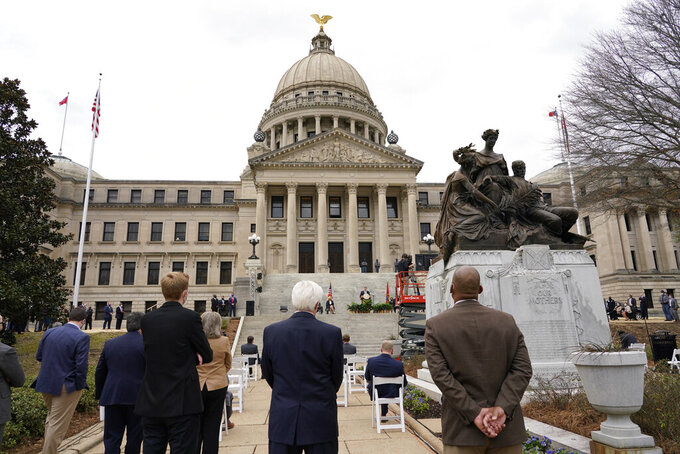 A sparse crowd of lawmakers, lobbyists and security, listen as Mississippi Republican Gov. Tate Reeves speaks about his policy priorities and the state's coronavirus pandemic response during his State of the State speech on Tuesday, Jan. 26, 2021, on the south steps of the state Capitol in Jackson, Miss. Reeves requested the outdoor venue and a limited number of attendees following covid protocol. (AP Photo/Rogelio V. Solis) 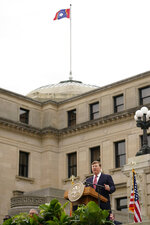 JACKSON, Miss. (AP) — Mississippi is “unconquerable” after a year dominated by the coronavirus pandemic and natural disasters including tornadoes that cut wide paths of destruction last Easter, Republican Gov. Tate Reeves said in his State of the State speech Tuesday.

Speaking on the south steps of the Capitol, Reeves renewed his call for eliminating the state's personal income tax and said he would sign a bill to increase teachers' pay. He called on legislators to make “wise investments” in workforce training.

And, he vowed that Mississippi will vaccinate people against the coronavirus as quickly as possible.

“We need to crush this virus and get back to our way of life,” Reeves said. “The virus is still here, and it cannot be solved by ignoring it. We have to defeat it, because Mississippians are done. We’re done burying loved ones who were lost to this virus. We’re done with overwhelmed hospitals. We’re done with the fearful talk of lockdowns and shutdowns. We’re ready for community again.”

Reeves served eight years as state treasurer and eight as lieutenant governor before becoming governor last January. His first year in the state's highest office was dominated by the pandemic, with the first virus cases found in Mississippi in March.

“I am here to say that our state is unconquerable,” Reeves said Tuesday. “We have taken every hit that can be thrown. We’ve been tested by every force of nature, disease and human frailty."

The governor said when he released his state budget proposals in November that eliminating the 4% and 5% personal income tax brackets would help Mississippi compete against other states in trying to attract new jobs.

“There are still many who say that we can’t lower taxes because it puts new government spending at risk,” Reeves said. “And I understand that it is often good politics to act like something from the government is a gift. In fact, the far left has played that tune for generations. But we have to be clear: The government doesn't have anything that it does not first take from a taxpayer.”

Reeves’ predecessor as governor, Republican Phil Bryant, signed a 2016 law that phases out the 3% income tax bracket, starting in calendar year 2018 and ending in 2022. Reeves was lieutenant governor then, and he helped push the plan to reality.

In the Democratic response to the governor's speech, Sen. Derrick Simmons of Greenville renewed his party's call for Mississippi to expand Medicaid, which is an option under the health care law signed in 2010 by then-President Barack Obama. Reeves and other Republican leaders have said they don't want to put more people on a government program.

“The shortsighted politics of Mississippi Republicans have cost Mississippi billions of dollars and left our hospitals hanging on by a thread,” Simmons said. “If Gov. Reeves will not expand Medicaid, it is past time for him and Republican leaders to come up with an alternative.”

The State of the State speech is usually held inside the Capitol, with senators, representatives, state Supreme Court justices and other officials sitting shoulder-to-shoulder in the House chamber. The speech was moved outside because public health officials recommend that people avoid crowded indoor events because of the highly contagious virus.

Reeves closed his speech Tuesday by saying his personal goal is to “cultivate empathy," which he said is in short supply in politics.

“Every Mississippian, every American, is on the same team,” Reeves said. “We all want to be treated with grace. And we're all created in the image of a perfect God.”

Simmons also called for a change in “corrosive" politics.

"As legislative Democrats, we are recommitting ourselves to the truth," Simmons said. “That means we will be honest when we get it wrong, and we will make sure to show gratitude when Republicans get it right.”