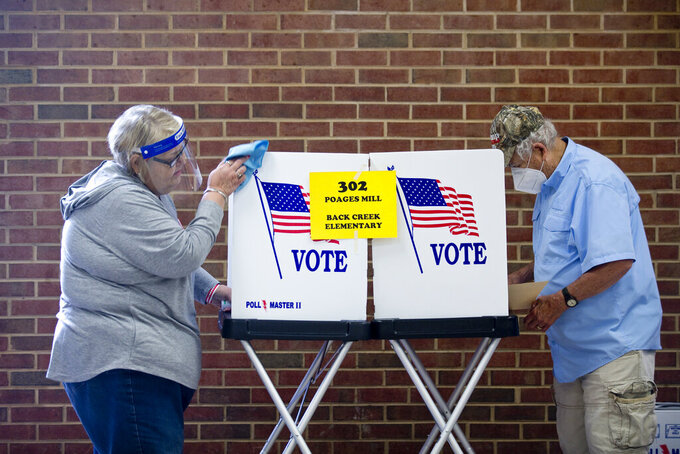 RICHMOND, Va. (AP) — The stage is set for a fierce rematch for what was one of the most hotly contested congressional seats in the country two years ago.

Luria defeated Taylor by about two percentage points in 2018, helping Democrats take control of the U.S. House and flipping a district that President Donald Trump won in 2016.

Taylor, a former Navy Seal who was endorsed by President Donald Trump, won handily against two other GOP opponents.

At a victory party he predicted an onslaught of negative advertising against him while previewing his lines of attack on Luria, who he said misleads voters about being moderate and is ineffective in Congress while representing a district that is heavily reliant on federal spending.

“She has no juice, she has no leadership,” Taylor said.

Luria, also a Navy veteran, made clear that she plans to highlight the cloud still lingering over Taylor’s last campaign. A handful of Taylor’s staff members were accused of forging signatures to place an independent “spoiler” candidate on the ballot to siphon votes away from Luria. Two former Taylor staffers have been charged. Taylor has maintained that he was unaware of any wrongdoing.

“The last thing Virginians need is a failed congressman who focuses on Twitter fights while trying to sweep his election fraud scandal under the rug,” Luria campaign manager Veronica Ingham said in a statement.

Taylor was going to run for the U.S. Senate this year but changed his mind to challenge Luria again.

Also Tuesday, Republicans picked Daniel Gade to be their nominee and face off against U.S. Sen. Mark Warner, who is seeking his third term as senator. And Democrats in the western part of the state selected physician Cameron Webb to run in a Trump-friendly district that Democrats hope is more competitive after social conservatives ousted the incumbent after he officiated a gay wedding.

The Senate race is expected to be much less competitive. Warner barely won six years ago against former Republican National Committee Chairman Ed Gillespie, but no experienced Republicans wanted to take Warner on this time around.

Once a key swing state where Senate elections were decided by small margins, Virginia has swung solidly blue in the Trump era as voters in the state’s growing suburbs reject the president’s agenda. Republicans haven’t won a statewide election in more than a decade.

Gade is a retired Army officer who was seriously injured in Iraq in 2005, losing a leg after his Humvee was hit by a roadside bomb. He advised President George W. Bush on military and disability issues and was Trump’s appointee to serve on the Equal Employment Opportunity Commission, but withdrew his nomination after a lengthy delay in the Senate over his confirmation. Gade previously taught at West Point and now teaches at American University.

If elected, Gade pledged not to be a “rubber stamp” for the president but said Trump is “good on the policies that I care about,” including religious liberty.

In Virginia's 5th Congressional District, which stretches from northern Virginia to the North Carolina border, Democrats on Tuesday picked Webb in a four-person race. Webb is a physician in Charlottesville who also holds a law degree.

U.S. Rep. Denver Riggleman lost a convention to Bob Good earlier this month despite having the backing of Trump and evangelical leader Jerry Falwell Jr., the president of Liberty University. Riggleman angered many Republicans in his district last summer when he officiated the wedding of two male campaign aides.

Good has pledged to restore “Judeo-Christian” values to Congress. He’s also a hardliner on immigration and wants English to be the official language of the U.S.

Turnout around the state was light Tuesday and the primaries were delayed two weeks because of the coronavirus outbreak. Voting precincts increased cleaning and physical markers to ensure social distancing. There was a surge in voting by mail, and the state allowed any registered voter to vote absentee due to the virus.

At the Hungary Creek Middle School in Glen Allen, outside Richmond, just a handful of voters turned up to vote early.

Shirley Painter, 78, a retired secretary, said she and her husband are concerned about the coronavirus, but wanted to come out and vote in person as they always do.

“I think we worry about it, but they say as long as we wear masks and wash our hands a lot we’ll be OK,” she said.