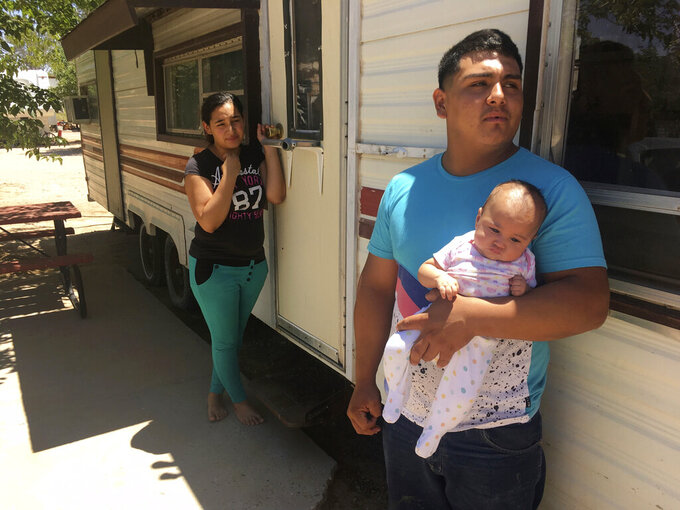 FILE - In this May 25, 2018, file photo, Jose Espinoza, 18, stands outside his trailer with his 4-month-old infant, Emmily, and wife, Maria Rodriguez, 19, in Vado, N.M. while speaking about making only $50 a day picking onions. New Mexico's child poverty rate rose slightly and continues to rank near the bottom nationally despite improvements in the state's economy, a child-advocacy group said Wednesday, Jan. 15, 2020. The 2019 New Mexico Kids Count Data Book, released by New Mexico Voices for Children, found 26% of the state's children in 2018 remained at or below the federal poverty line. That places the state back to 49th nationally in child poverty. (AP Photo/Russell Contreras, File)

RIO RANCHO, N.M. (AP) — Childhood disparities around malnutrition, graduation rates, and early deaths are worst among rural, black-majority counties in the American South and isolated counties with Native American populations, according to a new report.

Those inequities put these populations more at risk for the novel coronavirus, the report by Save the Children concludes.

Using federal data from 2018 and examining more 2,600 counties and their equivalents, the report found that about a third of the 50 worst counties are majority African American and a quarter are majority Native American.

“These are just stunning statistics,” said Mark K. Shriver, senior vice president of U.S. programs & advocacy at Save the Children. “Children growing up rural areas, for instance, are more likely to die before their first birthday at a rate to 20% than in large urban areas.”

The inequality comes from the lack of early childhood education, health care, and job training options in those areas, the report said.

So far, children in some of the poor counties cited in the report live among the areas hardest hit by COVID-19. New Mexico's McKinley County, which sits on the Navajo Nation — a tribe suffering amid the pandemic — is ranked near the bottom in child hunger and graduation rates.

According to the report, Louisiana, Mississippi, and New Mexico are the lowest-ranked states for these childhood disparities.

The report comes more than a half-century after the late U.S. Sen. Robert Kennedy — Shriver’s uncle — embarked on a tour across the country to highlight the nation’s most impoverished regions. Kennedy visited Mississippi and South Dakota’s Pine Ridge Indian Reservation and was transformed by the hunger and inequality he saw.

It also comes more than a half-century after President Lyndon Johnson’s Kerner Commission report, which sought to examine urban poverty and riots across the nation.

Former U.S. Sen. Fred Harris of Oklahoma, the last surviving member of the Kerner Commission, said he’s not surprised by the report since the number of U.S. residents in poverty has grown in 50 years.

“And most of that growth in poverty has been among children,” Harris said from his home in Corrales, New Mexico. “This is a great unfairness in our system.”

Associated Press journalist Russell Contreras is a member of the AP’s race and ethnicity team. Follow Contreras on Twitter at http://twitter.com/russcontreras