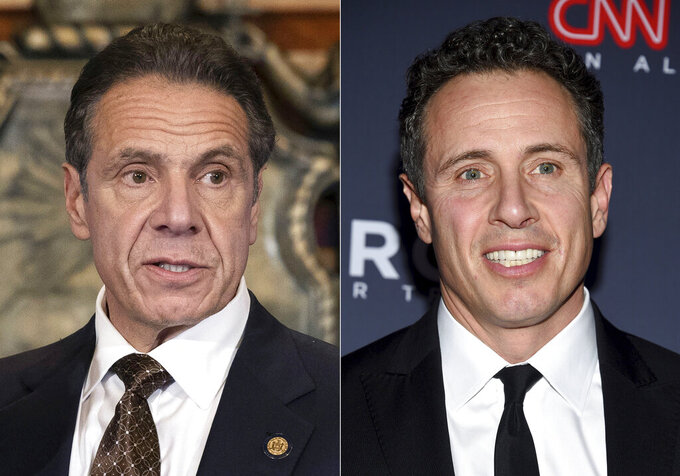 FILE -New York Gov. Andrew M. Cuomo appears during a news conference about the COVID-19at the State Capitol in Albany, N.Y., on Dec. 3, 2020, left, and CNN anchor Chris Cuomo attends the 12th annual CNN Heroes: An All-Star Tribute at the American Museum of Natural History in New York on Dec. 9, 2018. CNN said Thursday, May 20, 2021 it was “inappropriate” for anchor Chris Cuomo to have been involved in phone calls with the staff of his brother, New York Gov. Andrew Cuomo, where strategies on how the governor should respond to sexual harassment allegations were allegedly discussed.(Mike Groll/Office of Governor of Andrew M. Cuomo via AP, left, and Evan Agostini/Invision/AP)

NEW YORK (AP) — CNN said Thursday it was “inappropriate” for anchor Chris Cuomo to have been involved in phone calls with the staff of his brother, New York Gov. Andrew Cuomo, where strategies on how the governor should respond to sexual harassment allegations were allegedly discussed.

The network was responding to a story in The Washington Post that said Chris Cuomo had joined a series of conference calls with aides and advisers.

The host of CNN's “Cuomo Prime Time” encouraged his brother to take a defiant position and not resign, the Post said, quoting two people present on one of the calls that the newspaper did not identify.

CNN said in a statement that Chris Cuomo has not been involved in the network's coverage of the allegations, either on the air or behind the scenes, because he could not be objective and often serves as a “sounding board” for his older brother.

“However, it was inappropriate to engage in conversations that included members of the governor's staff, which Chris acknowledges,” the network said. “He will not participate in such conversations going forward.”

The network did not announce any disciplinary action against its show host.

On his show Thursday night, Chris Cuomo said being involved in the calls was “a mistake.”

“I put my colleagues here (at CNN), who I believe are the best in the business, in a bad spot,” the anchor said at the top of his show. “I never intended for that, I would never intend for that, and I am sorry for that.”

Asked about the Post story, Cuomo press secretary Richard Azzopardi said that “there were a few phone conversations, with friends and advisers giving the governor advice.”

The New York Democrat is facing allegations that he abused his power by inappropriately touching and sexually harassing women who worked with him or met him elsewhere. Accusations range from groping under a woman’s shirt and planting unwanted kisses to asking unwelcome personal questions about sex and dating.

Cuomo has apologized for making anyone feel uncomfortable, but said he never touched anyone inappropriately or made inappropriate advances. The state attorney general is investigating. A majority of state Democratic lawmakers have called on Cuomo to resign.

The Post story said that at one point, Chris Cuomo used the phrase “cancel culture” as a reason to hold firm. During a March 12 phone call with reporters where Andrew Cuomo said he would not resign, the governor said, “people know the difference between playing politics, bowing to cancel culture and the truth.”

Andrew Cuomo, 63, and Chris, 50, are both sons of former New York Gov. Mario Cuomo and have described themselves as best friends.

“The job of the press is to hold people who abuse their power accountable. Chris Cuomo has the loudest microphone at the biggest news station in the country. Entire power systems are structured to protect men like Andrew Cuomo. This is example infinity of why women don’t come forward.”

During the height of the COVID-19 crisis in New York last spring, CNN set aside its previous policy not allowing Andrew to appear on Chris' program. Many viewers found the resulting banter between the two entertaining before CNN reinstated its ban in June.

But those exceptions looked bad in retrospect when Cuomo received criticism for a New York state policy regarding COVID patients in nursing homes, and the subsequent harassment allegations. Chris Cuomo said on the air March 1 that he “obviously” couldn't cover the stories surrounding his brother.

It's generally considered inappropriate for people in the news media to offer advice to news figures. Fox News Channel figures Tucker Carlson and Sean Hannity have both acknowledged privately giving their opinions to former President Donald Trump, although Hannity has said that “I never claimed to be a journalist.”

Andrew Cuomo is also under investigation by a state legislative committee over allegations that his administration arranged for members of his family, including Chris Cuomo, to get special access to COVID-19 tests last year at a time when they were generally unavailable to the general public.