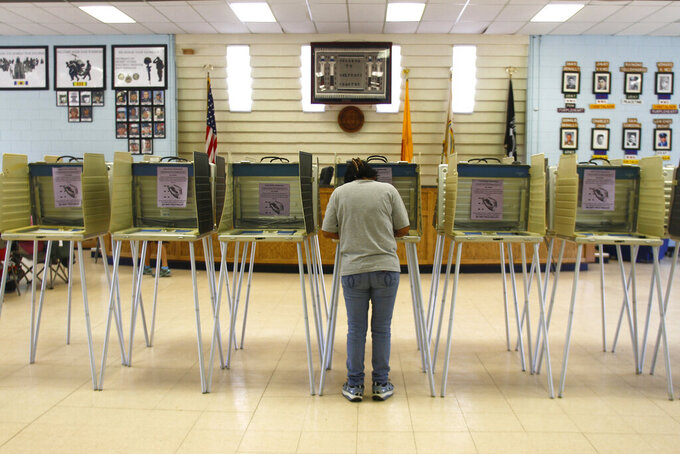 FILE - In this July 21, 2015, file photo, Carolyn Yazzie fills in her ballot at the Shiprock Chapter House in Shiprock, N.M., during the Navajo Nation's referendum election. Native American voting rights advocates are cautioning against states moving to mail-in ballots without opportunities for tribal members to vote safely in person. The Native American Rights Fund released a wide-ranging report on voting rights Thursday, June 4, 2020. In it, the group outlined the challenges that could arise as states move to rely more heavily on mail-in ballots. (Jon Austria/The Daily Times via AP, File)

In a wide-ranging report released Thursday, the Native American Rights Fund outlined the challenges that could arise: online registration hampered by spotty or no internet service, ballots delivered to rarely-checked Post Office boxes and turnout curbed by a general reluctance to vote by mail.

“We’re all for increased vote by mail,” said Jacqueline De Leon, a staff attorney with the group and a member of Isleta Pueblo in New Mexico. “We’re absolutely against all vote by mail. If there are no in-person opportunities, then Native Americans will be disenfranchised because it will be impossible for some of them to cast a ballot.”

A few states automatically mail ballots to every eligible voter. Others are drawing up plans to rely more heavily on a mail-in system for this year's elections amid the coronavirus pandemic and with social distancing guidelines in mind.

Native Americans are reluctant to embrace the system because of cultural, historical, socioeconomic and language barriers, and past experiences, the report said.

The report is a result of field hearings held in North Dakota, Wisconsin, Arizona, Oregon, California, Oklahoma, New Mexico, California and the Navajo Nation in 2017 and 2018. The Native American Rights Fund plans to use the findings to develop policy, suggest legislative or regulatory action and promote voting rights in Indian Country.

Native Americans didn’t become U.S. citizens until 1924, but some states restricted who was entitled to vote up into the 1960s, with laws saying Native Americans who weren’t taxed, who lived on reservations or were enrolled with tribes couldn’t cast a ballot. Southwestern states were the last holdouts.

Native Americans won or settled 86 election-related lawsuits they’ve filed over the years — a success rate of more than 90%, the report said. Among those were challenges over redistricting in Utah, voter ID requirements in North Dakota and language assistance for Alaska Native villages.

More than one-third of voting-age Native Americans — or 1.2 million people — aren't registered to cast a ballot, according to the National Congress of American Indians. While advocates have been pushing states to improve access to the polls, they’re also reminding tribal members to register and vote to enact change.

The coronavirus pandemic has highlighted inequalities in tribal communities, including access to running water, health care and housing. Those disparities won't improve without electing people to office who understand them, the report said.

“If we show up and we vote, then that gives them incentives to focus resources on us, and as our population continues to grow and we as a political force grow as a nation and as a people, that will help ensure that these minimum standards are met in Indian Country,” former Navajo Nation Attorney General Ethel Branch said during the hearings.

As the November elections approach, Native American advocates are pushing states to allow voting early, curbside, and at mobile voting stations to reduce crowding. They also want officials to designate hours for voters who are vulnerable to the coronavirus, enact social distancing and provide protective equipment for poll workers.

During the primary that wrapped up this week in New Mexico, there were concerns about potential voter suppression as some of the usual polling locations in pueblo and rural communities were not opened due to challenges brought on by the pandemic. In Santa Fe County, election officials said they didn't expect it to be an issue because more voters were using mail-in ballots.

In Congress, advocates are pushing for polling places on reservations to cut down on the distance tribal members must travel to vote, prepaid postage for mail-in ballots and the acceptance of tribal IDs.

The report highlighted some successes in New Mexico where the secretary of state created a Native American task force to tackle inequities and to include Natives in making election-related decisions. It also pointed to Washington state where tribal members can use a system of tribally designated buildings to register to vote, and pick up and drop-off ballots while polls are open.

De Leon said barriers to voting can make Native Americans feel like they are not part of the system.

“The irony is if you don’t participate, it will never be your system,” she said. “It’s a matter of knocking down those structural barriers. If it’s easier to vote, they are going to vote.”