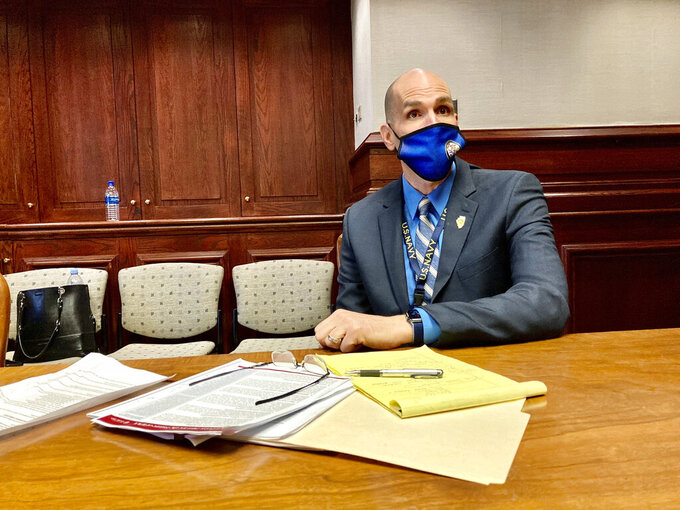 Terry Prince, Gov. J.B. Pritzker's designee as director of the Illinois Department of Veterans' Affairs, discusses changes in administration, communication, policies and infection control that he and others at the agency are implementing in response to a COVID-19 outbreak last fall at the LaSalle Veterans' Home. (AP Photo/John O'Connor)

Terry Prince, a 31-year Navy veteran and former senior adviser to the U.S. Surgeon General, has issued a six-point plan for improving readiness at the state’s veterans’ homes in Anna, Manteno, Quincy and LaSalle. The plan follows a blistering investigative report that laid out a string of miscommunications, lax policy and missed opportunities when the pandemic hit the home in LaSalle, 94 miles (151 kilometers) west of Chicago.

The report by the inspector general of the Illinois Department of Human Services, released Friday, noted that despite escaping all traces of the deadly respiratory illness for eight months after it entered Illinois, there was little done to devise protocols for preventing or managing infections. After the first four cases were reported Nov. 1, the virus spread to 60 residents and 43 employees as confused staff operated in an environment that was “inefficient, reactive and chaotic,” the report said.

“We need to train as if it’s always happening,” said Prince, who arrived in Illinois on April 1 from his post as superintendent of the Ohio Veterans Homes, where he administered three facilities. “When there is an absence of the virus we train even harder, so that when something does come to fruition, our people know exactly what to do and how to do it.”

The review found ineffective, alcohol-free hand sanitizer in abundant use and no one responsible for replacing it, staff members reporting for duty by taking their own temperatures and initialing results, and scant availability and use of personal protective equipment such as face coverings.

Confusion over evacuating a wing to prepare it for quarantining and other errors such as placing residents who tested positive for the coronavirus in a room with others who were not sick, then not monitoring the newly exposed residents afterward, compounded the problem.

Among Prince’s other initiatives are plans to develop clear, statewide policies applicable to each home; restructuring senior leadership with chain-of-command clarity and assurances that the homes are receiving proper clinical and administrative direction; filling key positions whose vacancies have doubled work for others; and providing all employees with an email address for receiving agency-wide notices and communicating their concerns.

Infection control will be a priority with the hiring of a director and creation infection-control committees at each home following standardized guidelines, Prince said.

“It's always been important but it did come to light, over the course of this crisis, the significant amount of work that’s involved in being an infection control specialist,” Prince said. “Prior to COVID-19 you would deal with things like pneumonia, flu, MRSA ... they were often a case-by-case basis. When COVID hit, you’re not only monitoring residents you’re monitoring every staff member who works there.”

The crisis struck LaSalle well into the period of COVID-19 entrenchment, and a year-and-a-half after a state audit recommended adopting consistent statewide policies as a result of a Legionnaire's disease outbreak at the Quincy Veterans' Home which led to 14 deaths and sickened more than 70 others. In December, the home's director, Angela Mehlbrech, was fired and at Gov. J.B. Pritzker's behest, the investigation was underway.

After three hours of critical questioning by a House committee in early January, director Linda Chapa Lavia, an Army veteran who had been a long-tenured member of the House herself, resigned.

LaSalle was not alone. There have been 15 COVID-19 deaths at Manteno and 25 at Quincy. Prince noted the enormity of dealing with “a worldwide virus that doesn’t play fair.”

“It spread across the country with a fierceness that no one could have ever predicted and unfortunately veterans homes across the nation were struggling in the same situation,” he said.

Inspector general's report on the COVID-19 outbreak at the LaSalle Veterans' Home: https://bit.ly/2Pzo7tc