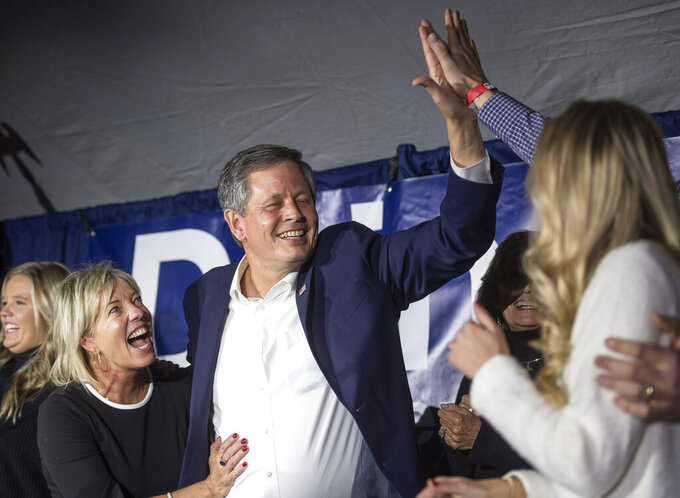 Sen. Steve Daines, R-Mont., celebrates with his family after his race was called by The Associated Press, early Wednesday, Nov. 4, 2020, in Bozeman, Mont. (AP Photo/Tommy Martino)

BILLINGS, Mont. (AP) — Democrats stood firmly atop Montana’s political scene just a short decade ago with control of the governor’s mansion, both U.S. Senate seats, state attorney general's office and every other statewide post but one.

No longer, following a Republican rout of Democrats in Tuesday’s election.

Sen. Jon Tester was the last Democrat of the bunch still standing in the wake of an Election Day stampede likely to cement Republican power in Montana for years to come.

Daines, Gianforte and U.S. House victor Matt Rosendale pushed near-identical themes: gun rights, the need to reopen the economy amid the coronavirus pandemic and unwavering backing for President Donald Trump. Each of the Republicans also deflected criticism over past votes and statements against government-backed health care by pledging to protect coverage for people with pre-existing conditions.

“I fully expected this," Rosendale told The Associated Press early Wednesday as his win was announced to cap the night for Republicans. “It's because the Republican Party has been very, very clear about their agenda and they have been very effective in pursuing and executing that agenda."

Political observers described another factor behind the Republican win: increasingly partisan national politics leaking into Montana's tradition of electoral independence. The state previously demonstrated a willingness to split tickets and elect Democrats, even while strongly supporting Republicans for president in every election over the past quarter-century.

Carroll College political analyst Jeremy Johnson referred to the creeping influence of national issues on local politics as the “cable news effect" and said it appeared to be growing more pronounced.

Tuesday's results marked the culmination of that transformation.

“I wanted to believe that 2016 was this anomaly, but it wasn’t," said Monica Lindeen, who held the state auditor's post from 2009 to 2017, the heyday period for Democrats. “Our whole country seems to be in this partisan gridlock and I’ll continue to remain hopeful that we can move away from that someday with the right leadership.”

While Trump presided over the nation as its descent into partisan politics accelerated, the beginning of the political shift that swept Montana pre-dates him.

Daines' 2014 Senate win came after another lieutenant governor under Bullock, John Walsh, dropped out late in the race. It gave Republicans the seat for the first time in more than a century.

Tester's win two years ago came despite a huge push by Trump to oust him that included four visits to Montana — the most ever by a sitting president. That helped embolden Democrats heading into 2020 and along with recent polls of voters suggested s upport for Trump had softened since his 20 percentage-point victory in Montana four years ago.

But Trump won the state Tuesday by about 15 percentage points, a much wider margin than the polls had suggested, and Daines, Rosendale and Gianforte also delivered unequivocal wins. None of the statewide races were close.

The consequences of the Republican dominance will come into clearer focus once Gianforte takes office in January. He's already indicated he would take a less prescriptive approach to the coronavirus pandemic than the business restrictions and mask mandates advanced under Bullock and Cooney, an issue with broad public health implications.

Gianforte “clearly did not want to get government overly involved in managing the response to the pandemic,” Johnson said. “Now where you draw the line, and exactly how, we’ll have to navigate that. Some of that may also be dictated by just how bad the pandemic becomes."

Gianforte's plans to boost the economy also could alter the state's course and include streamlined permitting for natural resources such as coal, oil, gas and timber. That's likely to trigger a strong pushback from conservation groups and Democrats in the minority in the Legislature. Mining for copper, gold and other resources earned the state its nickname, but also funneled huge riches to a relatively small number of people and left a legacy of polluted sites.

“I’m excited to execute the plan we put forward,” Gianforte told AP after his win. “It was a positive and optimistic vision.”