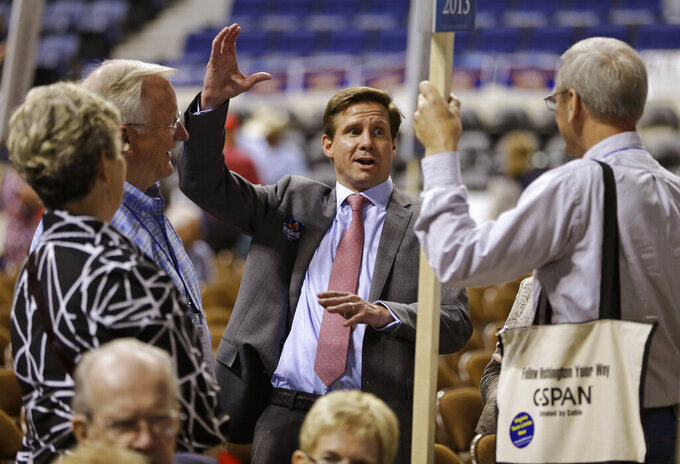 FILE - In this May 17, 2013 file photo, candidate for Lt. Governor of Virginia, Pete Snyder, center, gestures as he talks to delegates during the opening of the Virginia Republican convention in Richmond, Va. Snyder has joined the crowded field seeking the Republican nomination for Virginia governor. The CEO of a capital investment firm, Snyder said in a campaign video released Tuesday, Jan. 26, 2021 that he was running as an innovator, disruptor and problem solver seeking to shake up state politics after “eight years of failed leadership” by Democrats in the governor’s mansion. (AP Photo/Steve Helber, File)

The CEO of a capital investment firm, Snyder said in an interview that the state government's response to the coronavirus pandemic was the top reason he jumped into the race. He criticized Virginia's relatively slow rollout of testing at the start of the pandemic, what he called “on-again-off-again” regulations on small businesses, and the fact that many school districts have not returned to in-person instruction.

“When we were faced with the worst crisis that we've seen in over 100 years, our governor and many of the career politicians in Richmond simply fell down on the job,” he said.

Snyder, 48, who previously founded a social media marketing company, New Media Strategies, unsuccessfully sought the party's nomination for lieutenant governor in 2013. He, his wife and daughter live in Charlottesville, and he now runs Disruptor Capital, an angel capital investment firm that focuses on “funding and growing disruptive technologies, ideas and entrepreneurs,” according to its website.

Snyder is joining a wide GOP field that in recent weeks has seen two other Republicans jump in or indicate they are running.

Sergio de la Peña is a retired Army officer who touted his early support for former President Donald Trump in a campaign launch video. Glenn Youngkin, who retired as co-CEO last year from the investment firm the Carlyle Group, has filed paperwork signaling a run. Like Snyder, neither has served in elected office before.

Also in the race is firebrand conservative state Sen. Amanda Chase, as well as state Del. Kirk Cox, who was the powerful speaker of the House when Republicans last controlled the chamber.

The crowded Republican field indicates that the GOP is bullish on its chances of winning in the state even as it has grown increasingly blue in the past decade, particularly during the Trump era. No Republican has won a statewide race in Virginia in more than a decade.

Snyder said he aims to win the GOP nomination by building a coalition that includes every corner of the Republican Party.

He described himself as a Trump supporter who voted twice for the former president. But he said he'd also seek to win over independents and Democrat-leaning voters, “folks who haven't given Republicans the time of day in the past 10 years but they are angry because the schools are still closed.”

The Democratic Party of Virginia and the Democratic Governors Association released statements characterizing Snyder as a far-right conservative out of touch with Virginia voters.

Princess Blanding, the sister of a Black man who was killed by Richmond police in 2018, also recently launched a third-party bid.

The state GOP has opted to pick its nominee at a convention in May. Democrats will choose their candidate in a June primary.