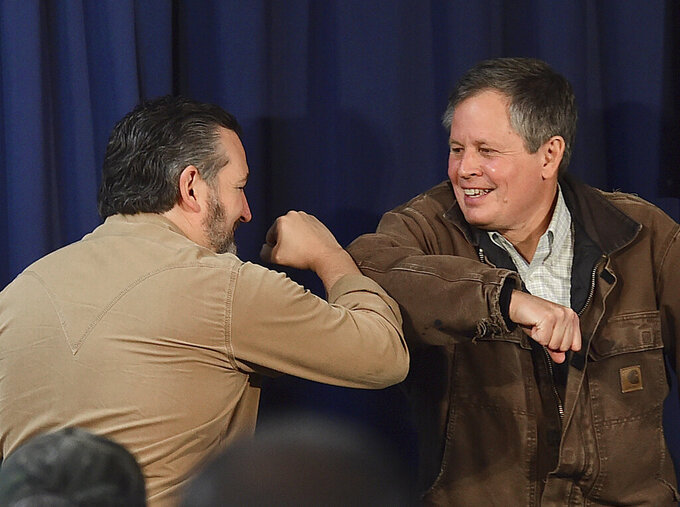 BILLINGS, Mont. (AP) — Republican Steve Daines was reelected Tuesday to Montana's U.S. Senate seat that he wrested from Democrats six years ago after overcoming his opponent's huge cash advantage to keep the post in GOP hands.

His 2014 victory broke a Democratic lock on the Senate seat that had lasted more than 100 years. His reelection Tuesday further solidifies Republican political dominance in the state and came on a night that saw his former boss and longtime friend, Greg Gianforte, elected Montana governor.

“I’m very humbled and pleased to see such strong support tonight all across Montana,” Daines told The Associated Press. “This once again shows the great common sense that Montanans have. They are not going to be swayed by a bunch of out-of-state money flooding into the state.”

Bullock is a two-term Montana governor who entered the race in March after dropping a presidential bid that attracted little support.

He congratulated Daines in a concession statement issued by his campaign.

“I ran for office twelve years ago with one goal in mind: to make a meaningful difference in people’s lives," Bullock said. “Montana has been a gift to me, and given me more than I could ever give back. I have been so grateful to have served as Montana’s Governor and Attorney General.”

The race was among a handful nationwide expected to decide which party controls the Senate. Political groups and the campaigns poured more than $100 million into the contest.

That's a record-shattering figure for the sparsely populated state that dwarfed spending in much larger battlegrounds and subjected residents of Big Sky Country to a barrage of advertisements virtually any time they turned on their computer, television or radio or opened their mailbox.

Rosendale's victory in the House race will keep the seat Republican in a GOP victory streak that dates to 1997.

“The people across this state, they see that when I make promises, that I uphold my promises regardless of how many millions of dollars are spent trying to refute that fact," Rosendale told the AP. “I was able to expand access to high quality, affordable health care and maintain coverage for pre-existing conditions."

The former real estate developer hitched his campaign to Trump and stuck to the Republican party line, promising to protect the Second Amendment and end illegal immigration.

Williams lost her bid to become Montana’s first congresswoman since Jeannette Rankin won the seat in 1940. She also lost in 2018.

In a concession statement issued Wednesday morning, Williams said that while the election is ending, the challenges facing Montana and the country linger.

“We must come together to fight for health care that works for all of us, and an economy that gives every Montanan the opportunity to craft and achieve their American dream," Williams said.

Trump's handling of the coronavirus and the economy has loomed over both races, but the president didn't come to Montana to stump for either Republican candidate.

After Trump easily won Montana in 2016, Daines emerged as one of his loyalists and stuck with the president through the coronavirus pandemic, a faltering economy and civil unrest stirred by police killings of people of color.

Daines, a former business executive, was serving his first term in Congress six years ago when Democratic Sen. Max Baucus resigned to become ambassador to China. That opened the seat for the first time since 1978 and Bullock appointed then-Lt. Gov. John Walsh to fill it. Democrats hoped the ploy would give Walsh an advantage but he dropped out late in the race amid a plagiarism scandal, clearing the way for a Daines victory.

Republican voter Debbie Rowe, an insurance agent from Billings, said Daines had been a “great senator” during his first term. She dismissed Democratic allegations that Daines would sell off or transfer public lands.

“When you know the person you can tell when it’s not necessarily the truth,” Rowe said.

Bullock was a private attorney and served two terms as Montana attorney general before his 2012 election to governor. While seeking the 2020 Democratic nomination for president he adamantly rejected a Senate run, and moved to the left on issues including guns, which Daines would later use against him.

Under pressure from Democratic party leaders including former President Barack Obama, Bullock threw his hat in the ring in March, sticking with the themes that drove his presidential bid: expanded health care access and a pledge to bring a Montana ethos of practical problem solving to Washington.

Within a week of his entering the Senate race, the arrival of the coronavirus upended the state and Bullock was in the limelight as he issued orders closing schools and restaurants followed by a general stay-at-home directive.

In its early months the pandemic appeared under control and Bullock’s campaign highlighted the state’s low infection rates. That gave way to soaring case numbers by fall, but Bullock hesitated to impose new restrictions and Daines criticized some that were already in place, such as spectator limits at school sporting events.