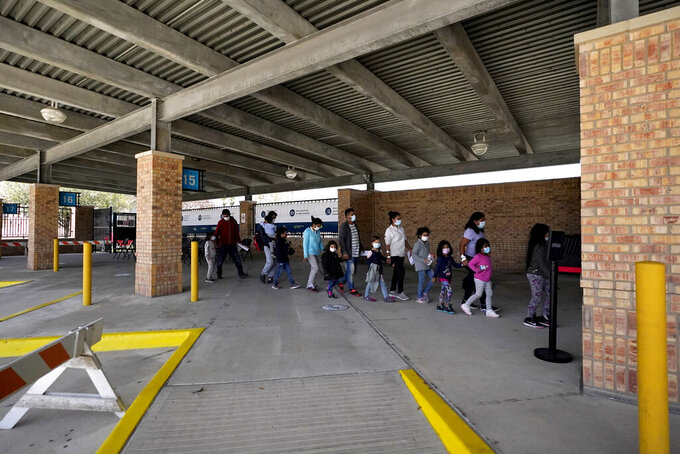 Migrants stand in line after being released from U.S. Customs and Border Protection custody at a bus station, Wednesday, March 17, 2021, in Brownsville, Texas. Team Brownsville, a humanitarian group, is helping the migrants reach their final destination in the U.S. A surge of migrants on the Southwest border has the Biden administration on the defensive. An official says U.S. authorities encountered nearly double the number children traveling alone across the Mexican border in one day this week than on an average day last month. (AP Photo/Julio Cortez)

Republicans still divided over former President Donald Trump's legacy are seizing on his signature campaign issue, turning their focus to immigration as they try to regain the political upper hand.

Faced with President Joe Biden’s early popularity, good news about vaccinations, and Americans' embrace of the COVID relief bill Washington Republicans opposed, the GOP is leaning in on the highly charged issue amid a spike in border crossings. They hope immigration can unite the party heading into next year's elections, when control of Congress is at stake.

“Heading into the midterms, I think that Republicans are increasingly realizing that this can be one of the most potent issues, both to motivate our voters, but equally as important, to appeal to" swing voters — especially in suburban swing districts — who voted for Democrats in 2020, said former Trump aide Stephen Miller, the architect of his immigration policies. He said the issue has been a subject of discussion in his recent conversations with lawmakers as child border crossings have surged, straining U.S. facilities.

The situation at the Southern border is complex. Since Biden's inauguration, the country has seen a dramatic spike in the number of people encountered by border officials, with 18,945 family members and 9,297 unaccompanied children encountered in February — an increase of 168% and 63% from the month before, according to the Pew Research Center. That creates an enormous logistical challenge, since children, in particular, require higher standards of care and coordination across agencies.

But that hasn't stopped Republicans from seizing on the issue, led by Trump himself. They blame Biden, who has been deeply critical of Trump's approach, for rolling back many of the former president's hardline deterrence policies. And they liken Biden's new, kinder tone to an invitation to would-be border crossers.

“They’re destroying our country. People are coming in by the hundreds of thousands," warned Trump in an interview Tuesday night with Fox News Channel. “And, frankly, our country can’t handle it. It is a crisis like we have rarely had and, certainly, we have never had on the border.”

“It's more than a crisis. This is a human heartbreak," said House Republican Leader Kevin McCarthy, who led a delegation of a dozen fellow House Republicans to El Paso, Texas, on Monday.

“This crisis is created by the presidential policies of this new administration," he said.

Texas Sen. Ted Cruz, a potential 2024 presidential candidate who is planning to lead his own Senate delegation tour to the Texas-Mexico border next Friday, accused the administration of having, “in effect, issued an invitation for unaccompanied children to come to this country."

Even Sen. Mitt Romney, one of Trump's most prominent Republican critics, faulted Biden's moves, including the halting of construction of Trump's signature border wall project.

“What’s happening at our southern border is a real crisis, and the Administration is making it worse by unlawfully freezing border wall funding appropriated by Congress,” Romney tweeted after signing onto a letter with 39 other Republican senators criticizing the new approach to the border.

Democrats and immigration activists see it differently. They deride the policies Trump implemented to deter asylum as cruel and inhumane and an abdication of the country’s humanitarian responsibilities. That includes the decision to forcibly separate more than 3,000 children from their parents, with no system in place to reunite them.

But policies like “Remain in Mexico," which forced asylum seekers to wait across the border as their cases were being adjudicated, and the expulsion of unaccompanied children were effective, and the number of migrants crossing the southern border declined precipitously, further slowed by the pandemic.

Beds were taken offline and staff downsized even as immigration experts on both sides of the aisle and career Homeland Security officials cautioned the numbers would likely begin to rise again once the pandemic subsided.

Advocates also note that apprehensions of single adults have been spiking since April 2020, long before Trump left office. And they accuse the last administration of enacting policies that clogged the immigration system — making it take longer to move people through the system — and failing to build capacity when numbers began rising. Biden transition officials, for instance, urged the outgoing administration to increase capacity, but were met with inaction. Miller said career officials they'd chosen to work with the incoming administration warned numbers would rise exponentially if policies were reversed.

“This was purposeful. They made it harder for the process to work efficiently ... there’s no question," said Peter Boogaard of FWD.us, a pro-immigration reform group. "The Trump administration did everything in their power for four years to make the already broken immigration system as cumbersome and ineffective as possible. And once they lost, they went out of their way to do as little as humanly possible to make sure the next administration was set up to succeed on this at all.”

In an interview with ABC News’ George Stephanopoulos on Tuesday, Biden defended his handling of the situation. He said his administration was working with the Department of Health and Human Services and the Federal Emergency Management Agency to add more bed space, putting together new systems for connecting arriving children with relatives already in the country, and setting up a system for people to apply for asylum in their own countries.

In the meantime, he urged those considering the journey to stay put. “Yes, I can say quite clearly: Don’t come over," he said. “Don’t leave your town or city or community."

In the meantime, Republicans see Biden as boxed-in politically, with limited options for dealing with the border.

“The administration has said that basically, everything that we did — you name the policy ... they said that all of them are fill-in-the-blank adjective. They've described them in the most incendiary and condemnatory fashion possible," said Miller. "And obviously my view is, of course, the opposite. But the point that I'm making is when you do that you give yourself no room to adjust course. ... You leave yourself nowhere to go.”

“They’re kind of stuck in a corner,” agreed Mark Krikorian, executive director of the Center for Immigration Studies think tank, which advocates on behalf of more restrictive immigration policies. Because Biden ran as the anti-Trump, he argued, the president has few options for deterring future migrants.

“And that’s why you’re seeing so much glee, in some respect,” he said. “It is a kind of delicious irony that Biden’s having to reopen detention centers that Trump had closed because he succeeded in shutting down the traffic."

Former House Speaker Newt Gingrich, a longtime Trump ally, said he expects the border to become a top issue if the numbers continue to grow.

“If they don’t control this, it’ll be a huge issue this year, and it's an issue that gets you into public health, into the issue of defending America and whether there are borders," he said.