Rescue aid package may reduce inequality, but for how long? 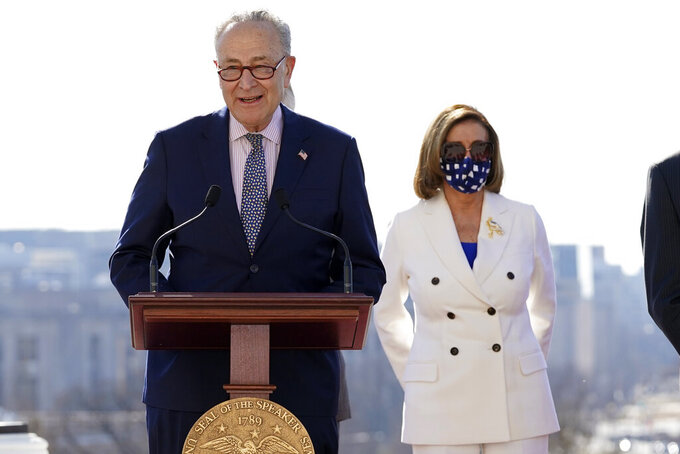 WASHINGTON (AP) — Democrats have celebrated President Joe Biden’s $1.9 trillion COVID-19 relief plan as a blow against one of America’s most entrenched economic woes: The vast inequality that divides the richest from the rest — a gap made worse by the viral pandemic.

Hailed as the biggest anti-poverty package in generations, the plan delivers huge benefits to low- and middle-income families. It sends $1,400 checks to most adults and extends $300-a-week unemployment aid for six months. Perhaps most significantly, it greatly expands a child tax credit and turns it into steady income for poor families. All told, experts say, the package will reduce child poverty by nearly half.

Yet for how long?

As ambitious and expensive as it is, the American Rescue Plan, which Biden signed into law Thursday, stands to go only so far in reducing income and wealth inequality.

Its boldest measures, including a massive tax cut for the poorest families, are only temporary. To make a lasting difference, these provisions would have to be extended, probably in the face of stiff resistance from Republicans. And as an emergency response to a health and economic crisis, the legislation would do little to address the outsize gains in earnings and wealth that the richest tier of Americans have accumulated.

From 1979 to 2019, the wealthiest 1%’s share of pre-tax income jumped from about 11% to 19%, according to the World Inequality Database, maintained by Gabriel Zucman, an economist at the University of California, Berkeley, and other experts on inequality. And that group’s share of wealth — including real estate and stock portfolios — surged from roughly 23% to 35% in the same period.

“To further reduce inequality, Congress would need to increase taxation at the top end — in particular, the taxation of wealth and capital income,’’ Zucman said. “There is a real risk, otherwise, that wealth concentration, which has surged over the last four decades, will keep rising in the post-COVID world.’’

For now, needy families will receive a substantial new financial cushion from the expansion of the child tax credit — though only until the expansion expires at the end of this year.

Under current law, most taxpayers can cut their federal tax bill by up to $2,000 per child. The rescue plan raises that to $3,000 for each child ages 6 to 17 and $3,600 for children under 6. Families eligible for the full credit will receive a chunk of the benefit as a monthly payout from July through December — $250 a month per child ages 6 to 17 and $300 a month for each child younger than 6.

The legislation makes the credit even more generous by for the first time providing it fully to families no matter how low the taxes they owe. To conservative critics, who have opposed the Biden package, the no-strings-attached approach to federal benefits will reduce the incentive to work.

All told, according to Columbia University’s Center on Poverty and Social Policy, the rescue package stands to slash child poverty by 45%, including declines of 52% for Black children and 62% for Native American children,

And according to the nonpartisan Tax Policy Center, the provisions of the legislation involving the federal income tax will give an average $2,960 tax cut to the poorest fifth of Americans, thereby raising their after-tax income by roughly 21%. For those in the middle fifth, the legislation would cut taxes by $3,720 and increase take-home pay 6%. But for the top 0.1% of earners, the measure would reduce after-tax income by an average of about $970.

Still, inequality runs so deep in the United States that even the nearly $2 trillion in the Biden package alone won't uproot it. Since the pandemic struck, the disparities have likely widened. A stock market rally and sizable gains in home values have enriched affluent households, while low-income workers have been disproportionately hurt by unemployment. Inequality.org, which is affiliated with the left-leaning Institute for Policy Studies, reports that the collective wealth of the world’s top 657 billionaires has rocketed by $1.3 trillion in the past year.

Conservatives argue that the best thing to help the poor is a robust economy and that Biden’s plan could backfire. They argue that the $1.9 trillion package is too bloated, that many of its benefits, like aid to recovering cities and states, are unnecessary and wasteful and that the magnitude of spending will overheat an economy that's already recovering from the recession.

An excessively fast economy with rising inflation might, in turn, compel the Federal Reserve to raise interest rates to fight inflation and cause the recovery to come to a premature end — too soon to benefit most of the poor. In the wake of the 2007-2009 Great Recession, after all, wages for lower-income workers didn’t really start to pick up until 2015.

Yet supporters, like Thea Lee, president of the liberal Economic Policy Institute, say they believe the rescue package will make a meaningful difference in lifting up the most vulnerable families, even though many of its major provisions come with an expiration date.

“I would give it high marks for reducing income inequality, recognizing that it’s not meant to be a long-term structural change,” she said. “It’s a one-time relief package.’’

Lee said she predicts that the expanded child credits will prove “so popular that they will get extended’’ and that policymakers will consider raising taxes on the richest once they need to find money to pay for Biden’s other plans, especially a big public works program. They could get a start, she said, by providing more money to an underfunded Internal Revenue Service to conduct more audits, raising revenue by targeting tax cheats at the top of the income scale.

Biden’s plan had originally called for gradually raising the federal minimum wage from $7.25 an hour to $15 by 2025, a move that would raise incomes at the bottom and thereby narrow the income gap.

The minimum wage hike didn't survive deliberation in the Senate. But Democrats hope to revive it.

"To us, it was both fair and economically smart to raise the minimum wage,’’ said Lee, a former AFL-CIO official. “We hope this is not the end of the conversation.’’