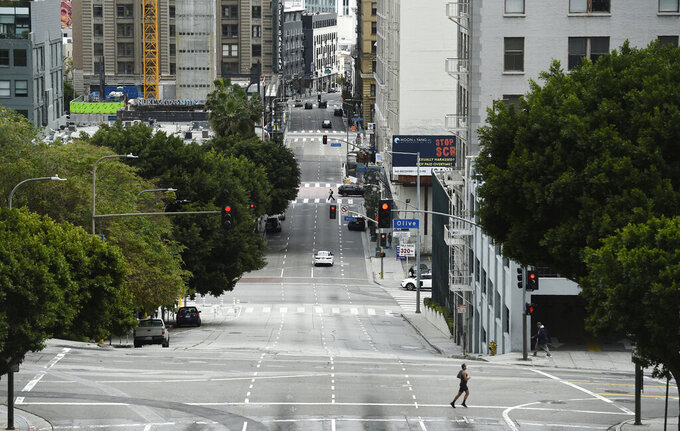 A jogger crosses a deserted 4th Street as stay-at-home orders continue in California due to the coronavirus, Friday, April 10, 2020, in downtown Los Angeles. (AP Photo/Chris Pizzello)

LOS ANGELES (AP) — Fresh snow in the mountains but no way to play in it. Tempting beaches after a week of rain but walking on them could bring a $1,000 fine. Easter egg hunts at local parks? Pretty much out.

As 40 million Californians entered their fourth weekend under statewide stay-at-home orders designed to slow the spread of the coronavirus, restrictions tightened further at recreation spots that often see their largest crowds during the Easter holiday.

Most major sites and many beaches already were closed to public use but across California, social-distancing orders were expanded through the weekend to cover many regional and local parks, trails and other public spaces.

Easter weekend is typically one of the busiest of spring at state parks, which include redwood forests, pristine beaches and idyllic picnic spots. This year, the parks department has asked people not to visit.

Gov. Gavin Newsom implored people Friday not to be complacent even as the state's top health official said the COVID-19 outbreak might not be as devastating as officials had feared — due in large part to people heeding orders to avoid close contact with others and remain at home as much as possible.

Dr. Mark Ghaly, secretary of the California Health and Human Services Agency, said models state officials have created to track the virus had been showing a peak by the middle of next month but the picture has improved as people limited their movement.

“Our peak may not end up being as high as we actually planned around and expected,” Ghaly said.

California has more than 21,000 confirmed COVID-19 cases and nearly 600 deaths, according to data compiled by Johns Hopkins University, figures far lower than New York, where the infections have been most prevalent and deadly.

“Let’s continue to hold the line. Let’s just do this together. Give us a few more weeks to see where these trend lines go,” Newsom said.

For most people, the new coronavirus causes mild or moderate symptoms, such as fever and cough that clear up in two to three weeks. For some, especially older adults and people with existing health problems, it can cause more severe illness, including life-threatening pneumonia.

Los Angeles Mayor Eric Garcetti, who ordered all parks closed from Saturday evening through Monday morning, also extended the city's remain-home order to May 15 and warned that easing it too soon might open the door to more infections.

“I know that’s what makes this frustrating," Garcetti said. ”People (are) like: ‘We’re doing such a good job. Isn’t there a reward?’ The reward isn’t getting out right now. That reward is knowing that people aren’t dying.”

Los Angeles County released a model that showed that, even with the continued success of current social distancing, up to 30% of its estimated 10 million residents could be infected with COVID-19 by midsummer.

County officials said all botanic gardens, lakes and parks will be closed on Sunday to prevent an influx of Easter visitors.

Beverly Hills on Friday enacted a new order requiring people to wear masks whenever they go out, even if just to walk the dog.

In Long Beach south of Los Angeles, the city warned that local parks will be off-limits even for walking.

“This weekend, the police will be handing out citations,” Mayor Robert Garcia warned, adding that “we’ve been giving out warnings for a long time.”

In Orange County, Santa Ana police planned to shut down anyone attempting the Easter tradition of car cruising. In the past. hundreds of cars have gathered Easter night on Bristol Street, often drawing large crowds.

A blackball flag was raised Friday morning over the lifeguard tower at the Southern California surfing mecca called the Wedge, requiring surfers to get out of the water as Newport Beach implemented new rules barring surfing between 10 a.m. and 5 p.m.

In the inland region east of Los Angeles, authorities warned that the hugely popular San Bernardino Mountains were closed to snow play and parking restrictions would be enforced. While ski resorts have closed, many city dwellers like to drive up into the mountains and park by the road to allow youngsters to frolic in the drifts.

Along the scenic central coast, parks in Big Sur were closed and while Monterey beaches were open, police planned patrols to stop people from clustering.

In the San Francisco Bay Area, where skies were expected to be clear and sunny after a week of rain, no-parking areas have been set up around Marin County parks after visitors kept showing up to walk trails, clogging the roads with cars. Scofflaws could face $100 fines.

However, Bay Area neighbor Oakland was taking a different approach by closing 74 miles (119 kilometers) of streets — 10% of the total — to vehicles beginning Saturday to create more space for people to get outside for exercise.

“By opening our streets to bikes, joggers and pedestrians we are giving Oaklanders more room to spread out safely,” Mayor Libby Schaaf said at an outdoor news conference Friday where she and city officials pulled face masks aside to speak. Schaff said she hoped the decision will “help give some joy," although some residents disapproved.

“Isn’t the message to stay home?” said Aura Campa, who lives near Oakland’s Lake Merritt but has been strict about staying home the past few weeks. “If they close the streets, they’re inviting everyone to come out and party. I don’t agree with it. I’m completely against it.”

The COVID-19 measures also have changed the way people worship, with churches and synagogues closed and many Passover and Easter services streamed online. Some churches are being permitted to hold drive-in services, where congregants listen in their cars.