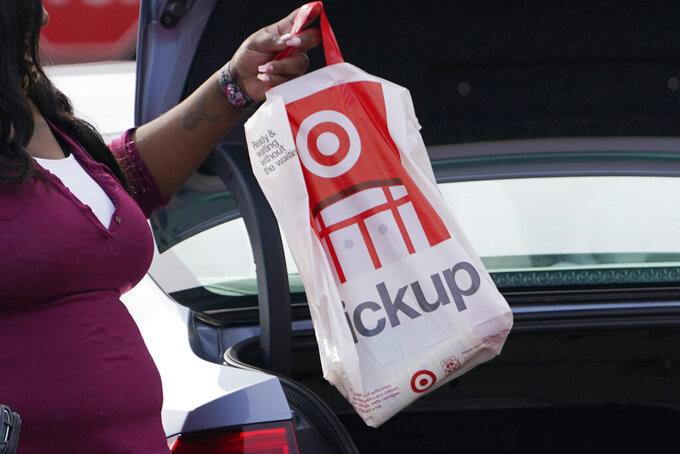 FILE - In this Nov. 5, 2020 file photo, a Target employee places a curbside pickup purchase into the trunk of a customer in Jackson, Miss. The nation’s largest retail trade group says Friday, Jan. 15, 2021, that holiday sales soared 8.3%, far exceeding its forecast even as the coronavirus kept shoppers away from physical stores. (AP Photo/Rogelio V. Solis, File)

The National Retail Federation had expected growth in a range of 3.6% to 5.2% for the November and December period compared to the year-ago period.

The outsized gains show how the pandemic has caused a major shift in spending away from restaurants and travel and more toward buying goods that focus on activities around the home like home furnishings, food and activewear. That trend has benefited retailers. The retail sales figures exclude sales from autos, restaurants and gas.

Moreover, even within the retail industry, big box stores like Walmart and Target are dominating the landscape, enjoying big sales gains at the expense of mall-based stores that were forced to temporarily close during the spring and early summer and still face restrictions. Shoppers are consolidating their trips and favoring stores that offer a wide range of goods under one roof as they look to minimize the exposure of the virus.

The National Retail Federation also said that shoppers are looking for opportunities to celebrate during tough times.

“Faced with rising transmission of the virus, state restrictions on retailers and heightened political and economic uncertainty, consumers chose to spend on gifts that lifted the spirits of their families and friends and provided a sense of normalcy given the challenging year, ” said Matt Shay, CEO of the trade group, in a statement.

The non-seasonably adjusted holiday figures, contrast with a downbeat report Friday from the Commerce Department that retail sales fell a seasonally adjusted 0.7% in December from the month before. The government numbers, which include restaurants, gas and autos, also fell in October and November, even though many retailers tried to get people shopping early for their Christmas gifts by offering deals before Halloween.

However, the government reported a 3.7% retail sales gain in November and a 2.9% gain in December compared to the year-ago periods.