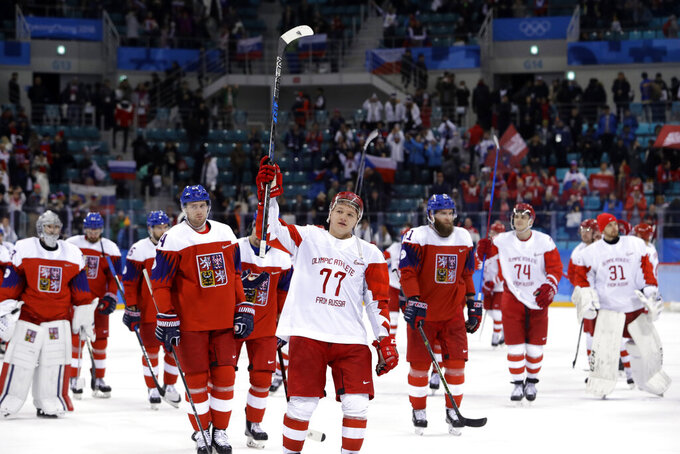 FILE - Russian athlete Kirill Kaprizov (77) celebrates after the semifinal round of the men's hockey game against the Czech Republic at the 2018 Winter Olympics in Gangneung, South Korea, in this Friday, Feb. 23, 2018, file photo. Olympic Athletes from Russia won 3-0. The Minnesota Wild, who have not won a playoff series in six years, seek to capitalize on the spark created by Russian rookie Kirill Kaprizov and lean on stalwarts like Zach Parise, Ryan Suter and Jared Spurgeon to make strides in this abbreviated season. (AP Photo/Matt Slocum, File) 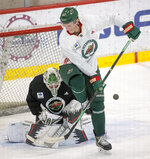 For the first time since the Zach Parise-Ryan Suter era began eight seasons ago, the Minnesota Wild have made major changes to the roster.

Perhaps the renovation will prove to be just what the Wild needed to skate out of the middle-of-the-pack rut they've been in for the majority of their existence.

Or maybe Kirill Kaprizov is himself the jolt they've been lacking all along. The 23-year-old right wing from Russia has finally entered the picture.

“You can definitely see his skill level. You can see he’s got a knack for scoring,” Parise said after the team's first practice on Monday. “He’s going to be an exciting player for us for a long time.”

The 5-foot-9, 185-pound Kaprizov, who was drafted in the fifth round all the way back in 2015, tallied 113 goals and 117 assists in 293 career regular season Kontinental Hockey League games. At the Olympics in 2018, he scored in overtime to win the gold medal match against Germany.

Kaprizov has become Minnesota’s most-anticipated prospect since Marian Gaborik debuted for the expansion franchise in its inaugural 2000-01 season, the type of game-changing player who has long been missing here. Gaborik remains the only player in Wild history to post a one-point-per-game average, having met that mark three straight years from 2005-08.

“Our expectations are that he’s a great teammate and he works his butt off every shift. We know he’s going to have a special talent, a special skill level, and we’re obviously excited about that, but we want him to conduct himself like we ask of anybody,” coach Dean Evason said.

Evason, the interim replacement when Bruce Boudreau was fired last year, was given full-time status by general manager Bill Guerin when the Wild returned from the pandemic pause. Though this will be another virus-altered season, with only a 10-day training camp and no exhibition games, Evason has more leeway to fully implement his preferred fast-tempo, puck-possession system.

“The other way wasn’t working,” said Parise, who has won only two series in the playoffs with Minnesota and none since 2015. “So I think we’re all excited about a new style, an upbeat style.”

With Parise and Kaprizov the leading candidates to flank the first line, Kevin Fiala will also be tasked with producing at a top-six level. He led the Wild last season with 54 points in 64 games and scored three times in their four-game qualifying-round loss in the expanded playoffs. Over the last 18 games before the COVID-19 outbreak, Fiala had 14 goals and 12 assists.

“He doesn’t have to be the focal point. We want him to be a very good player and a big piece of the puzzle, but we need everybody to do that,” Guerin said. “I think Kevin realizes how good he can be, and we’d like to see him do that within the game plan that Deano sets forth.”

Right wing Mats Zuccarrello is recovering from offseason surgery on his arm, making his status uncertain. Goalie Alex Stalock will likely be sidelined longer, with an unspecified upper-body injury. That will leave free agent addition Cam Talbot as the main man in the net, with Kaapo Kähkönen next in line for duty with nine sets of back-to-back games on the schedule.

Five of the top 15 players on the points list for the Wild last season have departed, with Eric Staal and Mikko Koivu the most glaring absences. Guerin added three veterans to help fill the void at center: Nick Bjugstad, Nick Bonino and Marcus Johansson.

When the NHL temporarily realigned to manage continuing COVID-19 restrictions with division-only competition, the Wild were placed in the West Division with fellow Central rivals Colorado and St. Louis. Anaheim, Arizona, Los Angeles, San Jose and Vegas are the other members.

They'll start the 56-game season in Southern California on Jan. 14 for the first of two games against the Kings, followed by two more against the Ducks. The home opener is Jan. 22 against the Sharks, commencing six straight games at Xcel Energy Center.