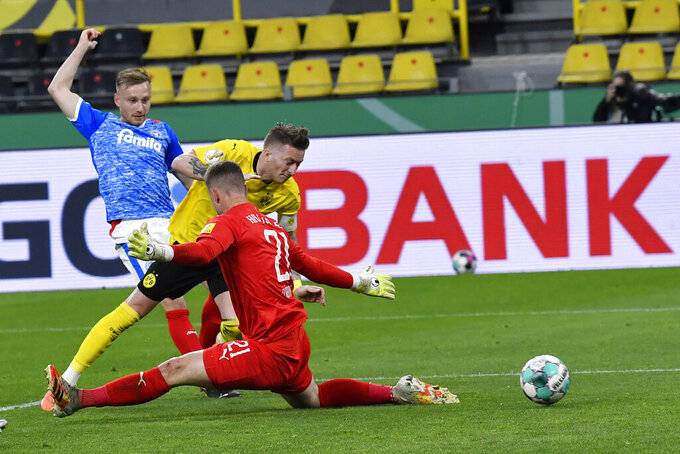 Dortmund's win was never in doubt as all the goals came in the first half against a Kiel team which had been pushed to the limit by two quarantines for coronavirus outbreaks this year and a packed schedule.

Reyna put Dortmund in front from the 16th minute with a shot from the edge of the box off a pass from Jadon Sancho.

Reyna made it 2-0 seven minutes later when the midfielder was left with a tap-in after Marco Reus was challenged by the Kiel goalkeeper and Raphael Guerreiro backheeled the loose ball toward Reyna.

Marco Reus added a third soon after off Emre Can's lobbed pass, and Thorgan Hazard made it four with a solo run through the center and low finish. Bellingham's deflected shot for the fifth goal just before halftime was greeted with more muted celebrations.

Dortmund was already worrying about injuries as striker Erling Haaland watched from the stands with a muscle problem. Worse came when substitute right back Mateu Morey was taken off on a stretcher in the 72nd after a serious knee injury left him screaming in pain.

Kiel pulled off the shock of the competition when it eliminated 2020 winner Bayern Munich in the second round. The club hoped for promotion to the Bundesliga but its season was thrown off course in March when the entire team was put into quarantine after an outbreak of the virus. Another quarantine followed in April, leaving Kiel with fitness problems and a vast backlog of rescheduled games.

Dortmund will play Leipzig in the final in Berlin on May 13 in what will be the last game in charge for both coaches. Dortmund's Edin Terzic is handing over to Marco Rose for next season when his interim spell in charge ends, while Leipzig's Julian Nagelsmann is leaving for Bayern.

Dortmund last reached the final when it beat Eintracht Frankfurt 2-1 for the title in 2017.

Leipzig is seeking the first major trophy in the club's short history. Its only previous appearance in a final was when it lost to Bayern 3-0 in 2019.