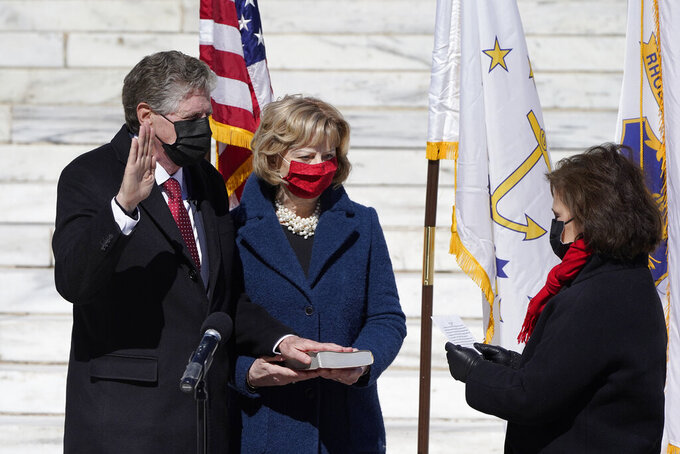 PROVIDENCE, R.I. (AP) — Rhode Island Gov. Daniel McKee vowed to lead the state back to a sense of normalcy in the wake of the COVID-19 pandemic during a ceremonial inauguration held Sunday on the Statehouse steps in Providence.

He pledged that the state will not only recover, but come back stronger.

“Thankfully the vaccines are here and we're getting shots in arms,” McKee said. “We can see the light at the end of the tunnel. There is reason to have hope.”

McKee is serving out the remainder of Raimondo’s four-year term but has said he’ll run for governor outright in 2022. The 69-year-old served as the state’s lieutenant governor and is a former longtime mayor of Cumberland.

McKee thanked Raimondo for her leadership during the pandemic, and also acknowledged the toll that COVID-19 has taken on the state.

“Many have lost their jobs or lost a business that they have built for decades. So many have lost friends and family members to this virus. This past year has been hard on all of us,” McKee said.

“We must also remember the heroism and the resolve that Rhode Islanders have shown in our hospitals, nursing homes, classrooms, our public safety organizations, local shops and our own living rooms each day and each night,” he added.

Only members of the public who received an invitation were able to sit in the socially-distanced seating area. They were also required to undergo COVID-19 screenings and wear masks.