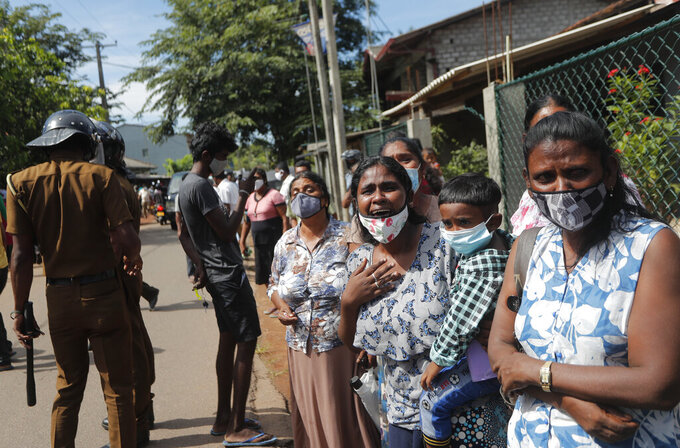 Family members of the inmates of Sri Lanka's Mahara prison complex gather demanding to know the present condition of their relatives following an overnight unrest in Mahara, on the outskirts of Colombo, Sri Lanka, Monday, Nov. 30, 2020. Sri Lankan officials say six inmates were killed and 35 others were injured when guards opened fire to control a riot at a prison on the outskirts of the capital. Two guards were critically injured. Pandemic-related unrest has been growing in Sri Lanka's overcrowded prisons. (AP Photo/Eranga Jayawardena)

COLOMBO, Sri Lanka (AP) — An international human rights group has asked Sri Lanka to conduct an impartial investigation into prison unrest and the use of live ammunition by guards that resulted in the death of 11 inmates and injuries to more than 100 others.

Amnesty International said authorities should examine the underlying causes of the unrest at Mahara prison, which began Sunday evening and continued into Monday.

Three inmates died in hospitals on Tuesday, bringing the death toll to 11.

“Yesterday’s incident reflects the anxiety among prisoners about the threat of COVID-19 within severely overcrowded prisons and the inadequate measures in place to protect them," said David Griffiths, director of the Office of the Secretary General at Amnesty International.

"There is already a swelling number of inmates across the country who have tested positive for COVID-19," he said in a statement.

Pandemic-related unrest has been growing in Sri Lanka’s overcrowded prisons. Inmates have staged protests in recent weeks at several prisons as the number of coronavirus cases surges in the facilities.

Police said the unrest at Mahara prison in Western Province turned into a riot when the inmates allegedly tried to take control of the prison and many tried to escape. Prison offices and property were damaged in the melee, police said.

An inmate was killed in similar unrest at another prison last week. Two died in March.

More than 1,000 inmates at five prisons have tested positive for the coronavirus and at least two have died. About 50 prison guards have also tested positive.

Sri Lankan prisons are highly congested with more than 32,000 inmates crowded into facilities with a capacity of 11,000.

Amnesty International also asked authorities to consider alternatives to custody, such as parole or early release, especially of detainees who do not pose a significant threat to the public, in order to ease the congestion. It also asked that prisoners be provided the same standard of healthcare that is available in the community, including prevention, testing and treatment for COVID-19.

Prisons Minister Sudarshini Fernandopulle told Parliament on Monday that every measure had been taken to prevent infections in prisons, and that isolation and treatment began as soon as coronavirus cases were found inside the facilities.

“There was an escape attempt at Mahara prison and the guards were able to stop them by firing shots," she said.

She said she suspected an “invisible hand” was behind the recent protests at prisons.

“This needs to be investigated through an independent committee because we too are interested in knowing who is behind this," she said.

Sri Lanka is in the midst of a surge in coronavirus infections with 23,987 confirmed cases, including 118 deaths. Only 13 deaths were reported between March, when the first case was detected in the country, and October.