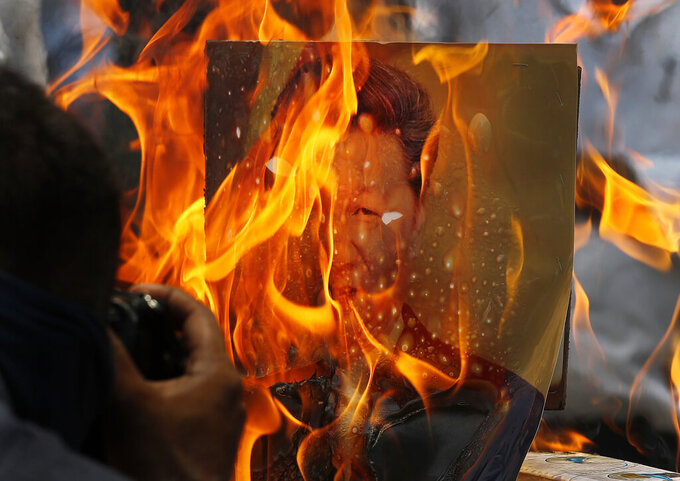 FILE- Indian traders reacting to the killing of Indian troops in a clash with Chinese soldiers in eastern Ladakh burn Chinese products and a poster president Xi Jinping during a protest in New Delhi, India, June 22, 2020. India will stay away from the opening and closing ceremonies of the Beijing Winter Olympics with an Indian official accusing China of politicizing the event. India objected to China using a soldier involved in fighting with Indian forces in Eastern Ladakh as a torchbearer for the Olympics ceremony. (AP Photo/Manish Swarup, File)

NEW DELHI (AP) — India will not attend Friday's opening ceremony of the Beijing Winter Olympics, after one of the torchbearers reportedly chosen by Chinese authorities riled up New Delhi's anger.

India's foreign affairs spokesman Arindam Bagchi on Thursday said it was “regrettable that the Chinese side has chosen to politicize an event like the Olympics.”

The move followed reports in China's state-owned Global Times that a Chinese military commander, who was involved in deadly clashes with Indian border forces in 2020, had been chosen as one of many torchbearers charged with relaying the Olympics flame to Beijing.

The spokesman added that the Indian Embassy in Beijing would also not send a representative to the closing ceremonies.

The U.S., along with several countries including Australia, Britain and Canada, have announced a diplomatic boycott of the Winter Olympics, citing China’s human rights violations, while allowing their athletes to compete.

India has one athlete who's qualified to compete at the Games, according to spokesman Bagchi.