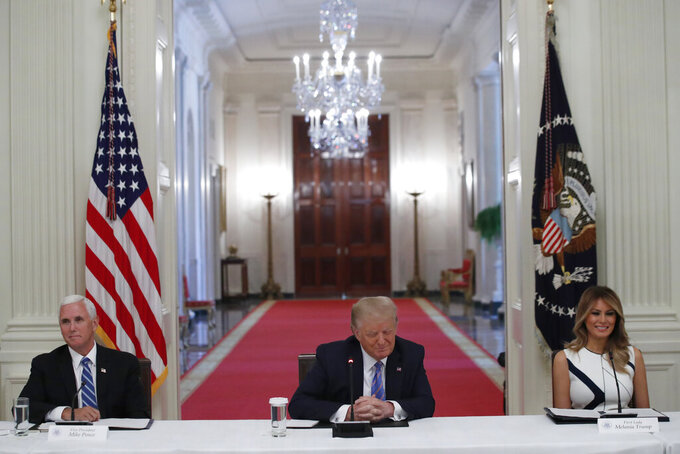 NEW YORK (AP) — President Donald Trump is wielding America's racial tensions as a reelection weapon, fiercely denouncing the racial justice movement on a near-daily basis with language stoking white resentment and aiming to drive his supporters to the polls.

The incendiary discourse is alarming many in his own party and running contrary to the advice of some in his inner circle, who believe it risks alienating independent and suburban voters. It's a pattern that harks back to cultural divisions Trump similarly exploited in his victorious 2016 campaign.

“It’s not about who is the object of the derision or the vitriol. The actual issue is understanding the appeal to white resentment and white fear,” said Eddie Glaude, chair of the Department of African American studies at Princeton University. “It’s all rooted in this panic about the place of white people in this new America.”

Though Trump has long aired racially divisive language and grievances in the public sphere, his willingness to do so from behind the presidential seal — and on his Twitter account — has reached a breakneck pace in recent days as the nation grapples with racial injustice.

The president tweeted — and later deleted — a video of a supporter yelling “white power." He referred to the Black Lives Matter mantra as a “symbol of hate.” He took a swipe at NASCAR for removing the Confederate flag from its races and falsely suggested a Black driver had carried out a racially charged hoax. He mused about overturning a suburban fair-housing regulation and spoke approvingly of the current branding of the Washington Redskins and Cleveland Indians, team nicknames that many consider offensive to Native Americans.

Most notably, he has engaged in a full-throated defense of the Confederate legacy, which he at times has cloaked within tributes to the Founding Fathers, including during a pair of high-profile Fourth of July weekend speeches.

“Those who seek to erase our heritage want Americans to forget our pride and our great dignity, so that we can no longer understand ourselves or America’s destiny,” Trump said Friday at the base of Mount Rushmore. “In toppling the heroes of 1776, they seek to dissolve the bonds of love and loyalty that we feel for our country, and that we feel for each other. Their goal is not a better America; their goal is the end of America.”

In defending Thomas Jefferson and George Washington that night, Trump did not mention the Confederacy. Instead, he painted racial justice demonstrators with a broad brush that made no distinction between the many who oppose honoring the Confederacy and the relative few who question celebrating Founders who owned slaves.

But Trump has repeatedly called for the preservation of statues of the Confederacy and the names of its generals on military bases — all assailed in the protests that have swept from coast to coast in the aftermath of the death of George Floyd.

His comments are an apparent descendant, a half-century later, of Richard Nixon’s coded outreach to white voters known as the Southern Strategy. Trump himself has embraced Nixon’s phrase “the Silent Majority” to describe his own supporters.

By all accounts, the president’s actions are, at times, born of impulse and an instinctive reaction to what he sees on television. However, according to current and former Trump campaign officials, his overarching strategy is an appeal to white voters — some of them racist and some who fear being left behind by a government seemingly consumed with helping others. Those officials were not authorized to publicly discuss such private matters and commented only on condition of anonymity.

The belief is that his appeals will generate enthusiasm among the same disaffected white voters who made up the president’s base of supporters four years ago.

White House advisers Kellyanne Conway and Jared Kushner, according to the officials, have both warned that some of the racist rhetoric, including the use of China-blaming “kung flu” to describe the COVID-19 pandemic, could turn off swaths of voters. And some believe there was more of an audience for inflammatory rhetoric about immigration four years ago, particularly as polls show the Black Lives Matter movement gaining widespread support.

“The 2016 debate about immigration was about the future of sovereignty, the American worker, and our culture. The issues that involve race now are completely different,” said Sam Nunberg, a former Trump campaign adviser.

“It’s not easy to conflate people who want to tear down the statues of the Confederacy and the few who want to get George Washington,” said Nunberg. “I don’t think it’s a winning argument in a time of a pandemic. This doesn’t affect people’s daily lives. This is a dumb issue to fight.”

Four months before Election Day, Republicans are nervously watching polls that show Trump slipping behind his Democratic rival Joe Biden. They have grown increasingly worried that his focus on racial rancor could force GOP senators locked in tough campaigns to distance themselves from their party's president.

“Defending the Confederacy and racial dog whistles is not going to help win the suburbs. He is solely focused on a small part of his base when he should be looking to grow his support,” said Alex Conant, a Republican strategist who advised Sen. Marco Rubio's presidential bid. “If Joe Biden proposed tearing down Mount Rushmore, that would be a huge opening for Trump. But Biden is not doing that."

“President Trump’s Mount Rushmore address was a defining speech highlighting America’s highest ideals of freedom and individual liberty,” said campaign spokesman Ken Farnaso. “He both educated citizens on our shared history and pushed for a more united front combating those who want to create chaos.”

Democrats have charged that the president's recent rhetoric is consistent with Trump’s history, including his call in the 1980s for the death penalty for Black teenagers later exonerated for the rape of a jogger in Central Park and for questioning whether the nation’s first Black president, Barack Obama, was born in the United States.

“We are beyond dog whistles with this president,” said TJ Ducklo, the Biden campaign's national press secretary. “Donald Trump openly embraces racist rhetoric and sends blatant signals of support for the causes of white supremacists -- and he does it from the highest office in the land.”