Risky driving: US traffic deaths up despite virus lockdowns 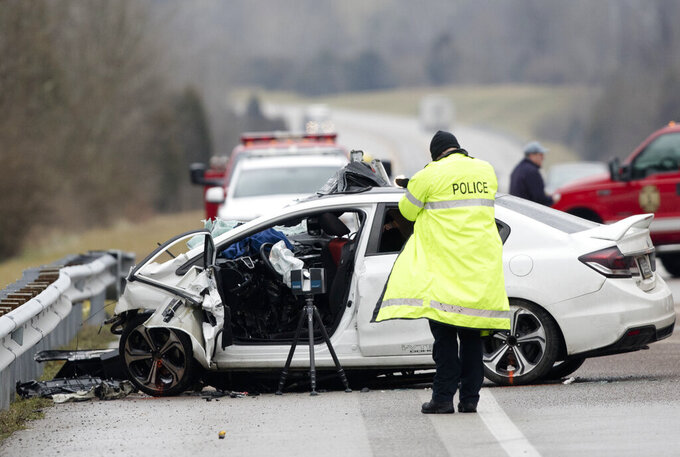 FILE - In this Saturday, Jan. 25, 2020, file photo, emergency crews work the scene of a fatal crash involving a charter bus and car on the AA highway in Campbell County, Ky. The driver of the vehicle died. The number of people killed on the nation’s highways rose 4.6% in the first nine months of 2020, despite coronavirus lockdowns that curtailed driving early in the year. (Albert Cesare/The Cincinnati Enquirer via AP, File)

DETROIT (AP) — The number of people killed on the nation's highways rose 4.6% in the first nine months of 2020 despite coronavirus lockdowns that curtailed driving early in the year.

The National Highway Traffic Safety Administration estimates that 28,190 people died in traffic crashes from January through September of last year, up from 26,941 in the same period of 2019. Final statistics for the full year won't come out until fall.

Authorities blamed the increase on risky driving behavior that developed when there were few vehicles on the road early in the pandemic.

“Preliminary data tells us that during the national health emergency, fewer Americans drove, but those who did took more risks and had more fatal crashes,” the safety agency said in a letter addressed to the nation's drivers.

Traffic deaths rose 0.6% during the first-quarter of 2020, but they fell 1.1% in the second quarter as coronavirus lockdowns restricted movement. Fatalities spiked 13.1% from July through September, the agency said.

“A big factor here is the lack of enforcement. We are hearing from many states that traffic stops have declined during COVID-19. Drivers feel like they can speed and get away with it,” he said.

NHTSA said recent reports show a 22% increase in vehicle speeds in several metropolitan areas over pre-pandemic numbers. Also, a study found that 65% of drivers treated at trauma centers who were hurt in serious crashes had drugs or alcohol in their systems last year. It was 50.6% before the pandemic, NHTSA said. The agency also said fewer people are wearing seat belts.

The agency is telling people not to drive under the influence of drugs or alcohol, to wear seat belts and to reduce their speeds in order to stay safe. It also says people should make sure their children are in the proper car seat for their size.