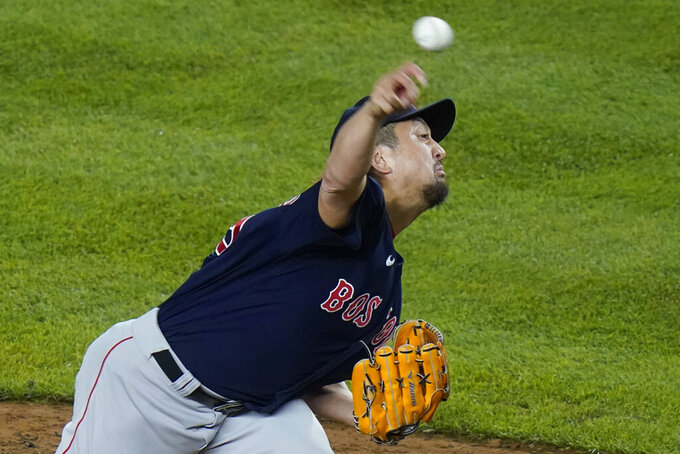 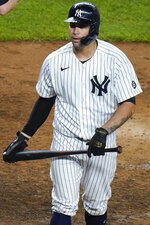 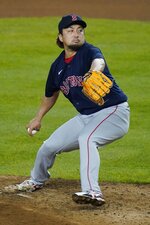 NEW YORK (AP) — With the Yankees on the way to yet another loss, this time to the rival Red Sox, even the public-address system gave up early.

The strains of Frank Sinatra’s rendition of “New York, New York” sounded throughout Yankee Stadium when Gary Sánchez tipped a 1-2 pitch with two outs in the ninth inning on Friday night. Ol’ Blue Eyes was only slightly premature.

Sánchez fouled two more pitches, then swung over Matt Barnes' knuckle-curve in the dirt, the Yankees' 15th strikeout in a 5-2 victory by Boston that stopped an 11-game losing streak in the Bronx.

On the night the Red Sox-Yankees rivalry renewed for the first of 19 meetings this year, Rafael Devers hit a three-run homer into the right field second deck in the first inning on an 0-2 fastball from Michael King (0-3), giving Devers 15 homers and 46 RBIs this season.

“We haven't had that much success since 2019 against this club here,” Devers said though a translator, “so it's extremely important to be able to get these wins.”

Marwin González added a two-run double in the sixth off Lucas Luetge. Both big hits were with two outs.

Former Yankee Nathan Eovaldi (7-2) won his third straight start, taking a shutout in the sixth before tiring, and allowing two runs — one earned — and eight hits in six innings. Boston won at Yankee Stadium for the first time since June 2, 2019.

“With our struggles that we had last year, it's kind of not a surprise to me now,” Eovaldi said. “But it's a new year. We come in, we've got a chip on our shoulders.”

New York lost for the eighth time in 11 games. This one took 2 hours, 49 minutes, not the typical 4-hour Yankees-Red Sox battle.

“At one point I was like, are these guys, are they going to break the guidelines today? Are they going to go out in the city or something? Because we were swinging,” Red Sox manager Alex Cora said. "For us to be able to play this game and win it and be a short one, that's a first for me."

After going their first 57 games without facing the Red Sox, the Yankees started a stretch of 14 games against Boston in their next 43. New York and Boston had not met for the first time this late in a full season since 1996, when their first game was July 1.

A season-high sellout crowd of 18,040, boosted by an easing of coronavirus restrictions, booed as the Yankees grounded into a pair of double plays that raised their major league-leading total to 54.

Yankees hitters had double-digits strikeouts for the sixth time in eight games and 29th time this season. Eight of New York's last nine outs were whiffs.

Xander Bogaerts scored twice for second-place Boston and had four hits in five at-bats after an 0-for-24 slide.

Hirokazu Sawamura struck out five around a walk over two innings, and Barnes struck out the side for his 13th in 14 chances.

Judge hit his 14th homer in the sixth, a drive into the right-field short porch, and the Yankees got an unearned run when Odor’s two-out, two-on grounder clipped off González’s glove and ricocheted off a cheekbone, and the first baseman picked up the ball and threw wildly past first for an error. Frazier hit an inning-ending flyout.

King struck out Hunter Renfroe, González and Christian Vázquez on nine pitches in the fourth inning, becoming the seventh Yankees pitcher to strike out the side consecutively with the minimum pitches.

King followed in the fifth with his second four-pitch inning this season.

Dustin Pedroia will be honored during pregame ceremonies before the June 25 game against the Yankees. Peoria, 37, won three World Series titles for the Red Sox from 2007-19 and retired Feb. 1, never completely recovering from knee damage sustained during a Manny Machado slide in 2017.

Red Sox: RHP Ryan Brasier (left calf strain) was hit on his right side of his head by a line drive during simulated game at Fort Myers, Florida, manager Alex Cora said after exchanging texts with the pitcher. Brasier was taken to a hospital for be checked for a concussion. Brasier was stable and was going to be observed until at least Saturday.