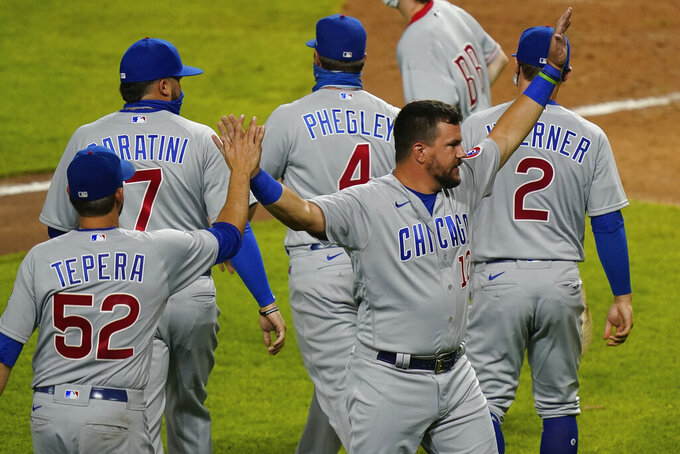 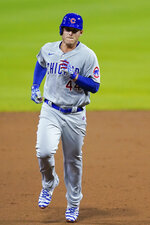 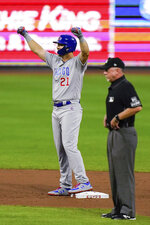 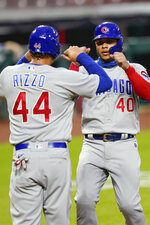 CINCINNATI (AP) — Manager David Ross was starting to relax with a seven-run lead. Didn't take long for him to remember from his playing days that Great American Ball Park can erase most anything.

Anthony Rizzo homered for the third time as Chicago built a seven-run lead, and the Cubs let most of it slip away before Jeremy Jeffress closed out an 8-7 victory over a Cincinnati Reds team coping with coronavirus uncertainty.

Then, Ross could exhale.

“I played here in Cincinnati and understand how quickly things can turn around,” the first-year manager said. “The other team never feels out of the game. This field makes you feel a homer is just around the corner.”

Down 8-1 in the seventh inning, the Reds cut it to 8-5 on Joey Votto’s two-run single. Craig Kimbrel walked the bases loaded with one out in the ninth, and then hit Freddy Galvis and walked Tyler Stephenson to cut it to 8-7.

Ross decided to bring in Jeffress, who fanned Phillip Ervin and retired Votto on a liner to center for his first save with the Cubs.

“What baseball's all about,” Jeffress said.

Rizzo scored three times as the Cubs won for the third time in four games. The Reds dropped to 1-3, an especially disappointing start after their $165 million offseason makeover.

The Cubs arrived at a ballpark that had a brush with COVID-19. Reds infielder Matt Davidson went on the injured list Saturday after testing positive for the coronavirus, and teammates Mike Moustakas and Nick Senzel were sick a day later. The Reds were awaiting further results Monday.

The Cubs were aware of how the virus has spread through the Marlins, with three games postponed as a result.

“It’s a little bit scary, but like I said, man, you just have to try to trust in this process and trust in the protocols we have in place,” said Jon Lester, who threw five hitless innings.

Ian Happ, the Cubs’ union representative, said players were pleased with precautions in place when they arrived at Great American, putting them at ease.

They were on the dugout railing cheering as eight Cubs went to the plate in the first inning of Wade Miley’s first start for the Reds, who signed him to a two-year deal so they would have a left-hander in the rotation.

It went badly right away.

“He struggled, but he’s been through it before," Reds manager David Bell said. “He’s going to bounce back.”

Miley hit Kris Bryant with his second pitch, walked Rizzo, and gave up Willson Contreras' double. Steven Souza Jr. doubled home two more in his Cubs debut, and David Bote's single made it 4-0 after only 28 pitches.

Javier Báez doubled home another run in the second, and Miley left after retiring only five of the 13 batters he faced. Rizzo hit a solo homer in the sixth off Tejay Antone.

Lester (1-0) handed a 6-0 lead over to the Cubs' bullpen, having thrown 76 pitches on a muggy night. Jesse Winker got the Reds' first hit an inning later, an RBI single off Rowan Wick.

Stephenson homered in his first major league plate appearance, the third in Reds history to do so and the first since Ted Tappe on Sept. 14, 1950, at Brooklyn.

“I can’t explain it," Stephenson said. “He missed with a curveball. I was looking for a fastball over the plate. I don’t know what happened. I said to myself, ‘I don’t want to miss it.’”

The start of the game was delayed an hour and 47 minutes as a storm moved through.

Cubs: Bryant, Rizzo, Contreras and Albert Almora Jr. were hit by pitches — Rizzo twice — but stayed in the game.

Reds: Right-hander Anthony DeSclafani felt no problems after throwing off a mound, leaving him in line to make his next scheduled start. His first turn through the rotation was skipped because of soreness in his side.

Cubs: Alec Mills makes his third career start against the Reds. He got his first career victory against Cincinnati at Sept. 16.

Reds: Tyler Mahle starts in place of DeSclafani. Mahle is 2-1 in five career starts against the Cubs with a 4.93 ERA.