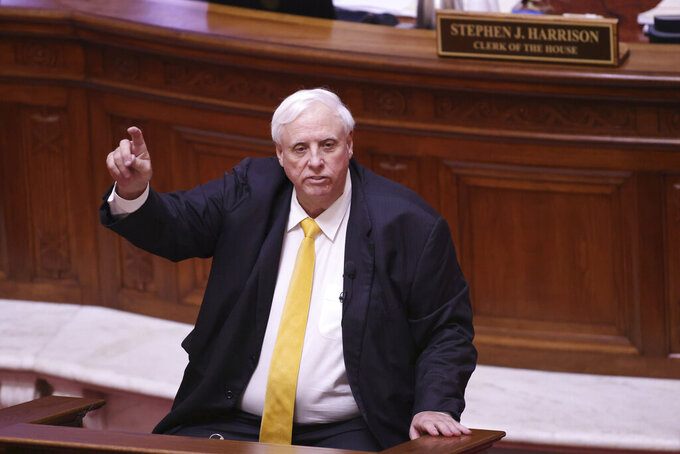 FILE - West Virginia Gov. Jim Justice speaks during the State of the State Address in the House Chambers of the West Virginia State Capitol Building in Charleston, W.Va., on Wednesday, Feb. 10, 2021. Justice has agreed to live in the seat of state government in Charleston, ending a long-running challenge over his residency. A Kanawha County judge signed an order Monday, March 1, 2021, dismissing a 2018 lawsuit filed by a former state lawmaker. (AP Photo/Chris Jackson, file)

CHARLESTON, W.Va. (AP) — West Virginia business groups are opposing key parts of Republican Gov. Jim Justice's proposal to cut the personal income tax because it includes other tax hikes. On top of those concerns, Republicans are worried that the federal stimulus package stymies their ability to enact tax reform this year.

The roadblocks come as the legislature has less than a month before its annual 60-day session concludes on April 10. Republicans control a supermajority in both chambers and have made reforming the income tax — which makes up more half of the state's budget — a top priority.

But industry groups are not on board, arguing Justice's current plan shifts the tax burden from individuals to their companies and mom-and-pop shops. Namely, they are lobbying against a provision to offset a 60% cut to the income tax with raising the sales tax to 7.9%, which would be the highest among states.

There are a bevy of other tax increases to offset the cut, including taxing luxury items that cost at least $5,000 and increases to taxes on soft drinks, cigarettes, barrels of beer and other alcohol, and fossil fuel production.

The West Virginia Chamber of Commerce said “many of the tax rates proposed in this legislation would become the highest in the country,” even as it “applauds the desire” to reform the income tax.

“Lower, flatter taxes have always been a highlighted goal of the West Virginia Chamber,” the group said in a letter this month.

Justice, a billionaire businessman who claims cutting the income tax brings “sex appeal,” slammed the group this week: “Just think about where the Chamber of Commerce has led West Virginia over the last 50 years? They've led us to dead last, dead last, dead last.”

He said small businesses across the rural state will stand to benefit from residents with lower taxes having more spending power.

Meanwhile, Justice and Attorney General Patrick Morrisey are railing against a provision in the $1.9 trillion federal stimulus package that bars relief funds from being used to directly or indirectly offset a tax cut. Justice applauded Congress for approving a massive spending package but has recently slammed the state's Democratic U.S. Sen. Joe Manchin for supporting the tax provision.

Manchin's office didn't respond to an email seeking comment. He has criticized Justice for not using more of the first round of aid for states on direct pandemic-related spending.

Morrisey and 20 other Republican attorneys general sought clarity from Treasury Secretary Janet Yellen on Tuesday about the tax provision. They wrote in a letter that the prohibition is “unclear, but potentially breathtaking” — airing concerns that any tax cut could be construed as taking advantage of the pandemic relief funds.

The Treasury Department said in a statement to The Associated Press that states can cut taxes as long as the pandemic relief funds are not used to replace any of the lost revenue.

“In other words, states are free to make policy decisions to cut taxes — they just cannot use the pandemic relief funds to pay for those tax cuts,” the department said.

The letter by Morrisey and the states wants an assurance from the Treasury Department in writing by Tuesday. He said at a press conference Wednesday afternoon that he was prepared to sue over the matter.

“The feds could argue that because we went in and did something that had indirect relationship to COVID money ... they could come back and claw back funds from the state,” said Republican state Sen. Eric Tarr, who chairs the Finance Committee. “This is a direct assault on personal income tax.”

The Republican president of the state senate, Craig Blair, said the legislature is still driving ahead with the income tax proposal.

“Don't think for a minute that it's going to slow down the work that we're doing for the people of West Virginia," Blair said at the press conference. “We're going to keep moving forward as if we've already won.”