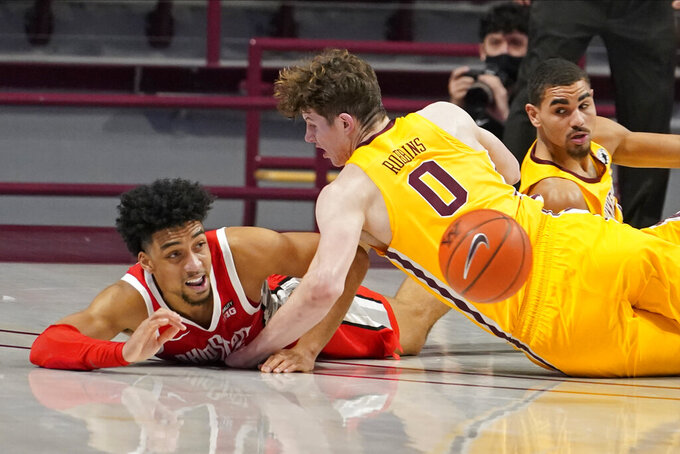 Ohio State's Justice Sueing, left, gets off a pass despite a collision with Minnesota's Liam Robbins in the first half of an NCAA college basketball game Sunday, Jan. 3, 2021, in Minneapolis. (AP Photo/Jim Mone) 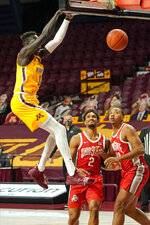 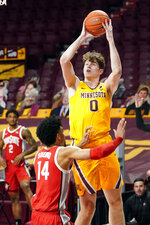 MINNEAPOLIS (AP) — After switching schools during the pandemic lockdown and stepping up to high major competition, Liam Robbins was going to need some time to find his rhythm with Minnesota.

Maybe not that much. The Big Ten's newest big man is sure playing like he belongs in the nation's deepest conference.

Robbins had 27 points, 14 rebounds and five blocks, keeping up his impactful introduction to the Big Ten for No. 21 Minnesota in a 77-60 victory over No. 25 Ohio State on Sunday.

“He’s the anchor back there,” said point guard Marcus Carr, who managed 15 points despite constant double teams that limited him to one made basket in the first half.

Robbins, the 7-footer who transferred from Drake and had his eligibility immediately granted by the NCAA, pitched in four assists and two steals in another display of all-around excellence that has helped give Minnesota (10-2, 2-2) some new life and Carr some more help this season.

“He's embracing the physicality of the game a lot better, and sometimes you just need to be able to see that. You need to feel it first to be able to move in the right direction," coach Richard Pitino said.

Duane Washington Jr. had 21 points on 5-for-7 shooting from 3-point range for the Buckeyes (8-3, 2-3), who blamed themselves for letting Robbins have his way in the post with his 3-inch height advantage on E.J. Liddell.

“Our preparation was to take him out of those spots. We didn’t do that. I didn’t do that, specifically,” said Liddell, who had 10 points.

Ohio State shot just 8 for 32 in the second half while watching a six-point halftime deficit slip further away.

“I think we came into the game thinking it was going to be a little bit easier to run our stuff,” Washington said, adding: “We just didn’t come out with enough fight.”

Gabe Kalscheur scored 13 points, and Both Gach and Jamal Mashburn Jr. each had 10 points for the Gophers, who emerged with three wins from a 10-day, four-game stretch — all against Top 25 foes. They finished their first six possessions with baskets and trailed for a grand total of 18 seconds of game time. Liddell’s putback dunk made it 28-27, but Robbins swiftly answered on the other end with a layup off a high-low pass by Curry.

Robbins has not only been a quick study on defense to avoid the dreaded foul trouble that dogs so many big men in the conference, but his passing ability and shooting range have given the Gophers another dimension. He's catching the ball deep in the post, making scoring that much easier.

“It’s the Big Ten. You’ve got to be physical if you want to get to the basket,” Robbins said.

Playing with energy is critical, too. Robbins stole the ball from Washington to start a fast break and, after Kalscheur missed a pull-up jumper, tipped it to himself for the hustle rebound. He went hard at the basket to bank in a hook shot, draw a foul on Kyle Young and convert a three-point play.

A few minutes later, backup Eric Curry twisted out of the post to poke away a soft pass by Washington for a steal that Mashburn Jr. snagged and turned into a quick-twitch layup in traffic to finish the transition for a 53-43 advantage.

The Gophers posted their third straight victory over Ohio State, their longest streak in the series since winning five in a row from 1996-98, games that were later vacated for NCAA violations. Minnesota’s best win of the pandemic-shortened previous season was an 84-71 victory over the then-third-ranked Buckeyes on Dec. 15, 2019. Carr had 35 points, which is still his career high.

After landing a league-record nine teams in the latest Associated Press poll, the Big Ten might well lose one when the new national rankings are released on Monday. The Buckeyes won their only other game this week at last-place Nebraska.

Ohio State: The Buckeyes had their half-court offense out of sync the entire afternoon, with the Gophers consistently getting hands in passing lanes and refusing to allow the easy shots. Senior guard C.J. Walker has been playing through a thumb injury, and it has showed. He has 14 points on 4-for-25 shooting over the last four games.

Minnesota: The key to sustaining this success for the Gophers will be to keep diversifying beyond Carr, the preseason All-Big Ten pick. In the last game, a 71-59 loss at No. 6 Wisconsin, that didn't happen as Carr went 3 for 13 from the floor.

“He’s not one who’s just going to try and get his," Robbins said. "He’s going to make sure we win.”