Rockets set to go into opener with 9 available players 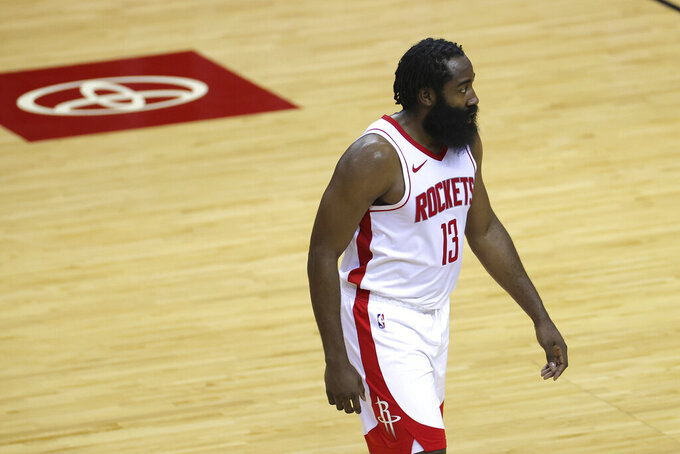 Houston Rockets' James Harden looks on during the second half of an NBA basketball game against tha San Antonio Spurs in Houston, Thursday, Dec. 17, 2020. (Carmen Mandato/Pool Photo via AP) 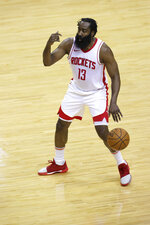 The Houston Rockets are preparing to have only nine available players, James Harden among them, for their first two games of the season because of ongoing quarantine issues related to the coronavirus pandemic.

The Rockets play their opener in Portland on Saturday and visit Denver on Monday. They will be without John Wall, DeMarcus Cousins, Eric Gordon and Mason Jones for those games, all listed as out by the Rockets with “health and safety protocols” as the reason.

Those four players, if they return negative tests, will see seven-day quarantines end Wednesday. That means they would be cleared to return when Houston plays at home against Sacramento this coming Thursday.

Harden, the three-time defending NBA scoring champion who has been prominently mentioned in trade talks in recent weeks, is not on the team’s injury report. The NBA said earlier in the week that Harden would serve a four-day quarantine, which ended Friday, for violating the league’s virus protocols. He was also fined $50,000 for attending an event that the league said broke the rule prohibiting players from “attending indoor social gatherings of 15 or more people or entering bars, lounges, clubs or similar establishments.”

That rule is part of the long list of protocols put into place for this season. Harden being ineligible to play meant the Rockets did not have the eight available players needed to start a game, so what was to have been their opener on Wednesday against Oklahoma City was postponed.

Ben McLemore and Kenyon Martin Jr. are not with the Rockets on the trip and are self-isolating, the team said. Chris Clemons has also been lost for the season because of an Achilles injury suffered in the preseason.

The league announced Thursday that of the 558 players tested for COVID-19 in the week starting Dec. 16, there were two new confirmed player positive tests. The league has not revealed the names of any of the players who have returned the 59 positive tests since the week before training camps started; 48 of those positive tests came back in the week prior to camps opening.

Houston has 16 players on its current roster. Between the four players in quarantine, two self-isolating and one hurt, that leaves nine eligible to play at this time — one more than the NBA minimum.

The quarantine situation further delays the long-awaited returns for Wall and Cousins.

Saturday marked two full years since Wall last officially played; he appeared for Washington on Dec. 26, 2018 and hasn't been in a game that counted since because of Achilles and heel surgeries, though he did appear in Houston's preseason games. Cousins hasn't played since appearing with Golden State in the NBA Finals on June 13, 2019; he missed last season after knee surgery.