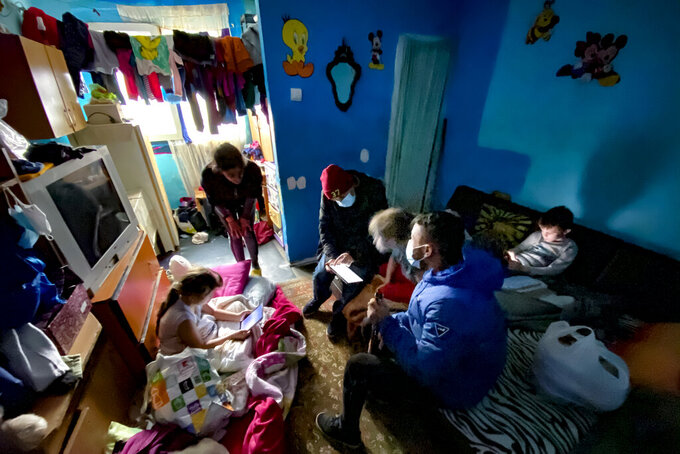 Valeriu Nicolae, center background, a Romanian Roma human rights activist, who runs as an independent in the upcoming parliamentary elections, sets up a tablet for online schooling for children of a family in a poor area of Bucharest, Romania, Wednesday, Dec. 2, 2020. Romania will hold parliamentary elections on Sunday Dec. 6. (AP Photo/Vadim Ghirda)

BUCHAREST, Romania (AP) — Romanians will vote Sunday in a legislative election expected to restore some measure of stability in a country with one of the European Union's highest emigration rates, and bring to power a generation that came of age in a time of national turmoil and strongly identifies as European.

Cabinet shakeups and no-confidence votes have given Romania five prime ministers in as many years. According to most pre-election polls, the weekend vote is likely to favor reform-oriented politicians united in their resolve to keep Romania in step with the EU mainstream and away from the camp of other post-communist nations, such as Hungary and Poland, with their populist, euroskeptic leaders.

The center-right National Liberal Party, known by its Romanian acronym PNL, appears set to become the top vote-getter. But the mainstay party of Romania's EU-aligned, austerity-prone social conservatives is expected to fall far short of a parliamentary majority.

Its main rival, the left-leaning, populist Social Democratic Party, or PSD in Romanian, won the last election in 2016 and ran through three prime ministers before PNL first took the reins of a minority government a year ago. The PSD-led government had drawn heavy criticism from the EU for its interference with the judiciary and a cascade of corruption scandals involving some of its most prominent members.

The Social Democrats' chaotic tenure triggered two years of massive street protests that gave voice to a new generation of relatively young, foreign-educated and proudly European politicians who point to widespread graft and fraud in Romanian government ministries and state institutions. Some of them now are running for seats in parliament.

“There are many state institutions under political control which function really badly, and the problems there need to be exposed,” said Valeriu Nicolae, a human rights activist who is running as an independent candidate. “MPs never tackled these issues because everyone has an interest in these state institutions. They either have relatives working there, friends or party members, and it’s not nice to expose your friends.”

Nicolae is an initiator of the RESPECT anti-racism campaign in football, launched at the 2010 World Cup in South Africa, one of the most visible campaigns of this sort in the world, and says that in the past he was “treated horribly (for) being Roma” in Romania.

He said he decided to run after witnessing what he considered to be a weak effort to prevent “a man accused of horrible things and a very dubious person” winning a district mayor's election in the capital, Bucharest. In one week, Nicolae collected 13,000 qualifying signatures, 3,500 more than he needed to get on Sunday's ballot.

“I am convinced that (change) is possible,” he said. “I am not bound by an interest to protect my political career. My life quality will suffer if I get into parliament.”

A more organized new force is USR-PLUS, a mix of pro-EU technocrats and social-justice and anti-corruption activists that coalesced last year into a progressive political alliance. Polls predict the alliance, whose members hold divergent views on many cultural issues, will get around 20% of Sunday’s vote for both chambers of parliament.

That's the same share forecast for the PSD, which has dominated Romanian politics since the fall of communism in 1989.

The alliance has targeted young and disillusioned voters, including with pledges to depoliticize and fully reform Romania's civil service and eradicate corruption. It has also promised to eliminate income tax for minimum-wage workers and create well-paying jobs to lure back young, highly educated Romanians who have been leaving in droves since the country joined the EU in 2007.

“It’s good to see a new generation of leaders who understand the needs of our society and are professionally and personally fit to meet them,” said Dacian Ciolos, who represents Romania in the European Parliament and is one of the progressive alliance’s top leaders. “It puts pressure on us, as a new political entity, because we have to meet higher expectations.”

The alliance has pledged not to be part of a parliamentary majority that would include the PSD, which has accused prominent USR-PLUS members of being part of a dark anti-Romanian conspiracy linked to Hungarian-American philanthropist George Soros, a favorite bogeyman of Central European populists. At the same time, USR-PLUS has indicated it has no intention of playing second fiddle to the PNL in a future coalition government.

Some analysts predict the USR-PLUS alliance will try to assert itself in a future governing coalition by demanding a reconfiguration of the government and the prime minister's job for Ciolos, 51. He served a stint at the helm of Romania’s first, short-lived technocratic government several years ago.

It would be a bitter pill for the PNL, but one it might be forced to swallow if it wants to preserve its image as a party driven by a genuine desire to rid Romania of a corruptive welfare state model, which it blames on PSD's decades-long dominance. Most analysts think the conservative PNL and the progressive alliance will find a compromise.

“It’s in their best interest to govern together despite their (ideological and economic) differences which are incomprehensible to most of their supporters,” political analyst Andrei Taranu said.

Romania was plagued by widespread poverty before the coronavirus pandemic, with over 25% of the population of 19 million living on less than $5.50 a day. The pandemic has exacerbated structural problems, including the near collapse of the public health care system.

To date, the EU's seventh-most populous country has confirmed over a half-million virus cases and more than 12,000 deaths. As a result of the pandemic and virus containment measures, Romania’s fiscal deficit is expected to widen this year to around 9% of gross domestic product, compared with 4.3% in 2019.

Nicolae, who himself grew up in poverty, has dedicated his life to helping vulnerable children escape a life of misery and drug-abuse, and giving them access to education.

“Although I say all the time ‘I’m a gypsy I’m a gypsy,’ people no longer register me like that” he said. ”That I, a Romanian Roma, ran as an independent and I managed to gather the necessary signatures, is a very good signal. And if I win, it would be a great signal."

Some 18 million people are registered to vote on Sunday at 18,000 polling stations across the country. In a reflection of the importance of the Romanian diaspora living and working abroad, there are also 748 polling stations in other countries, almost twice as many as there were four years ago. Voters will be filling 136 seats in the Senate and 329 in the Chamber of Deputies.

No special virus precautions have been put in place beyond the general requirements to wear masks, sanitize hands and maintain social distancing.