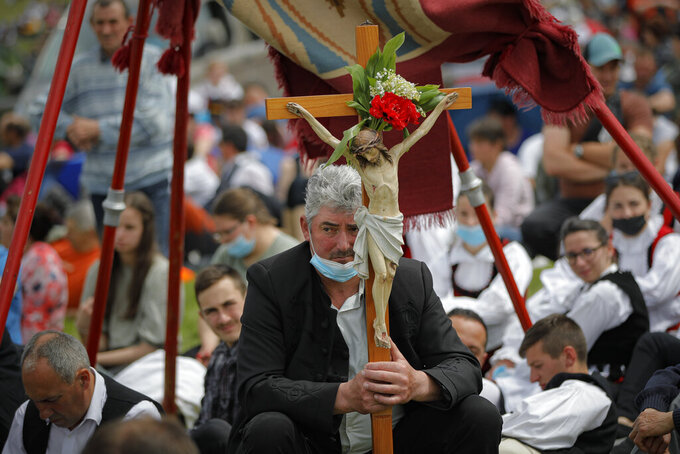 A man holds a crucifix as Catholic pilgrims fill the hillsides after tens of thousands joined their faith's biggest religious event in Sumuleu Ciuc, Romania, Saturday, May 22, 2021. More than 35,000 Catholic pilgrims congregated at an open-air shrine in Sumuleu Ciuc in Transylvania on Saturday for an age-old procession that last year was canceled due to the coronavirus pandemic. (AP Photo/Vadim Ghirda)

MIERCUREA CIUC, Romania (AP) — More than 35,000 Roman Catholic pilgrims congregated Saturday at an open-air shrine in Romania for a centuries-old procession that was canceled last year due to the coronavirus pandemic.

The service in Sumuleu Ciuc, located in Romania's Transylvania region, is dedicated to the Virgin Mary and dates back more than 450 years. Participants were urged to observe a number of coronavirus-control measures, including wearing masks.

But for the tens of thousands of Catholics in the overwhelmingly Christian Orthodox country who attended in droves, resuming their faith’s biggest national event was a welcome step towards normality.

“After a difficult period, we can celebrate together again this year!” Csaba Borboly, council president in the predominantly ethnic Hungarian Harghita County, wrote online.

Many pilgrims wore traditional ethnic clothing, some arrived on horseback, and some traveled long distances by foot to a hilltop shrine dedicated to the Virgin Mary. Shortly after midday, Bishop Laszlo Kerekes of Tharros celebrated Mass with the sea of worshipers.

The event organizers also saw the massive religious gathering — which in recent years also attracted thousands of foreign pilgrims, — as an opportunity to tackle the ongoing coronavirus pandemic.

A no-appointment-needed “vaccination marathon” was set up near the Franciscan Church for those wishing to receive a vaccine against COVID-19.

“We wanted to create a vaccination opportunity to put an end to the pandemic for good,” Tar Gyöngyi, executive manager of the Health Directorate in Harghita County, told The Associated Press.

“This pandemic is like a dragon. Until we cut off all of its heads, it will not go away,” he said.

Among the people who rolled up their sleeves for a shot was an influential Franciscan monk, Csaba Böjte. He runs a foundation for homeless orphans, and last year he suffered from a severe case of COVID-19.

“I was in the hospital,” said Böjte, who received his vaccine after Mass. “I have buried quite a few people who died of this disease. I trust our doctors and I hope this will benefit my health and I hope we can defeat this pandemic."

The Catholic service dates back to 1567, when John Sigismund Zapolya, the first prince of Transylvania, tried to convert local Catholics to the Unitarian faith. The Catholics fought back and won, returned to Sumuleu Ciuc each year on the first Saturday before Pentecost to honor the Virgin Mary.

Romania’s ethnic Hungarian population numbers around 1.2 million and mostly is based in the Transylvania region, which before the end of World War I was part of the Austro-Hungarian Empire.