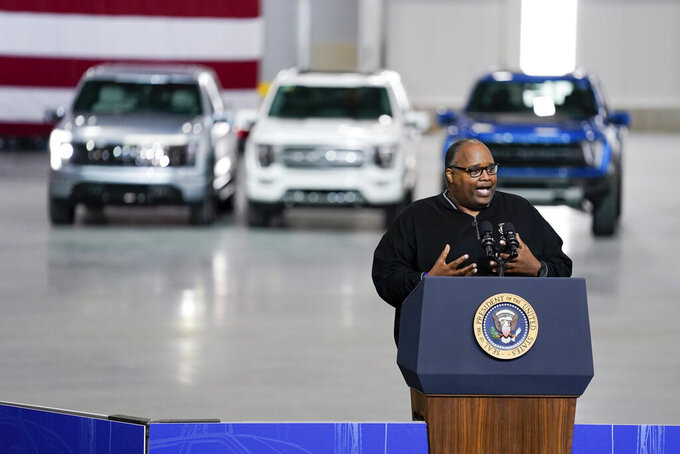 FILE - In this May 18, 2021 file photo, Rory Gamble, President of United Auto Workers, speaks at the Ford Rouge EV Center in Dearborn, Mich. Gamble, who led the union through a corruption scandal and the coronavirus pandemic, is retiring effective June 30. (AP Photo/Evan Vucci, File)

DETROIT (AP) — Rory Gamble, a former Ford Motor Co. factory worker who led the United Auto Workers through one of the most turbulent periods in its history, is retiring effective June 30 after nearly a half-century of union membership.

Brian Rothenberg, spokesman for the UAW, confirmed the news.

The union’s Executive Board began discussing Gamble’s replacement at a meeting Friday, but it wasn’t clear when a decision would be made, Rothenberg said.

Secretary-Treasurer Ray Curry is expected to be among the names under discussion.

Gamble, 65, became acting president in November of 2019 just after a contentious 40-day strike against General Motors, and in the middle of a wide-ranging federal probe of bribery and embezzlement by top union officials.

A few months after he was appointed president that December, the novel coronavirus hit, forcing Gamble to first to seek factory closures, then push for safety precautions as they reopened. Now the union faces another challenge, temporary plant shutdowns as the auto industry grapples with a global shortage of computer chips.

“My original intent as a UAW Vice President was to retire at the end of June 2021, and after looking at the progress we have made and the best interests of UAW members for a stable transfer of power, this is the right time for me to turn over the reins,” Gamble said in a statement.

He said Friday that he hopes his retirement will bring a period of multiple term presidents that lead the union. “You need time to settle in and look at the long-range focus and priorities of our membership,” he said. “Especially in this time of vast technological change.”

“His whole tenure has been marked by crisis after crisis,” said Kristen Dziczek, senior vice president at the Center for Automotive Research, who follows labor issues. “He had a tough row to hoe, and it came out OK.”

Gamble, the union's first Black president, said when he was appointed that he wanted to turn over a clean union that was on solid footing by the time he leaves. He largely did that, Dziczek said, especially because he was able to avoid a threatened federal takeover due to the scandal.

Eleven union officials and a late official’s spouse have pleaded guilty in the corruption probe since 2017, including the two presidents who served before Gamble, Gary Jones and Dennis Williams. Both were sentenced to prison.

Not all of the convictions were linked. The first wave, which included some Fiat Chrysler employees, involved money paid as bribes from a Fiat Chrysler-UAW training center in Detroit. Jones and Williams were caught in an embezzlement scheme with the leaders taking thousands of dollars of union money to buy golf clubs, booze, lavish meals and to rent expensive villas in Palm Springs, California.

During the probe, Matthew Schneider, the former U.S. Attorney in Detroit who led the investigation, said the corruption was so deep that the federal government may take over the union.

But Gamble agreed to financial safeguards and a court-appointed monitor to oversee operations for six years, as well as an election for members to decide if they want to vote directly for union leaders rather than choosing delegates to a convention who would then pick the leadership. Normally the convention delegates voted for a new president chosen by the outgoing one.

That election must take place by Nov. 12 under a court agreement. If members approve direct voting, the election would have to happen by June of next year.

Although federal authorities continue to their inquiry, Schneider said in December he had no reason to investigate conduct by Gamble.

During Gamble's tenure, the union's finances improved after paying 49,000 workers $250 per week during the GM strike, which cost the company around $4 billion.

The union ended 2019 with $1.1 billion in assets and just over $107 million in liabilities, according to forms filed with the U.S. Labor Department. But by the end of last year, assets grew to $1.13 billion and liabilities shrank to $101 million.

Gamble joined the union in 1974, repairing welding machines in Ford's Dearborn, Michigan, frame plant. He became vice president of the local union office, and twice served on a national team that bargained with Ford.