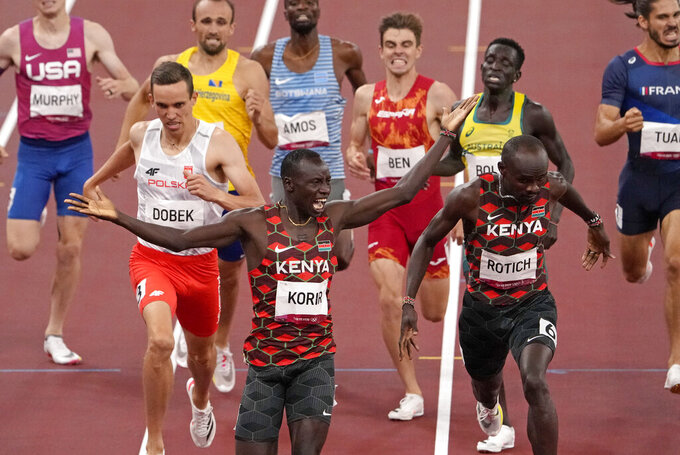 Emmanuel Korir, of Kenya, celebrates as he wins the gold medal ahead of Ferguson Rotich, of Kenya in the final of the men's 800-meter at the 2020 Summer Olympics, Wednesday, Aug. 4, 2021, in Tokyo, Japan. (AP Photo/Charlie Riedel)

TOKYO (AP) — Emmanuel Korir had barely settled in as the new Olympic champion in the 800 meters when the old champ —one David Rudisha — felt the need to talk to his successor.

Shortly after Korir walked off the track at the Olympic Stadium after leading a Kenyan one-two finish in the 800 final, a cell phone rang in the pocket of a Kenya team official next to him. The official produced the phone, popped it on speaker and announced: “It's Rudisha.”

Sure enough, the world-record holder and two-time Olympic champion's voice rang out all the way from Kenya.

Korir was lost for words, and with good reason. He'd just clinched Kenya's fourth straight Olympic title in the men's 800, and had succeeded the man they call "the king" back home.

Now, with his country's flag draped over his shoulders and basking in the glory of his first Olympic gold, this made it complete for Korir.

Rudisha, who didn't make Kenya's team this year after a long injury battle, laughed on the line, and then offered a little early advice.

"You’ll start feeling that weight now," he said. “That's good. That's good. Fantastic. All the best. We’ll see you when you come back home.”

And then, just like that, the king rang off and was gone.

The timing of the call was magical.

The 26-year-old Korir had moments earlier explained how he'd been inspired by Rudisha when he was a kid.

“We used to train with Rudisha when I was still in high school,” Korir said. “I never knew one day maybe I was going to run the 800 meters (at the Olympics). So it happened now. Like Rudisha.”