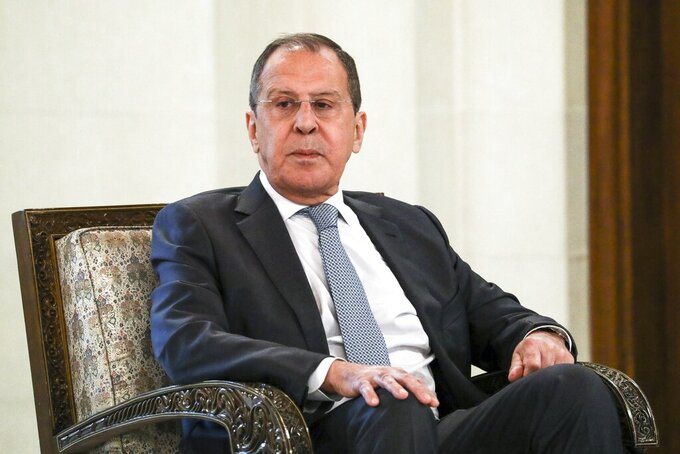 DAMASCUS, Syria (AP) — A senior Russian delegation in Damascus is discussing the expansion of economic and trade cooperation with Syria and the two sides expect to sign an economic pact before the end of the year to circumvent U.S. sanctions, Russia's deputy prime minister said Monday.

Yuri Borisov said the Russian side is expecting to sign the pact in December, adding that it would “outline a new framework for trade and economic ties between the two countries for the coming years.”

The aim, he said, was to provide relief from the U.S. sanctions, which he said were “strangling” the Syrian people. Borisov spoke at a joint press conference with Syrian Foreign Minister Walid al-Moallem in Damascus after the delegation met with Syrian President Bashar Assad.

Syria faces an unprecedented economic crisis after nearly a decade of civil war and Western sanctions. The economic and financial situation has been worsened by the financial crisis in neighboring Lebanon, where many Syrians have their money, and the coronavirus pandemic.

Russian Foreign Minister Sergey Lavrov, who is visiting Damascus for the first time since 2012, also attended the news conference.

Russia has been a close ally of Assad in Syria’s devastating nine-year civil war, lending his government in Damascus vital military, economic and political support. Russian troops have been fighting alongside Syrian government forces since 2015, and President Vladimir Putin has visited the war-torn country twice, including in January this year.

“Our visit to Syria focuses on the prospect of cooperation to develop relations between the two countries in light of new developments in the region," said Lavrov. He criticized U.S. and Western sanctions on Syria, saying they are “trying to strangle the Syrian people.”

Borisov said Russia wanted to develop relations with Syria in several fields, including the energy sector.

The Syrian pro-government Al-Watan newspaper earlier quoted Syria's ambassador to Russia, Riad Haddad, as saying that the Russian delegation's visit “is of special importance, given the political and economic files that will be discussed." Those include progress by a committee discussing possible amendments to the Syrian constitution and Western sanctions on Syria, as well as efforts to fight terrorism.

Talks between government, opposition and civil society delegations resumed in Geneva late last month on a possible new constitution for the country. The U.N.'s envoy for Syria, Geir Pedersen, has called the talks a prospective “door-opener” to a final resolution of Syria’s long-running conflict.

The pandemic forced the postponement of an earlier meeting in March.