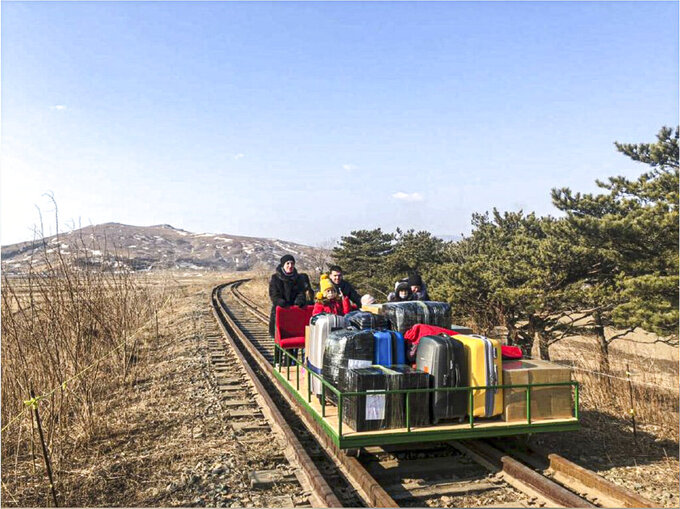 In this image taken from a video released by Russian Foreign Ministry Press Service Thursday, Feb. 25, 2021, a group of Russian diplomats push hand-pushed rail trolley with their children and suitcases to the border with Russia. A group of Russian diplomats and their family members returned to Russia from North Korea on a hand-pushed rail trolley on Thursday because of COVID-19 restrictions in the country, Russia's Foreign Ministry said in a Facebook post. (Russian Foreign Ministry Press Service via AP) 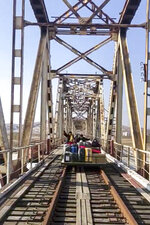 MOSCOW (AP) — A group of Russian diplomats and their family members returned to Russia from North Korea using a hand-pushed rail trolley on Thursday because the coronavirus pandemic has halted all passenger traffic between the countries, Russia's Foreign Ministry said.

“Since the borders have been closed for over a year and passenger traffic has been halted," staff members of the Russian Embassy in North Korea and their family members embarked on “a long and difficult journey to get home,” the ministry said in a Facebook post.

The group of eight people took a 32-hour train ride, followed by two hours on a bus. They then put their children and luggage onto a rail trolley and pushed it for more than a kilometer (more than half a mile) across the border into Russia.

The ministry posted photos showing embassy employees with their children and suitcases on a trolley. A video showed two people pushing the trolley across a railway bridge.

Russia's Interfax news agency reported on Friday morning that the group later took a flight to Moscow from the far-eastern city of Vladivostok.

North Korea has claimed to be coronavirus-free, and sealed its borders and halted passenger traffic with other countries. Outside experts are highly skeptical of the North’s claim of having no COVID-19 cases.