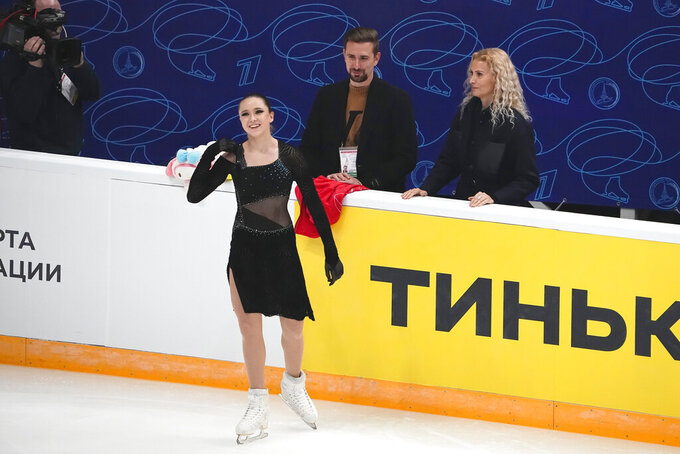 Russian Kamila Valieva, foreground, prepares to compete in the women's free skate program during the figure skating competition at the 2022 Russian Figure Skating Grand Prix, the Golden Skate of Moscow, as her coach Eteri Tutberidze, right, looks at her at Megasport Arena in Moscow, Russia, Sunday, Oct. 23, 2022. With its teams suspended from international competitions such as the Grand Prix series, Russia is holding its own series of figure skating events in various cities, also under the Grand Prix name. (AP Photo/Alexander Zemlianichenko)

LAUSANNE, Switzerland (AP) — Russian figure skater Kamila Valieva faces a potential four-year doping ban which would rule her out of the 2026 Winter Olympics in Milan-Cortina d'Ampezzo, the Court of Arbitration for Sport said Monday.

CAS said it had registered an appeal from the World Anti-Doping Agency, which said last week it was taking the case to the Switzerland-based tribunal. WADA argues Russian officials have not made progress in resolving the 16-year-old Valieva's case nearly a year after she tested positive for a heart medication banned in sports.

The CAS statement said WADA is seeking “the athlete be sanctioned with a four-year period of ineligibility starting on the date on which the CAS award enters into force." If granted, that would cover the next Olympics in Italy.

WADA also wants Valieva to be disqualified from all competitions since December 2021, when she gave a sample which later tested positive. That would include losing the gold medal she won in the team event at the Beijing Olympics in February, when she was 15.

Pandemic-related delays at the Swedish laboratory processing Valieva's sample meant the result was only revealed after she had won the team gold. A previous CAS panel opted against a provisional suspension and allowed Valieva to keep skating in the individual event, where she placed fourth. Her age was a factor in the decision to let her skate.