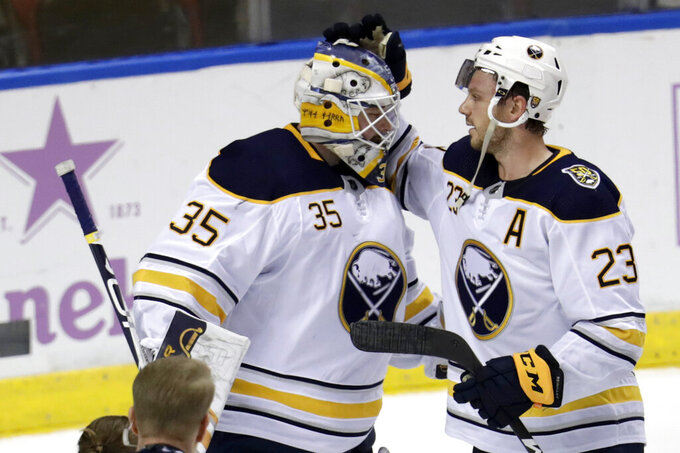 Olofsson was a restricted free agent and coming off a season in which he finished seventh in the Calder Cup vote for rookie of the year honors. He was selected to the NHL’s All-Rookie team and had a chance to finish higher in the Calder voting if not for missing 15 games with a lower body injury.

The 25-year-old finished third on the team with 20 goals and 42 points in 54 games. Olofsson most notably set an NHL record in becoming the first player to score his first seven goals on the power play.

Olofsson was scheduled to have an arbitration hearing on Nov. 4.

Selected by Buffalo on the seventh round of the 2014 draft, Olofsson was a late bloomer, spending four seasons developing in the Swedish Elite League before making the jump to North America in 2018 to play with Buffalo’s AHL affiliate in Rochester.

Olofsson’s signing comes after the Sabres locked up their two other arbitration-eligible restricted free agents before their hearings were scheduled this week.

On Sunday, Buffalo signed forward Sam Reinhart to a one-year, $5.2 million contract, and goalie Linus Ullmark to a one-year deal worth $2.6 million.

The moves essentially settle a lineup that has undergone several offseason changes under first-year general manager Kevyn Adams, who took over after Jason Botterill was fired in June.

The moves were made in a bid to upgrade a team in the midst of a nine-year playoff drought, the NHL’s longest active streak and one year from matching a league record.

Hall provides an immediate influx of offense to a team that had just three players score 20 or more goals, rounded out by Reinhart and captain Jack Eichel. Staal’s addition addressed the Sabres' need for a second-line center.

“Seeing those guys coming in is obviously great,” Reinhart said during a video conference call earlier in the day. “It’s very exciting to see, and we’re all looking forward to coming back and trying to turn this around.”

Reinhart finished second on the team with 22 goals and 28 assists, marking his third straight season with 50 or more points.

Selected with the No. 2 pick in the 2014 draft, Reinhart expressed mixed feelings over landing a one-year deal as opposed to a longer-term contract.

“I think I’ve done a lot that I want to be recognized for, and be here long-term for sure,” he said. “Do I think I’ve proven everything? No. Absolutely not. I don’t think anyone can say that with the level or lack of success we’ve really had as a team.”

Ullmark went 17-14-3 with a 2.69 goals-against average in completing his second NHL season in which he eventually took over the starting duties from Carter Hutton. Ullmark was particularly sharp down the stretch, closing the year 6-3 before the season was stopped in March as a result of the coronavirus pandemic.

Ullmark, who also spoke earlier in the day, appreciated the backing the Sabres showed by re-signing him, and looked forward to being more consistent next season.

“To prove every doubter wrong is probably the most satisfying thing as a goaltender, except for saving all the shots in a single game,” Ullmark said, speaking from his home in Sweden. “It’s going to be my goal to take my game to the next level and prove myself.”