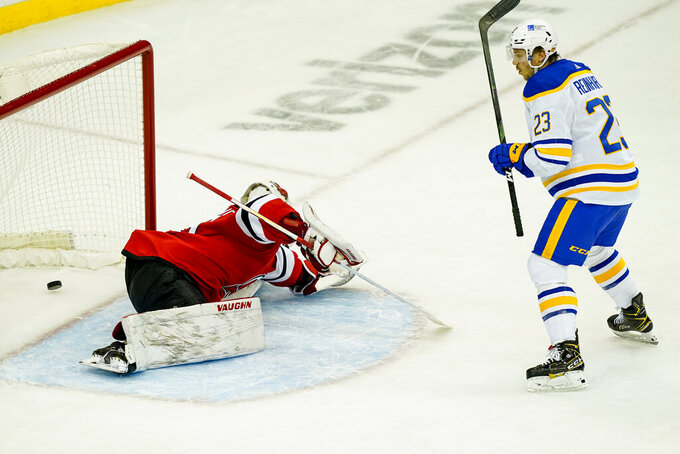 NEWARK, N.J. (AP) — The Buffalo Sabres are a much better team when they get on the scoreboard first.

The Sabres got an early goal from defenseman Colin Miller and two more from Sam Reinhart in posting a much-needed 3-2 win over the New Jersey Devils on Saturday, snapping a four-game losing streak.

The Sabres have scored first in four of 14 games this season and have posted a 3-0-1 mark when they do. When they give up the first one, they are 2-7-1.

“There was just a real tone, tone, tone of joy, actually, after the 1-0,” Buffalo coach Ralph Krueger said. “Guys were just like, ‘Wow, when was the last time this happened?’ And you can feel, without anybody really saying too much, that it really relaxed the group and we could settle into the game that we wanted to play."

Not only did the Sabres take the lead, Reinhart stretched the margin to 3-0 after 40 minutes and goaltender Linus Ullmark made 25 saves and fended off a third-period New Jersey push.

It was the Sabres' first win since beating the Devils in a shootout on Jan. 30, the last time they scored the first goal.

Jack Eichel added two assists for Buffalo, which returned to play this week after missing two weeks because of the coronavirus pandemic.

“I mean, every win is huge," Reinhart said. "You know, it obviously hasn’t been going our way since we were able to come back. But, you know, I think getting on the road has been important for our guys. I would say that we can’t go anywhere, so to spend some time traveling and in hotels has helped us.”

Kyle Palmieri and P.K. Subban scored in the third period for the Devils, who welcomed center Nico Hischier for his first game this season by naming him captain. Mackenzie Blackwood (4-1-1) had 26 saves in losing for the first time in regulation this season.

“I don’t think we skated very well,” Devils coach Lindy Ruff said. “As a team, we were low on energy and got to give them credit, they beat us to a lot of pucks, they forced us into some turnovers. Their energy seemed to be better than us.”

The Sabres opened a 3-0 lead after two periods and the faceoff circle was key. The goals came after faceoff wins in the Devils' end.

Miller beat a screened Blackwood after Eric Staal won a faceoff. Reinhart got his fourth and fifth goals of the season in the second period after faceoff wins by Eichel.

Palmieri closed the gap to 3-1 in the opening minute of the third period. Subban scored a power-play goal with 3:16 left in regulation and the Devils' net empty.

Miller blocked a last-second shot from between the circles by Pavel Zacha to preserve the win.

Sabres defenseman Jake McCabe was helped off the ice in the third period with an apparent knee injury. Krueger was concerned about the injury that he described as lower body.

“We don’t have a final diagnose yet, but it rips my heart out to see what Jake has gone through,” the coach said. "Also coming off of the COVID battle with having had symptoms and now there is a question for the future. There’s a big, big ache in my heart right now which the win certainly can’t neutralize.”

Saturday marked the first time since Jan. 14 that the Devils have not had a player on the NHL's COVIDS-19 list for some reason. The team was forced to shut down for 15 days after a spike on Jan. 31 following a game with the Sabres. The high point was 19 players isolated on Feb. 8.

Sabres rookie Dylan Cozens returned to the lineup after missing three games because of the COVID-19 protocol. Forward Casey Mittelstadt and defenseman Rasmus Ristolainen each missed their fourth straight game.

Sabres: At Islanders on Monday. Buffalo and the Devils will have home and home games on Tuesday and Thursday

Devils: Travel to Washington to face the Capitals on Sunday, before the Sabres again.