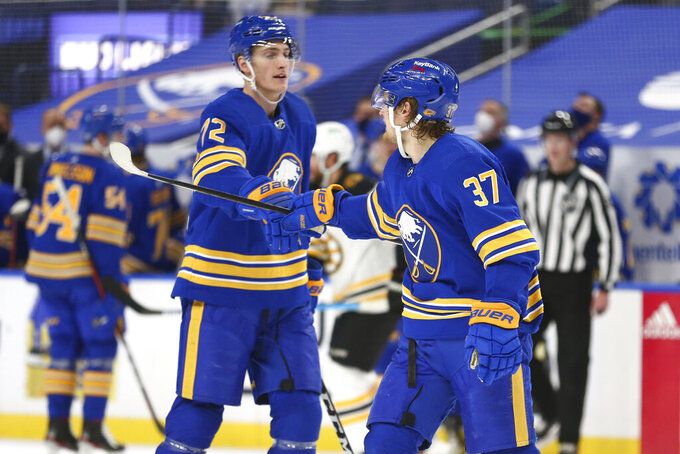 BUFFALO, N.Y. (AP) — Sam Reinhart scored three times, including a game-sealing empty-netter, and the Buffalo Sabres avoided a third-period collapse in a 6-4 win over the Boston Bruins on Friday night.

Casey Mittelstadt and Arttu Ruotsalainen also scored for Buffalo, which bounced back after being outscored 7-1 in losing the first two games of a three-game homestand against Boston, including a 5-1 loss on Thursday.

Steven Kampfer had a goal and two assists, and Nick Ritchie and Kevan Miller and Taylor Hall scored for Boston.

Boston scored three times in a 5:06 span, capped by Hall’s centering pass deflecting in off Buffalo defenseman Rasmus Ristolainen’s stick with 2:48 remaining that cut the Sabres’ lead to 5-4. Reinhart secured the win by scoring into an empty net with 42 seconds left.

With the far more established fellow Finnish countryman Tuukka Rask in the Bruins net, the 22-year-old Luukkonen rebounded after giving up a goal to Kampfer on the first shot he faced 2:15 into the game. He stopped the next 28 shots before Ritchie scored to cut Buffalo’s lead to 5-2 with 7:54 remaining.

Boston squandered an opportunity to gain ground in a tightly contested race for the East Division lead. The Bruins remain in fourth with four points separating the top four teams.

Rask, coming off a 32-save shutout of Buffalo on Tuesday, was yanked after stopping 24 shots and giving up Ruotsalainen’s goal that put Buffalo up 4-1 at the 1:14 mark of the third period.

Jaroslav Halak allowed Reinhart’s second power-play goal on the first shot he faced, and finished with four saves in his first appearance since entering the NHL’s COVID-19 protocol on April 5.

The Bruins were without captain Patrice Bergeron, who was a late scratch as a result of a lower-body injury. The team did not provide any other details in announcing the news shortly before the opening faceoff.

The Bruins appeared flat at a time coach Bruce Cassidy said several players were feeling the after-affects of receiving their COVID-19 vaccine immediately following the game in Buffalo on Tuesday.

Dahlin scored the go-ahead goal 6:54 into the second period, when teammate Riley Sheahan’s drop pass missed teammate Tobias Rieder in the slot and the puck slid to the blue line. Dahlin slapped a shot inside the right post, with Rask screened by a crowd in front.

Mittelstadt made it 3-1 at the 14:17 mark of the second period, before Ruostalainen and Reihart scored 3:07 apart in the opening five minutes of the third period.

Luukkonen didn’t let down after being beaten by Kampfer, who snapped a shot inside the right post from the left circle. One of his best saves came in the second period, when he squared up and got his shoulder on Mike Reilly’s blast from the high slot during an odd-man rush. He also got some help with the Bruins hitting the post three times.

Luukkonen, Buffalo’s second-round pick in the 2017 draft, got the start with the Sabres out of playoff contention and with Linus Ullmark and backup Carter Hutton sidelined with lower-body injuries. The 22-year-old from Finland spent the past week practicing with the Sabres to acclimate to the NHL level, while also getting an opportunity to scout the Bruins the past two games.

Buffalo converted two of three power-play opportunities after going 2 of 27 in its previous eight games, including 0 of 11 in the past two against Boston. The Sabres entered the game converting just five of their past 69 power-play chances over a 30-game stretch.

Boston coach Bruce Cassidy said about 80% of the Bruins staff and players have been vaccinated after several players received their shots in Buffalo on Tuesday night. The Sabres did not provide an exact number in announcing, “many players and staff have received at least their first vaccine dose.”

Sabres: Luukkonen became the fifth goalie to play for the Sabres this season. Buffalo joined the Ottawa Senators, who have also had an NHL-high five goalies make an appearance. He became the 398th player, and 39th goalie to play for Buffalo in 302 games -- a franchise-high against any opponent -- versus Boston. ... With Ullmark expected to miss the remainder of the season, interim coach Don Granato called it “probable” Hutton will return.