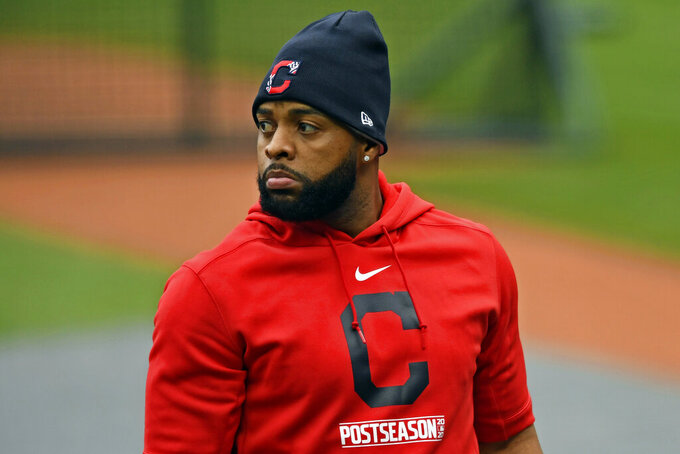 FILE- In this Sept. 29, 2020, file photo, Cleveland Indians' Carlos Santana exits the batting cage before Game 1 of an American League wild-card baseball series against the New York Yankees in Cleveland. The Cleveland Indians have declined contract options on Brad Hand and first baseman Carlos Santana for next season, decisions that will initially cut $27 million from the team's payroll. (AP Photo/David Dermer, File)

It seemed as if every time Mike Matheny's phone rang during the offseason, Kansas City Royals general manager Dayton Moore was on the other end, ready to give his skipper some more good news about his roster.

The arrival of the longtime Indians slugger and the young Red Sox outfielder filled out a roster that could be sneaky good as the Royals attempt to build on the big step forward they took during the pandemic-shortened 2020 season. Santana brings some much needed on-base ability along with a bit of power, and Benintendi combines championship pedigree with decent plate discipline and excellent fielding ability as the replacement for retired outfielder Alex Gordon.

It's safe to say Matheny was eager to see them join the rest of the team Monday for its first full-squad workout of camp.

“I think it's probably a healthy thing where you want to come in and find your place. You want to come in and show you can bring some value,” Matheny said. “Now, there are definitely some examples of guys coming in and trying to do too much. We have seen that in every sport. But I don't think we're talking about players that feel that pressure.”

That's because Santana and Benintendi are joining a lineup with plenty of potential that otherwise returns intact.

Whit Merrifield is a two-time big league hits leader who finished sixth last season. Fellow outfielder Jorge Soler led the league with 48 homers during the 2019 season, when third baseman Hunter Dozier led the league in triples. Salvador Perez won his third Silver Slugger at catcher last season, and shortstop Adalberto Mondesi not only led the league with 24 stolen bases but hit .356 with six homers and 20 RBIs over the final month of the season.

“There's a nucleus, a core here," Matheny said, “and Carlos and Andrew are a real nice addition to it. The conversations I've had with both, this is a nice fit for you and it's not that we have to jump on your shoulders. We're all pulling here. Why don't you come in and help pull in the same direction? That's a great atmosphere for players to come in and be themselves, and that's what we're asking them to do.”

There are still plenty of question marks when it comes to the lineup.

The Royals signed outfielder Michael Taylor to primarily handle center field duties in spacious Kauffman Stadium, but he never showed over parts of seven years with the Nationals to be a threat at the plate. And while Nicky Lopez was a finalist for the Gold Glove at second base, he also has offensive limitations that leave a hole at the bottom of the order.

Nevertheless, the Royals feel a whole lot more confident in their ability to produce than they were last season, when they ranked 24th in runs and in the bottom half of the league in just about every other statistical category.

Nobody knows that any better than the Kansas City pitching staff.

Benintendi is a career .346 hitter against the Royals, the highest of anybody he's faced more than six times, with a couple of homers in 17 careers games.

Santana is a career .288 against his new team with more home runs (31) and RBIs (93) than against any other opponent, even with many of those games being played in spacious Kauffman Stadium.

“The guy is a stud. You just know every time you face him it's going to be a professional at-bat,” Royals ace Brad Keller said. “I'm glad we don't have to face him anymore. He's on our side. They have to worry about that now.”

Ultimately, that's what the Royals hope they have in their new-look lineup.

A group opponents finally have to worry about.

NOTE: The Royals signed right-handed reliever Brad Brach to a minor league contact and invited him to big league camp. The 35-year-old Brach was 1-0 with a 5.84 ERA in 14 games for the New York Mets last year. The Mets released the 10-year veteran earlier this month.