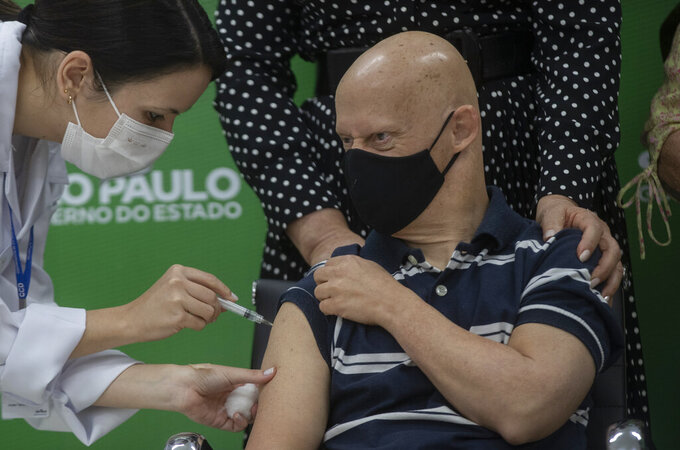 A health worker gives a shot of the AstraZeneca COVID-19 vaccine to Sergio Quitanilla, 55, during a priority vaccination program for people with Down syndrome, in Sao Paulo, Brazil, Monday, May 10, 2021. (AP Photo/Andre Penner)

SAO PAULO (AP) — Authorities in Brazil's most populous state on Wednesday said they have mobilized to try to convince the Chinese government to authorize the export of raw material to make millions of COVID-19 vaccines needed amid a sudden shortage.

The South American nation is highly dependent on a shot made by pharmaceutical company Sinovac for its immunization efforts, and in recent weeks several Brazilian cities have either suspended or delayed vaccinations due to faltering supplies.

The factory that produces the vaccine locally, at Sao Paulo's state-run Butantan Institute, has slowed production due to lack of raw material, and Brazil's President Jair Bolsonaro and his economy minister, Paulo Guedes, made statements critical of China this month. Sao Paulo's Gov. João Doria — an adversary of Bolsonaro's — implied their comments may have created the bottleneck.

Hours after speaking to China’s ambassador to Brazil, Doria said in a press conference that Bolsonaro and Guedes should apologize to the Asian nation for their recent comments so China can resume exports.

“He (Chinese ambassador Yang Wanming) told me he will talk to China’s ministry of foreign affairs tomorrow to renew his appeal to release the raw material that is ready at the Sinovac laboratory,” Doria said. “That raw material is ready and available in refrigerated containers, just waiting for the authorization of the Chinese government.”

Doria added there was risk of a halt in immunization efforts if about 10,000 liters of raw material stuck in China — enough to bottle 18 million shots — doesn't arrive soon.

The Chinese embassy in the capital Brasilia, when contacted by the AP, didn't confirm the call with Gov. Doria took place.

Dimas Covas, the head of the Butantan Institute, also said on Wednesday he had called Brazil’s ambassador to China, Paulo Mesquita, to ask him to step up the pressure on Beijing. He added that a representative of Sao Paulo’s state government who had been based in Shanghai moved to the Chinese capital one week ago to bolster their efforts.

Bolsonaro suggested on May 5 that China had benefited economically during the pandemic and echoed a conspiracy theory that the disease may have been created in a laboratory, without providing evidence.

”It is a new virus, nobody knows if it was born in a laboratory or by some human being that ate an inadequate animal. But it is there. The military knows what chemical, bacteriological and radiologic war is. Aren’t we facing a new war?” Bolsonaro said during an event at the presidential palace. “Which country grew its GDP the most? I won’t tell you.”

Later that day, the Brazilian president denied that he had been referring to China and blamed the media for the blowback.

A few days earlier, Economy Minister Guedes said during a live feed of a meeting with the nation's health minister that the Chinese “invented” COVID-19.

“How can they attack those who supply us with raw materials and vaccines to save Brazil’s population?” Doria said at the press conference.

The AstraZeneca vaccine, the only other that Brazil has so far used on a massive scale, also depends on raw material imported from China. Only 7.3% of the country’s population has been fully vaccinated against the disease, according to Our World in Data, an online research site. More than 420,000 Brazilians have died of COVID-19.

Brazil’s foreign relations ministry said in a statement Tuesday night it is “permanently following the process of authorization of raw materials export.” It added that foreign minister Carlos França has recently spoken with China’s foreign affairs minister, Wang Yi, seeking more cooperation in the fight against the pandemic

“(Chinese authorities) reiterated that possible delays are not intentional, given that China is exporting raw material to several countries, which brings an extensive demand and overload both in the fabrication of vaccines and ingredients and in bureaucratic procedures,” the foreign relations ministry said in an emailed response to questions.