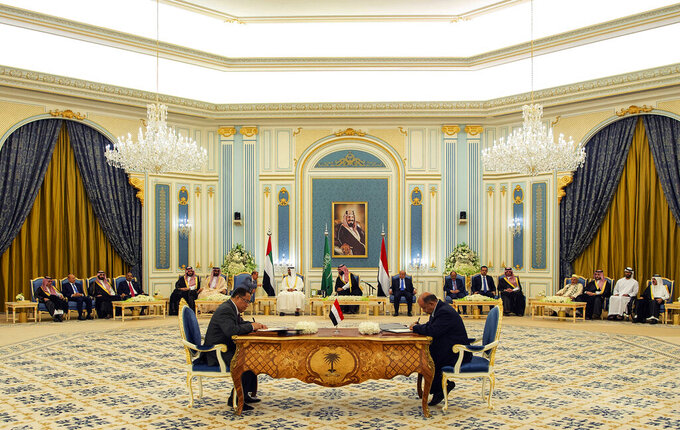 DUBAI, United Arab Emirates (AP) — A Saudi-led coalition mired in a yearslong war in Yemen on Monday urged Emirati-backed southern separatists to honor the terms of a Riyadh peace deal and share control of the port city of Aden with the country's internationally recognized government.

The statement by Saudi Arabia comes after the separatists’ Southern Transitional Council again claimed sole control on Sunday of Aden, a Red Sea port that serves as the seat of the internationally recognized government as Yemen's Shiite rebels, known as Houthis, hold the country's capital, Sanaa.

The council's decision adds yet more complexity to the grinding war in Yemen that has pushed the Arab world's poorest nation to the brink of famine and killed over 100,000 people.

The Saudi statement urged the council to return to the terms of the November 2019 Riyadh agreement, which ended earlier fighting between the separatists and the government forces — ostensible allies in the war against the Houthis — after the council seized control of Aden just a few months earlier.

That deal had called for both sides to remove heavy military equipment from Yemeni cities under their control and form a unity government that included equal representation. But that deal had yet to be implemented as the war continued, massive floods struck Aden and Yemen faces the threat of the coronavirus pandemic and the COVID-19 illness it causes.

In its statement, the Saudi-led coalition urged the council to honor the deal “to unite Yemeni ranks, restore state institutions and combat the scourge of terrorism.”

The deal “entails forming a competent government" that would operate out of Aden “to tackle economic and developmental challenges, in light of natural disasters such as floods, fears of the COVID-19 pandemic outbreak and work to provide services to the brotherly people of Yemen.”

The statement did not say what Saudi Arabia would do if the council refused. The kingdom, itself focused on the coronavirus outbreak, declared a unilateral cease-fire with the Houthis in April that was later extended through the holy Muslim month of Ramadan. But fighting has continued, with each side blaming the other for violations.

The Southern Transitional Council had been the on-the-ground allies of the United Arab Emirates, once Saudi Arabia's main partner in the war that subsequently withdrew from the conflict. The council's backers often fly the flag of former Communist South Yemen and have pushed to again split the country into two like it was from 1967 to 1990.

Emirati Minister of State for Foreign Affairs Anwar Gargash said on Twitter that his nation had “absolute confidence” in Saudi Arabia's desire to formalize the power-sharing agreement.

“Frustration over delaying implementation of the agreement should not be a reason to unilaterally change the status quo,” he wrote.

In Brussels, European Commission spokesman Peter Stano told reporters on Monday that the EU has taken note of the developments in southern Yemen, which he said undermine the Riyadh agreement, a key to de-escalation.

“What Yemen needs right now is peace,” he said, calling on the separatists “to implement the provisions that were agreed under the auspices of Saudi Arabia in this agreement.”

In a separate development, Yemeni tribal leaders and security officials said Monday that two suspected U.S. drones strikes killed at least six al-Qaida militants in Yemen’s southern province of Shabwa in recent days. The CIA declined to comment and the U.S. military, which also has launched drone strikes in Yemen, did not respond to a request for comment.

The militants were killed in two separate strikes in the district of Bayhan, which is known as a stronghold of Yemen's al-Qaida branch, the security officials said. The officials spoke on condition of anonymity because they were not authorized to speak to reporters, while the tribal leaders did so for fear of reprisals.