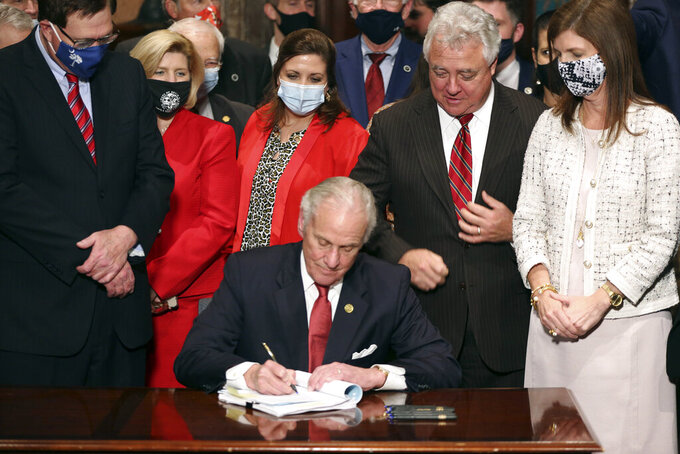 South Carolina Gov. Henry McMaster signs into law a bill banning almost all abortions in the state Thursday, Feb. 18, 2021, in Columbia, S.C. On the same day, Planned Parenthood filed a federal lawsuit to stop the measure from going into effect. The state House approved the “South Carolina Fetal Heartbeat and Protection from Abortion Act” on a 79-35 vote Wednesday and gave it a final procedural vote Thursday before sending it to McMaster.  (AP Photo/Jeffrey Collins)

COLUMBIA, S.C. (AP) — South Carolina’s governor on Thursday signed a bill banning most abortions, one of his top priorities since he took office more than four years ago. Planned Parenthood immediately sued, effectively preventing the new law from taking effect.

The “South Carolina Fetal Heartbeat and Protection from Abortion Act, is similar to abortion restriction laws that a dozen states have previously passed. All are tied up in court. Federal law, which takes precedence over state law, currently allows abortion.

"There’s a lot of happy hearts beating across South Carolina right now,” Republican Gov. Henry McMaster proclaimed during a ceremony at the Statehouse attended by lawmakers who made the proposal a reality.

Immediately after he signed the bill, a group of legislators and members of the public, standing shoulder to shoulder and wearing masks to protect against the coronavirus, began singing the words “Praise God” to the tune of “Amazing Grace.”

The House passed the bill by a 79-35 vote on Wednesday after hours of emotional speeches from both supporters and opponents, and gave the measure final approval on Thursday. Moments after the Thursday vote, Planned Parenthood announced that it was filing a lawsuit. The South Carolina law, like those of other states that are currently being challenged, is “blatantly unconstitutional,” said Jenny Black, president and CEO of Planned Parenthood South Atlantic.

Supporters of restrictive abortion laws are trying to get the issue before the U.S. Supreme Court in the hopes that — with three justices appointed by Republican former President Donald Trump — the court could overturn Roe v. Wade, the 1973 decision supporting abortion rights. The Supreme Court has previously ruled that abortion is legal until a fetus is viable outside the womb — months after a heartbeat can be detected, Black noted.

State bills to restrict or ban abortion “are plainly absurd,” she said. “There is no other way around it.”

South Carolina Attorney General Alan Wilson issued a statement Thursday saying that his office “will vigorously defend this law in court because there is nothing more important than protecting life.” He stood near McMaster as the governor signed the bill.

Abortion opponents have pushed for the ban for years, but it got stuck on a procedural hurdle in the Senate. Republicans gained three seats in the Senate in November's election and the bill was tabbed “Senate Bill No. 1” to show it was the top priority.

“We’re about to do what I’ve been trying to do for 25 years: shut down the abortion industry in South Carolina,” Republican Sen. Larry Grooms said moments before the governor signed the bill.

Democrats say Republicans wasted taxpayer money by passing a bill that everyone knew would be challenged in court. They also argue that there are more important issues needing their attention, such as COVID-19, health care and education.

“We’re tired of the hypocrisy," said House Minority Leader Todd Rutherford. Rutherford said Democrats have also had enough of lawmakers across the aisle telling them they don't care about life.

The lawsuit by Planned Parenthood and The Center for Reproductive Rights argues that South Carolina’s new law “is in flagrant violation of nearly five decades of settled Supreme Court precedent.” The suit says a high rate of women, especially African Americans, die during or immediately after childbirth in South Carolina. The abortion ban would fall hardest on low-income women, who wouldn't be able to travel to a nearby state where abortion is still permitted, the suit says.

A hearing to determine if the law should be suspended while the lawsuit is being heard is scheduled for Friday afternoon.

Like Democratic lawmakers, Black said the focus on abortion not only wastes money by fighting established law, but also ignores a host of other important issues.

“If lawmakers are really interested in making lives better, we have a long list of priorities they can focus on,” she said.

South Carolina's law requires doctors to perform ultrasounds to check for a heartbeat in the fetus. If one is detected, the abortion can only be performed if the pregnancy was caused by rape or incest or the mother’s life is in danger.

The measure does not punish a pregnant woman for getting an illegal abortion, but the person who performed the abortion could be charged with a felony, sentenced up to two years and fined $10,000 if found guilty.