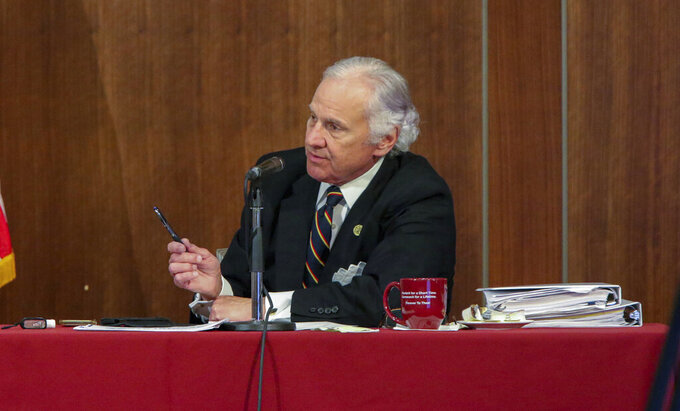 Gov. Henry McMaster speaks during a meeting of the Accelerate SC economy initiative in Columbia, S.C., Tuesday, May 19, 2020. (Tracy Glantz/The State via AP)

COLUMBIA, S.C. (AP) — The leader of South Carolina's health agency announced Wednesday that he is stepping down after a health scare to spend more time with his family as the state continues to fight the coronavirus.

Rick Toomey's decision to leave the Department of Health and Environmental Control came less than 15 months after he took over the agency. DHEC's board had spent 17 months looking for its new director before choosing Toomey, who was a board member.

Toomey spent two weeks on leave starting in late March because of high blood pressure. Toomey said that health scare played a part in his decision to leave, along with wanting to spend more time in his Beaufort home, where his new grandson also lives.

“It is a difficult decision," Toomey said at an emergency board meeting Wednesday. “I have grown to love, to admire the effort of the individuals who make up DHEC.”

The board then voted to make agency attorney Marshall Taylor the interim director after Toomey leaves June 10.

Nearly every board member praised Toomey for his leadership.

"I really wished we could have had you a little bit longer. Your leadership during this crisis in south Carolina has been incredible," board member Seema Shrivastava-Patel said.

Toomey was president of Beaufort Memorial Hospital from 2007 to 2016 before Gov. Henry McMaster appointed him to the DHEC board in February 2018.

Toomey said it was hard to leave in the middle of the COVID-19 pandemic, but he felt like the agency reaching its goal of testing 2% of the state’s population — or about 110,000 people — in May along with South Carolina's reopening committee, Accelerate SC, planning to finish its work Thursday made the timing work.

“I wish I could have maybe stayed a little bit longer. Yes, there's a little sense of remorse. But at the same time, I balance that with we've accomplished a lot and DHEC will continue to accomplish a lot.”

“We're going to miss you. But the job you've done, the strengths you've created in the organization will last for many years,” McMaster said. “Having worked with us to get us through some very hard parts of this very new challenge — we will be eternally grateful.”

More than 10,600 people in South Carolina had tested positive for the coronavirus with at least 466 deaths, DHEC said in its Wednesday update.

The 20 COVID-19 deaths reported Wednesday were the most in a single day in South Carolina.

Along with Toomey's recommendations, the Accelerate SC committee's final meeting Thursday will include discussions of five weeks’ worth of meetings between the government, education and business leaders.

One recommendation from the committee's executive director will be protecting businesses from lawsuits if they follow safety recommendations.

State Sen. Tom Davis is leading a Senate subcommittee discussing a possible bill. The Beaufort Republican said it must pass during the week or two special session that is likely in mid-June.

With so few days to meet, the bill will likely need to bypass committees in both the House and Senate and come directly before each chamber. Any member of the House or Senate could object to that.

Davis said it isn't just businesses, but doctors, community pools and gyms that are afraid to open without protection.

But Sen. Vincent Sheheen said a badly crafted bill could hurt confidence in the other direction.

"They have immunity granted by us to negligently injure you severely and you are going to show up and eat a meal?” the Democrat from Camden said.

Also on Wednesday, the South Carolina Supreme Court declined a request from state Democrats to extend no excuse absentee voting to November's general election. When they filed suit, Democrats also wanted an extension of absentee voting to the June 9 primaries, but the General Assembly changed the law for the primaries before the justices ruled.

The justices said lawmakers plan to meet in September and can take up any changes to the November election then.