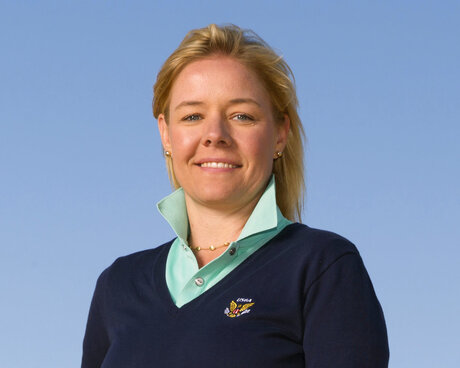 By: EDDIE PELLS (AP)
DENVERCopyright 2020 The Associated Press. All rights reserved. This material may not be published, broadcast, rewritten or redistributed.
39.7392-104.985

DENVER (AP) — Sarah Hirshland's biggest coup to date as a sports executive was brokering the billion-dollar deal that moved the TV home of golf's U.S. Open from NBC to Fox.

Her next mission, as CEO of the U.S. Olympic Committee, will be more delicate — repairing a frayed relationship between athletes and a community that has grown wary of the governing body after a slew of sex-abuse cases they feel were not handled appropriately .

The USOC announced the U.S. Golf Association's chief commercial officer as its new CEO on Thursday. Hirshland will replace Scott Blackmun, who resigned earlier this year to deal with health issues that undercut his ability to handle the crisis that engulfed the federation.

In some ways, the hire of the 43-year-old mother of three, a graduate of Duke, was no surprise. Given the circumstances, the USOC was expected to hire a woman, and the fact that she used to work alongside Casey Wasserman, who chairs the LA 2028 Olympic effort, earned her high marks from what will be the USOC's closest working partners over the next decade.

"I know firsthand that Sarah is a visionary leader," Wasserman said.

But with much of the USOC's marketing and business efforts moving into the hands of the LA organizers, chairman Larry Probst said one of Hirshland's biggest tasks, outside of repairing relationships with athletes, will be shoring up support among lawmakers in Washington.

The USOC has come under increased scrutiny of late in the Capitol, with its leaders being grilled in a handful of hearings over what has largely been viewed as their slow response to the mushrooming sex-abuse crisis.

Though the USOC receives no federal funding, Congress has ultimate authority over the federation via the Ted Stevens Olympic and Amateur Sports Act. When asked about her experience in lobbying and public policy, Hirshland laid out no specifics.

"I have spent, as you might imagine, time in and around the governance of sport within the context of the role of the USGA," said the key architect of the deal that more than doubled the USGA's take for TV rights, up to $1.1 billion over 12 years. "This will be a distinct opportunity for me and one I'm looking forward to."

At the USOC, Hirshland will make $600,000 a year with a chance for a bonus of up to 50 percent. It's a remarkably low salary for the leader of an organization who has to tend to relationships with 43 domestic Olympic sports organizations, to say nothing of the thousands of athletes, donors, fans and the International Olympic Committee, which has proven a thorn in the side of the USOC for decades. (The Olympic TV deal with NBC, meanwhile, is negotiated by the IOC and locked up through 2032.)

But Hirshland's top task will be restoring credibility to the USOC's efforts to provide safe atmospheres for its athletes.

Sex-abuse scandals in swimming, gymnastics and taekwondo —to name a few — forced the USOC to create more uniform standards to protect athletes across all Olympic sports.

Under Blackmun's tenure, the USOC helped open the U.S. Center for SafeSport, which took over the duty of investigating sex-abuse cases in Olympic sports and meting out the punishment.

But the USOC's off-and-on portrayal of itself as a federation that only truly oversees the athletes during the three-week Olympic period every two years rubbed many people wrong, and made it sound as if its leaders weren't ultimately responsible for the welfare of the athletes.

"I ... recognize the challenges ahead as we navigate this critical moment in the USOC's history," Hirshland said. "We must protect, support and empower athletes, young and old, elite and beginner."

The USOC finds itself a defendant in a number of lawsuits filed by athletes and even former U.S. gymnastics coordinator Martha Karolyi, all of which seek damages because of its role in the scandal.

The USOC's interim CEO, Susanne Lyons, said the federation attempted to identify sex-abuse victims to be part of the search committee, but was prevented from reaching out because of the pending lawsuits.

Hirshland is the third woman to hold the title of CEO, following Lyons and Stephanie Streeter, whose brief tenure in 2008-09 was riddled with infighting and confusion and led to her departure.

"It's a powerful moment for the USOC and for me, personally," Hirshland said. "And while I don't look at this as being a female CEO, I'm proud to be a woman, and even more proud to be CEO of the USOC. If I can do both things well, that'll be good for the entire community in which we operate."