From scarcity to abundance: US faces calls to share vaccines 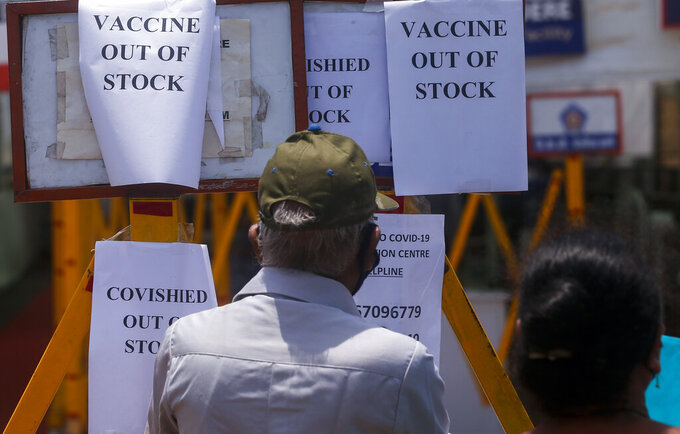 FILE - In this April 20, 2021, file photo, notices informing about the shortage of COVID-19 vaccine is displayed on the gate of a vaccination centre in Mumbai, India. India is battling the world’s fastest pace of spreading infections. Its government has blocked vaccine exports for several months to better meet needs at home, exacerbating the difficulty of poor countries to access vaccine. (AP Photo/Rafiq Maqbool, File)

TEGUCIGALPA, Honduras (AP) — Victor Guevara knows people his age have been vaccinated against COVID-19 in many countries. His own relatives in Houston have been inoculated.

But the 72-year-old Honduran lawyer, like so many others in his country, is still waiting. And increasingly, he is wondering why the United States is not doing more to help, particularly as the American vaccine supply begins to outpace demand and doses that have been approved for use elsewhere in the world, but not in the U.S., sit idle.

“We live in a state of defenselessness on every level,” Guevara said of the situation in his Central American homeland.

Honduras has obtained a paltry 59,000 vaccine doses for its 10 million people. Similar gaps in vaccine access are found across Africa, where just 36 million doses have been acquired for the continent's 1.3 billion people, as well as in parts of Asia.

In the United States, more than one-fourth of the population — nearly 90 million people — has been fully vaccinated and supplies are so robust that some states are turning down planned shipments from the federal government.

This stark access gap is prompting increased calls across the world for the U.S. to start shipping vaccine supplies to poorer countries. That's creating an early test for President Joe Biden, who has pledged to restore American leadership on the world stage and prove to wary nations that the U.S. is a reliable partner after years of retrenchment during the Trump administration.

J. Stephen Morrison, senior vice president and director of the Global Health Policy Center at the Center for Strategic & International Studies in Washington, said that as the U.S. moves from vaccine scarcity to abundance, it has an opportunity to “shape the outcomes dramatically in this next phase because of the assets we have.”

Biden, who took office in January as the virus was raging in the U.S., has responded cautiously to calls for help from abroad.

He has focused the bulk of his administration's vaccinations efforts at home. He kept in place an agreement struck by the Trump administration requiring drugmakers that got U.S. aid in developing or expanding vaccine manufacturing to sell their first doses produced in the country to the U.S. government. The U.S. has also used the Defense Production Act to secure vital supplies for the production of vaccine, a move that has blocked the export of some supplies outside the country.

White House aides have argued that Biden’s cautious approach to promises around vaccine supply and delivery was validated in the wake of manufacturing issues with the Johnson & Johnson vaccine and the subsequent safety “pause” to investigate a handful of reported blood clots. In addition, officials say they need to maintain reserves in the U.S. to vaccinate teenagers and younger children once safety studies for those age groups are completed and if booster shots should be required later.

The White House is aware that the rest of the world is watching. Last month, the U.S. shared 4 million vaccine doses with neighboring Canada and Mexico, and this past week, Biden said those countries would be targets for additional supplies. He also said countries in Central America could receive U.S. vaccination help, though officials have not detailed any specific plans.

The lack of U.S. vaccine assistance around the world has created an opportunity for China and Russia, which have promised millions of doses of domestically produced shots to other countries, though there have been production delays that have hampered the delivery of some supplies. China’s foreign minister Wang Yi said this month that China opposes “vaccine nationalism” and that vaccines should become a global public good.

Professor Willem Hanekom, director of the Africa Health Research Institute and a vaccinologist, said wealthy countries have a stake in the success of vaccination efforts in other corners of the world.

“Beyond the moral obligation, the problem is that if there is not going to be control of the epidemic globally, this may ultimately backfire for these rich countries, if in areas where vaccines are not available variants emerge against which the vaccines might not work," Hanekom said.

The U.S. has also faced criticism that it is not only hoarding its own stockpiles, but also blocking other countries from accessing vaccines, including through its use of the law that gives Washington broad authority to direct private companies to meet the needs of the national defense.

Adar Poonawalla, chief executive of the Serum Institute of India, the world’s largest maker of vaccines and a critical supplier of the U.N.-backed COVAX facility, asked Biden on Twitter on April 16 to lift the U.S. embargo on exporting raw materials needed to make the jabs.

India is battling the world’s fastest pace of spreading infections. Its government has blocked vaccine exports for several months to better meet needs at home, exacerbating the difficulty of poor countries to access vaccine.

The U.S. Department of Health and Human Services’ 2020 annual report also raised eyebrows for a section titled “Combatting malign influences in the Americas," which said the U.S. had convinced Brazil to not buy the Russian shot.

The U.S. Embassy denied exerting any pressure regarding vaccines approved by Brazil’s health regulator, which has not yet signed off on Sputnik V. Since March 13, Brazil has been trying to negotiate supply of U.S. surplus vaccines for itself, according to the foreign ministry.

There are also concerns that the U.S. might link vaccine sharing to other diplomatic efforts. Washington's loan of 2.7 million doses of AstraZeneca's shots to Mexico last month came on the same day Mexico announced it was restricting crossings at its southern border, an effort that could help decrease the number of migrants seeking entry into the United States.

Those sort of parallel tracks of diplomacy will be closely watched as the Biden administration decides with whom to share its surplus vaccine, particularly in Central America, home to many countries where migrant families and unaccompanied children are trying to make their way to the U.S.

“What we would hope to avoid is any perception that increased access to lifesaving vaccines in Central America is in exchange for increased tightening of border security,” said Maureen Meyer, vice president for programs at the Washington Office on Latin America.

As the wait for vaccines continues in Honduras, desperation is growing.

Last week, a private business group announced it would try to buy 1.5 million vaccine doses to help government efforts, though it was unclear how it might obtain them. In March, authorities in Mexico seized 5,700 doses of purported Russian vaccines found in false bottoms of ice chests aboard a private plane bound for Honduras. The company owner who chartered the plane said he was trying to obtain vaccines for his employees and their families. The vaccine’s Russian distributor said the vaccines were fake.

Lilian Tilbeth Hernández Banegas, 46, was infected with COVID-19 in late November and spent 13 days in a Tegucigalpa hospital. The first days she struggled to breathe and thought she would die.

The experience has made the mother of three more anxious about the virus and more diligent about avoiding it. The pandemic rocked her family’s finances. Her husband sells used cars, but hasn’t made a sale in more than four months.

“I want to vaccinate myself, my family to be vaccinated, because my husband and my children go out to work, but it’s frustrating that the vaccines don’t arrive,” Hernández said.

There’s plenty of blame to go around, said Marco Tulio Medina, coordinator of the COVID-19 committee at the National Autonomous University of Honduras, noting his own government’s lackadaisical approach and the ferocity of the vaccine marketplace. But the wealthy can do more.

“There’s a lack of humanism on the part of the rich countries,” he said. “They’re acting in an egotistical way, thinking of themselves and not of the world.”