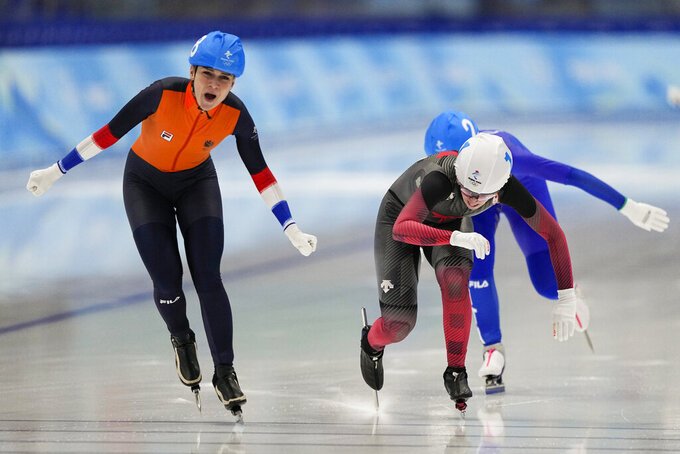 She’ll head home from the Beijing Games with three of ’em.

The Dutch speedskater established herself as the biggest star at the Ice Ribbon with her third individual victory, chasing down Canada’s Ivanie Blondin to win the women’s mass start on Saturday.

In the final speedskating event of these Games, Blondin grabbed the lead on the back straight with about a half-lap to go. But Schouten rallied back with an all-out sprint to win by 0.06 seconds.

“I'm always good on the last straight," the winner said. "I had confidence that I could beat her.”

Schouten let out a scream as she crossed the stripe, celebrating another gold after her victories in the 3,000 and 5,000 meters. In a nifty bookend, she won the first and last speedskating events in Beijing, two weeks apart.

“I'm so happy,” Schouten said. “I worked really, really hard. When I was young, I had a dream to have an Olympic gold. Now, to do it three times, it's amazing.”

Bart Swings won the men's mass start to make history for Belgium. He became the first individual Winter Olympic gold medalist for his country, which had won its only previous gold in pairs figure skating in 1948.

“I always want to raise the bar to the next level,” Swings said.

It was a frustrating final day at the oval for the American team.

Joey Mantia was edged out by the tip of a blade for the bronze in the men's race. The 36-year-old Floridian complained that he was grabbed by another skater, costing him his second medal of the Beijing Games.

Mia Manganello Kilburg matched Mantia with a fourth-place showing in the women's race.

Blondin settled for the silver, adding to the gold she won as part of team pursuit. The bronze went to Italy’s Francesca Lollobrigida, her second medal of the Olympics after claiming a silver in the 3,000.

Blondin thought she had the gold when she surged past Schouten with one turn to go.

“Maybe I went a little bit too early," Blondin said. “I should have been a little more patient. But it's mass start. You never know what can happen. Irene has been so strong these past few weeks, its just an honor for me to be second to her.”

Swings improved on the silver he won at the 2018 Pyeongchang Games in the frenetic event — the only individual speedskating race with head-to-head, pack-style competition instead of racing against the clock in lanes.

“After silver comes gold,” he said. “Once you have that medal, you know how bad you want it again.”

There was plenty of shoving and grabbing, not to mention some shocking falls.

Defending Olympic champion Nana Takagi failed to advance to the final after falling again while leading on the final turn of her semifinal heat — a repeat of the tumble she took to cost Japan the gold in team pursuit.

Reigning world champion Marijke Groenewoud fell in both the semifinals and the final. She was able to get back up after the first mishap and qualify for the medal race.

She went down again and finished 11th.

“It is a crazy race, but for me, it's so much fun," Blondin said. “It's kind of like roller derby out there.”

Mantia, a three-time world champion, initially posted the same time as Lee. But the replay showed the tip of the South Korean’s skate crossed the line just ahead of Mantia’s blade, giving him the bronze by 0.001 seconds.

Mantia claimed that Lee grabbed him as they raced to the line, but no infraction was called.

“I feel like I was cheated," Mantia said. “I felt like his hand was on my arm pulling me back.”

Sven Kramer of the Netherlands ranked last in the men’s final, pushing the pace early on but dropping back when the contenders turned on the speed at the end of the 16-lap race. The 35-year-old Dutch star finished his Olympic career with a total of nine medals, including four golds. He already announced he was retiring after Beijing.

Claudia Pechstein of Germany made the women’s final just three days before her 50th birthday. She took points in one of the interval sprints and finished ninth.

When asked if she was retiring, Pechstein said she hasn't made a final decision. But it's hard to envision she would compete for another four years.

Pechstein carried the flag for Germany in the opening ceremony of her eighth Olympics, the most ever by a female winter athlete. She has five golds and nine medals in a career that also included a doping ban she continues to dispute.

The Netherlands again topped the speedskating medal table, finishing with six golds and 12 medals overall. The United States finished with three medals, its best showing since 2010.

Mantia thought it should've been four.

“I had a little stumble in the last corner,” he said, "but that was still a medal-worthy performance in my opinion.”