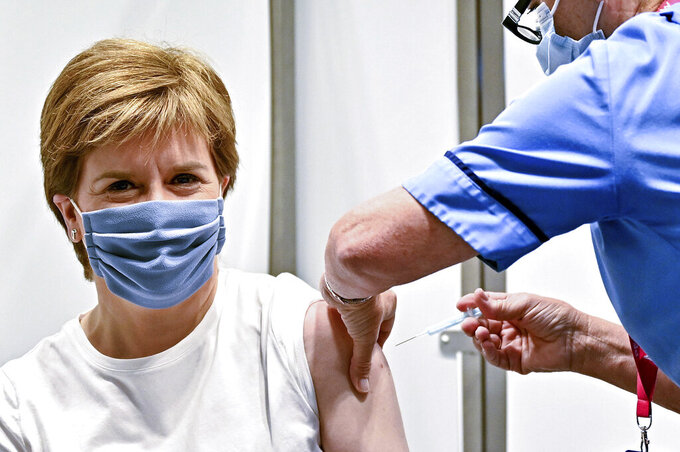 LONDON (AP) — Scotland's leader has defended a ban on nonessential travel between the country and the northwest English city of Manchester after its mayor lambasted the decision and called for compensation.

Scottish First Minister Nicola Sturgeon said Monday that the ban on people from Manchester and nearby Salford entering Scotland was made on public health grounds based on COVID-19 levels in the area. Although Scotland is part of the U.K., its government has powers over matters relating to public health.

New coronavirus infections around the Greater Manchester area are running higher than most places in the U.K., which in the midst of what scientists describe as a third wave of infections as a result of the delta variant first identified in India. Another 10,633 new cases were recorded on Monday, one of the highest daily levels since February, when the U.K.'s second wave of new infections and deaths was coming under control during a strict lockdown.

Recent surveys suggest about 1 in 200 people in the Greater Manchester area have had the virus, three times higher than the rates of infection in Scotland.

“These are public health measures,” Sturgeon told the BBC. “I have a duty, and it’s one I take very seriously, to keep Scotland as safe as possible.”

Andy Burnham, the Labour Party mayor of Greater Manchester, said the ban, which took effect Monday, was “insulting” and had “come out of the blue.” He said he thinks the Scottish government should compensate those who will suffer financially from the ban.

“It’s not just the direct impact on Greater Manchester, it’s on our reputation as a city," he said. “It’s had an impact with people with holiday cottages booked, people who are having to go for work reasons."

Sturgeon, the leader of the Scottish National Party that wants to take Scotland out of the U.K., countered by suggesting that Burnham, one of the highest-profile politicians in the opposition Labour Party, was playing politics.

“I’ve always got on well with Andy Burnham and if he wants to have a grown-up conversation, he only has to pick up the phone. But if, as I suspect might be the case, this is more about generating a spat with me as part of some positioning in a Labour leadership contest in future, then I’m not interested," Sturgeon said.

“I’m serious about doing that job in a way that keeps Scotland as safe as I possibly can," she added.