Seahawks have managed to keep COVID-19 at bay, so far 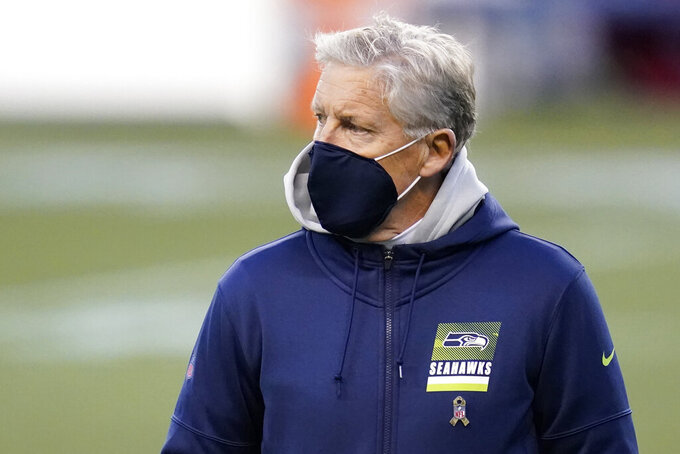 RENTON, Wash. (AP) — Everything in Pete Carroll’s program that he’s created over his decade in charge of the Seattle Seahawks is based upon competition.

It’s remained true, even in the midst of a global pandemic, that Carroll and his staff have figured out a way to make a competition out of keeping COVID-19 from entering the Seahawks' facility and potentially derailing a promising season.

So far, it’s been highly successful.

“It’s an ongoing awareness that we try to maintain,” Carroll said. “You know, it’s not unlike us to try to figure out a competition and everything, so we figured one out.”

Until last weekend, the Seahawks had been the only team in the NFL not to put a player on the NFL’s reserve/COVID-19 list during the regular season. That changed when defensive tackle Bryan Mone was placed on the list last Saturday, but Carroll said earlier this week that was a precaution as a close contact and Mone had not tested positive for the virus.

Still, getting all the way into December before needing to put one player on the list appears to be a massive accomplishment considering the issues that have befallen other teams.

“I think it’s the discipline, the understanding. The guys kind of buying in on this is just a weird season, and so some of these things that we’re up against this year is maybe things that we may or may not want to do, but it’s something that we have to do,” Seattle linebacker Bobby Wagner said.

“To not only make sure that we good, but our family good and everybody else’s families. So I think we’ve done a good job of just focusing on that.”

Carroll has been harping on the importance of creating a bubble around his team without being in a bubble since the start of the preseason back in August. For example, players have been asked to inform the team when they may have any visitors from out of town, and the Seahawks have arranged testing for those people.

It’s part of the process Carroll and his staff created, feeding into the idea a pseudo-bubble is the best way to be successful.

“It’s all back to the discipline that it takes them to uphold the regimen. I wish everybody could benefit from that,” Carroll said. “We’re highly motivated and we’ve got all the facilities, we’ve got everything going for us, everything to back it up. But at least there is a way, an illustration of how you can do it, and we’ll try to hold on to this as long as we can.”

But of course, Carroll has figured out a way to create a competition for when the team is inside its facility. Using the tracking monitors players and staff are wearing inside the building and the accompanying software, Carroll and his staff have devised a way to see which position group is succeeding at being the most spaced out.

Carroll first talked about his little competition on SiriusXM NFL Radio last week and expanded on its this week. He said the tight end group and the specialty players — kicker, punter, long snapper — are currently in the lead.

Carroll said the “scores” are posted each week to help continue to promote awareness.

“This is such an all-encompassing challenge. Every second of the day, whether you’re here or whether you’re somewhere else something could affect the outcome,” Carroll said. “So we’re trying to maintain. It all started off with attitude and a really strong, clear conscience or how to maintain the kind of decision making you need to pull this off.”

NOTES: Seattle designated CB Quinton Dunbar (knee) and RB Rashaad Penny (knee) to return to practice on Wednesday. Dunbar has been on injured reserve and missed the past month, while Penny has been out all year recovering from a torn ACL suffered late last season. Dunbar could have a chance to play as early as Sunday vs. the Jets. ... Carroll said RT Brandon Shell (ankle) is expected to practice this week after missing the past two games. ... Seattle signed QB Alex McGough to the practice squad. McGough was a seventh-round pick of the Seahawks in 2018 and his signing is additional depth protection Carroll wanted after the COVID-19 issues in Denver recently.