Searching for footing in a life nearly extinguished by COVID 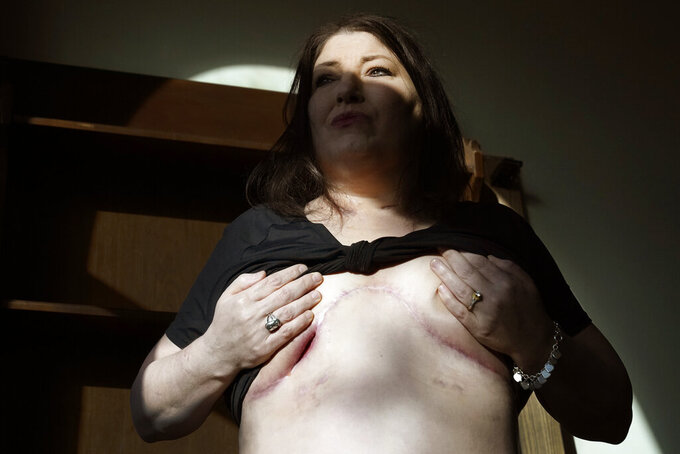 Kari Wegg shows the "clamshell" scar on her chest at her home in Westfield, Ind., on Wednesday, March 24, 2021, just a few months after undergoing a double-lung transplant. Wegg worries about how long her new lungs will last, despite reassurances from doctors. (AP Photo/Charles Rex Arbogast)

WESTFIELD, Ind. (AP) — Before the coronavirus nearly killed her, Kari Webb relished life as a nurse to newborns and a mother of two teenagers. She and husband Rodney bred Bengal cats in their spare time and on weekends, she battled fellow Viking reenactors with a 10-foot spear.

She survived thanks to a double lung transplant, one of the first on a COVID-19 patient. Now, though, she’s struggling to find footing in a life forever changed by the virus.

Clutching Rodney’s hand minutes after getting her vaccine recently, Kari’s legs wobbled, then surrendered to gravity. Rodney, a respiratory therapist used to lifting incapacitated COVID patients, grabbed her before she could fall. Doubts that welled during those long months in the hospital crept back in.

“Rodney always told me not to worry, that he’s got it, that he’s going to take care of me, that he got me this far and everything is going to be OK,” she says. “But I worry that it’s not.”

EDITOR’S NOTE — First in an occasional series, COVID’s Scars, looking at how some of those battered by the pandemic are trying to recover after a year of pain and loss.

When the cough started in mid-July, Rodney thought it was allergies until testing positive for COVID. Days later, Kari was laboring to breathe.

On a ventilator, her respiratory system was failing, until the only option became hooking her to a machine built to take over for the lungs, known as ECMO.

“So much information, so many paths to take, so many decisions to make not knowing where they’ll lead,” Rodney posted to friends and family following Kari’s case.

And the most painful decision, one doctor warned, was fast approaching: whether to disconnect Kari from the machine keeping her alive.

At Ascension St. Vincent Hospital in Indianapolis, Dr. Sangeeth Dubbireddi, cycled back on duty after time off. The survival rate for patients like Kari was not encouraging, he told Rodney. Still, the damage to her body was almost entirely confined to her lungs.

As staffers worked to stabilize Kari, Dubbireddi called hospitals with lung transplant programs. Chicago’s Northwestern Memorial Hospital agreed to take Kari -- if she was freed of the virus.

In early September, Kari’s caregivers formed a semi-circle around her bed while a chaplain offered a prayer.

“Then we held on to the silence,” eyes closed, Dubbireddi says, focused on transferring their hopes to Kari, one of their own.

“It was so striking to see how different she looked before this hit her,” says Dr. Ankit Bharat, director of Northwestern’s lung transplant program. “She had all these tubes coming out of pretty much all over her body. And I frankly could not recognize that this is the same person.”

With Kari weaned off sedation, the transplant process moved forward. For COVID patients, though, it was still a path in the making.

Before the pandemic, Northwestern performed 40 lung transplants a year. Through September, though, just 15 COVID-19 patients worldwide had received new lungs, partly because of worries they might not survive.

On Oct. 2, Bharat’s team worked to stem internal bleeding while a bypass machine kept Kari alive, then replaced her lungs with those from an anonymous donor.

In the months after, she gained strength in rehab, but it was offset by doubt. With visitors restricted because of resurgent COVID cases, she had hours to ponder what lay ahead.

“I would be alone at 3 a.m. and I really felt that loneliness,” she says. “My life had just changed so much ... and it really brought home how fleeting things really are and that I can’t miss out on the rest of my life.”

The sun won’t rise for half an hour yet. But Rodney’s at work and those boys won’t wake up on their own.

“Gavin! Get Gunnar up now!” Kari hollers, her voice ricocheting up the stairwell with startling power.

“I just breathe in and let it go,” she says. Then the minutiae of the day takes over.

Leaning over a pan of French toast, Kari reminds herself to avoid eggs because her immune system can’t chance salmonella. She yells to Gunnar that he better make that bus -- a mom whose hands are still prone to tremors can’t drive him to school.

Kari’s return home in late January felt like crossing a finish line, Rodney says. But she faces hurdles, along with everyone else in the household.

The cats were sold because they carry bacteria that might endanger Kari’s health. Vents throughout the house are missing their covers, as Rodney, his mother, Katie, and contractors finish weeks of repainting to protect Kari’s new lungs. There are 29 medications to track, an incision that won’t heal.

“When am I going to get back my endurance and my stamina and be able to do 12-hour shifts?” Kari asks.

The hospital where she worked has told her that if and when she is ready to come back, they’ll have a job for her. But like other hospitals with employees incapacitated by COVID, it recently informed her she’d need to go on long-term disability and off the payroll.

The fact that most COVID patients with transplants were quite healthy before getting the virus, leaves many unprepared for the physical and emotional climb after surgery.

“These patients like Kari ... they’ve never thought about a life-and-death situation. So the anxiety, the post-traumatic stress of almost dying could potentially take a long time to overcome,” Bharat says.

Each week, though, brings moments of reassurance -- the first dinner out at a restaurant, a reunion with the Viking reenactment group.

“She just keeps on focusing on what she can do, rather than what she can’t do,” said Dana Downing, a friend who leads the group.

For now, that means quiet days, knitting and reading. It’s not the way things were before COVID-19. But life is measured differently now.

Kari’s eyes sparkle and her smile beams. And Rodney reaches over and takes her hand.

AP videographer Teresa Crawford in Chicago contributed to this story.