SEC revamps December schedule to make up for postponed games 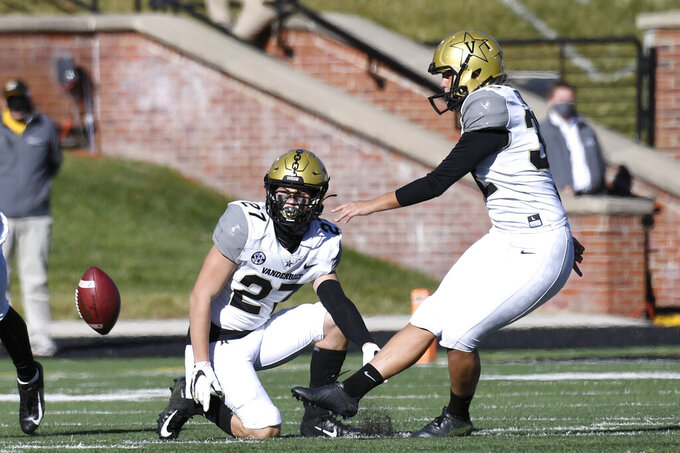 Vanderbilt's Sarah Fuller, right, kicks off as Ryan McCord (27) holds to start the second half of an NCAA college football game against Missouri Saturday, Nov. 28, 2020, in Columbia, Mo. With the kick, Fuller became the first female to play in a Southeastern Conference football game. (AP Photo/L.G. Patterson)

The Southeastern Conference has announced a revamped schedule for Dec. 12 and Dec. 19, including Vanderbilt's game at No. 11 Georgia that could not be played as scheduled on Saturday because of coronavirus concerns.

The rescheduled games announced Friday were made necessary following postponements due to the SEC's COVID-19 protocols.

Vanderbilt was forced to postpone Saturday's game at Georgia because the Commodores’ roster fell below minimum requirements. The game has been rescheduled for Dec. 19.

With Vanderbilt’s specialists unable to participate at Missouri last week due to the COVID-19 protocols, Sarah Fuller made history as the first woman to play in a Power Five conference game. Fuller kicked off to open the second half of Missouri’s 41-0 win and was expected to be in uniform again for the game against Georgia.

The COVID-19 concerns are not limited to the SEC.

No. 3 Ohio State appeared to be on track to play after school officials canceled last week’s trip to Illinois due to a spike in COVID-19 cases. Ohio State said Friday in a statement it was prepared to travel Friday to East Lansing, Michigan, for its Saturday game against Michigan State.

No. 13 Oklahoma also appears set to get back on the field after its game last week against West Virginia was postponed. The Sooners host Baylor on Saturday.

This week, 12 of 56 games scheduled were postponed or canceled. That number of percentage is down from recent weeks and included Washington at No. 17 USC, which was pushed back from Friday to Sunday. It also includes No. 25 Liberty being unable to play at No. 12 Coastal Carolina. No. 8 BYU has stepped into to replace the Flames, who had COVID-19 issues.

Vanderbilt has had two games postponed because of the virus. The Commodores’ matchup at Missouri scheduled for Oct. 1 was played last week after the SEC also postponed the Vanderbilt-Tennessee game originally set for that day.

The SEC on Friday announced the Vanderbilt-Tennessee game has been rescheduled for Dec. 12. The league also said Georgia's game at Missouri, originally scheduled for Nov. 14, will be played on Dec. 12.

The Vanderbilt-Georgia and Texas A&M-Tennessee games would not be played if the Bulldogs and Aggies, respectively, qualify for the SEC championship game.

Georgia is a long shot for the game at best. No. 6 Florida will represent the SEC East in the championship game unless it loses its last two regular-season games against Tennessee and LSU. No. 1 Alabama leads the SEC West.