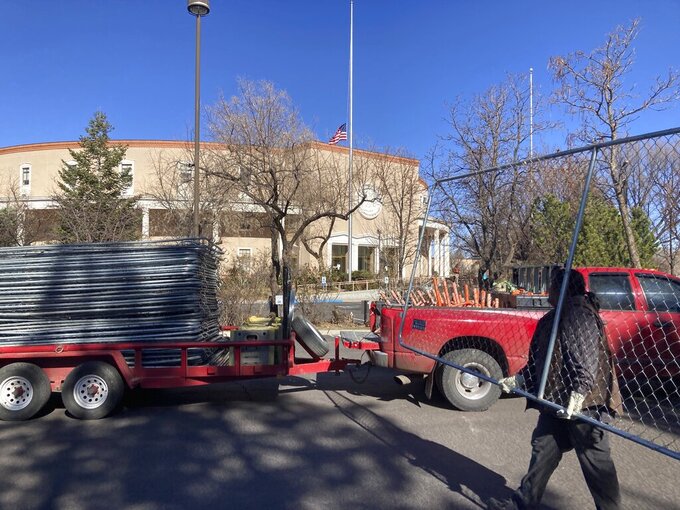 Workers remove segments of the chain-link fence around the New Mexico state capitol in Santa Fe on Saturday, March 27, 2021. The fence was erected by National Guardsman and State Police officers following Jan. 6, 2021, riots in Washington, D.C. The added security cost at least $700,000 with over $15,000 going for the fence rental, according to a March 12, 2021, response from state officials that did not include the cost of removing it. (AP Photo/Cedar Attanasio)

SANTA FE, N.M. (AP) — A security fence erected around the New Mexico state capitol in January was dismantled over the weekend, removing the most visible sign of the unprecedented security measures taken by the state after the Jan. 6 riots in Washington, D.C.

Workers were seen Saturday taking down segments of the chain-link fence and loading them onto a trailer.

The fence was erected in Santa Fe and guarded by National Guard Soldiers and State Police officers following the U.S. Capitol riot. The added security cost at least $700,000 with over $15,000 spent on renting the fence, according to a March 12 response from state officials.

In the past few weeks, the State Police and National Guard reduced their presence, with fewer checkpoints in the area around the capitol. The remaining security forces left abruptly at the conclusion of the regular legislative session on March 20.

The building is traditionally open to the public and lobbyists. Before the pandemic, the Roundhouse’s center rotunda was a site for musical performances, field trips, and even massages. This year, it was a site for COVID-19 testing.

Despite being closed during the pandemic, the entrance to the building was the site for protests last summer and fall, including civil rights marches in support of Black Lives Matter and against COVID-19 restrictions laid out in emergency health orders.

The fence effectively pushed all demonstrators out of sight to the streets surrounding the complex.

State Democrats who have set the rules have touted an increase in pandemic-era participation by the public via Zoom, saying that remote options for comment are making the Legislature more accessible to people across the large, rural state. Comments were also allowed to be phoned in.

The practice could continue even after in-person public comment is allowed.

"And Zoom in the House is here to stay. We’re going to figure out how to make it be part of the hybrid process going forward,” said Democratic House Majority Speaker Brian Egolf.

The public will still be barred from entering the Roundhouse and its legislative chambers in a special session starting Tuesday. Its focus is to pass legislation to l egalize and regulate recreational cannabis.