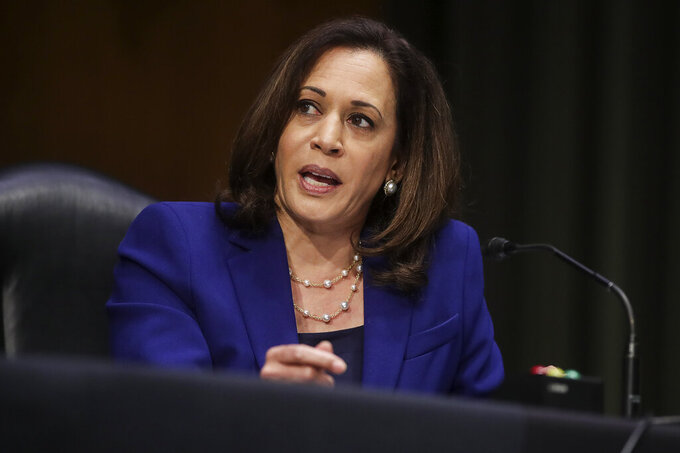 Sen. Kamala Harris, D-Calif., speaks during a Senate Judiciary Committee hearing on police use of force and community relations on on Capitol Hill, Tuesday, June 16, 2020 in Washington. (Jonathan Ernst/Pool via AP)

WASHINGTON (AP) — The Senate has approved the nomination of a Mississippi judge to a federal appeals court, the 200th federal judge named by President Donald Trump and confirmed by the Republican-controlled chamber. It's the highest number of judicial nominees confirmed at this stage of a presidency in four decades.

Cory Wilson was elevated to a seat on the New Orleans-based 5th U.S. Circuit Court of Appeal despite Democratic objections that he has a record of working to undermine voting rights of African Americans and other minorities.

Approval came on a nearly party-line, 52-48 vote Wednesday. Maine Sen. Susan Collins was the only Republican to vote against Wilson.

Wilson, a former Republican state legislator, has been a state appeals court judge for 16 months. The 5th Circuit, which hears cases from Louisiana, Mississippi and Texas, is considered one of the most conservative appeals courts in the nation.

Democrats and civil rights groups said Wilson has been a longtime proponent of voter ID laws that disproportionately harm communities of color, students, voters with disabilities and the elderly. He also has made false claims about the prevalence of voter fraud in the United States and expressed opposition to enforcement of the federal Voting Rights Act, Democrats said.

"Judge Wilson’s troubling record on voting rights is highly relevant to his nomination,'' said California Sen. Dianne Feinstein, the top Democrat on the Senate Judiciary Committee. The 5th Circuit is a majority-minority circuit, she noted. About 55 percent of those who live in the region are minorities.

"The Senate should not confirm a nominee who would work to further restrict the right to vote from the bench,'' Feinstein said.

Feinstein and other Democrats said Wilson has demonstrated hostility to voting rights in Mississippi. In 2011, he dismissed concerns from the Mississippi chapter of the NAACP that a voter ID law would suppress the vote as “poppycock.'' In 2013, he said then-Attorney General Eric Holder “whined” that voter ID laws were part of an orchestrated effort by Republicans to suppress poor and minority voting.

Sen. Kamala Harris, D-Calif., called Wilson’s record “extremely problematic at this moment in time" as the nation faces a reckoning over racism in the wake of the police killing of George Floyd and other African Americans.

Harris, one of three Black senators, said it would be “a particular affront to the people of Mississippi, a population that has 38% African Americans, to have Judge Wilson preside over voting rights cases in that state.″

Senate Majority Leader Mitch McConnell, R-Ky., called Wilson “an outstanding nominee,” and noted that he has served as a lawyer in private practice, a state lawmaker, adviser to top state officials and a judge. The American Bar Association rates Wilson as “well-qualified.”

McConnell, who has made confirmation of judicial nominees a priority, said that with Wilson's confirmation, there will be no appeals court vacancies in the nation for the first time in at least 40 years.

“As I’ve said many times, our work with the administration to renew our federal courts is not a partisan or political victory. It is a victory for the rule of law and for the Constitution itself,'' McConnell said.

Democrats countered that McConnell and Trump were focused on far-right judicial nominees at the expense of legislation to address the COVID-19 pandemic, gun violence, voting rights and other issues.

"Over the last three years, instead of focusing on legislation to help the American people, Leader McConnell and President Trump have dedicated almost every ounce of their energy and focus to packing the courts with right-wing ideologues who they know will do their bidding from the bench,” said Senate Democratic leader Chuck Schumer of New York.

Carrie Severino, president of the Judicial Crisis Network, a group that champions conservative judges, called the 200-judge milestone “a tremendous accomplishment” that will have an impact on federal courts for decades to come. The 53 appeals court judges and two Supreme Court justices approved under Trump “are among the finest legal minds who will interpret the law as it is written, not make it up based on their own politics and policy preferences," she said.

But Christopher Kang, chief counsel for Demand Justice, a liberal group that has opposed most of Trump’s judicial nominees, said it will take years to undo the damage caused by Trump and McConnell.

While President Barack Obama “picked the most diverse judicial nominees in history,” McConnell routinely blocked them, Kang said, leaving more than 100 vacancies for Trump to fill. “Trump has done so overwhelmingly with young, white men who have done enormous damage to our courts’ diversity and legitimacy," Kang said.

Collins, who also opposed a federal appeals court judge confirmed last week, said Wilson had made inappropriate comments about the Affordable Care Act, the health law passed under President Barack Obama. Before becoming a judge last year, Wilson frequently criticized Obama and other Democrats and called passage of that law “perverse” and “illegitimate.″ Wilson also wrote that he hopes the U.S. Supreme Court strikes down the law, which Obama signed in 2010.

"While Judge Wilson is entitled to his personal views, his comments about the legality of the Affordable Care Act ... raise doubts about his ability to rule impartially on matters where he holds very strong personal views,'' said Collins, one of the most vulnerable incumbents in the Senate.

Wilson, 49, pledged during his confirmation hearing to abide by a 2012 Supreme Court ruling that upheld the health care law.