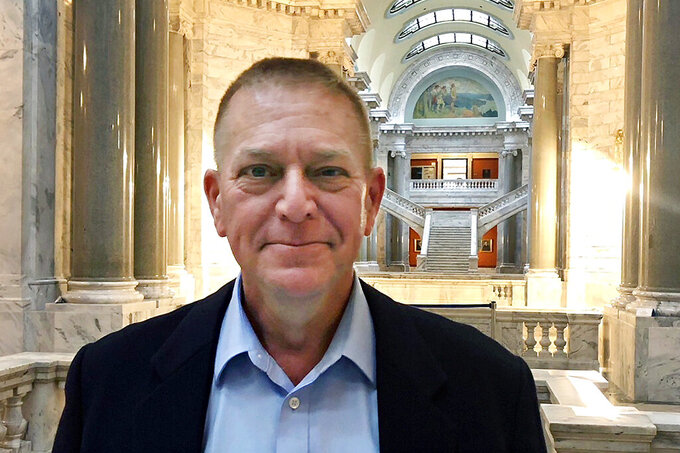 FILE - In this Dec. 27, 2019, file photo, Democratic candidate for U.S. Senate Mike Broihier poses for a photo in Frankfurt, Ky. Ex-Marine pilot Amy McGrath, who seemed to be gliding toward a primary victory in Kentucky, has come under heavy fire from both directions in the closing days of the Democratic contest to determine who challenges Republican Senate Majority Leader Mitch McConnell in the fall. Broihier and Freshman state Rep. Charles Booker support a universal basic income and Medicare for All — ideas that McGrath has resisted. (AP Photo/Bruce Schreiner)

FRANKFORT, Ky. (AP) — Presidential primaries may top the ballot June 23, but there are several others races to be decided in Kentucky including party nominations for a U.S. Senate seat. Other contested races on the ballot include five U.S. House seats, 11 contested legislative primaries and a Kentucky Supreme Court seat. Here’s a summary of the state offices and candidates on the ballot:

4th District: Republican Rep. Thomas Massie, who drew Trump’s ire on coronavirus relief, faces a strong challenge from Covington attorney Todd McMurtry. It is his first contested primary since the former Lewis County judge-executive was elected in 2012. Two Democrats are running in the GOP-dominant district that spans parts of northern and central and eastern Kentucky: business consultant Shannon Fabert of Hebron and nurse practitioner Alexandra Owensby of Fort Thomas.

5th District: Republican incumbent Rep. Hal Rogers of Somerset, who took office in 1981, is being challenged by Gerardo Serrano, a firearms enthusiast who lives on a small farm in Jackson County.

Due to the coronavirus pandemic, all state registered voters were deemed eligible to submit an absentee ballot, which must be postmarked by June 23. Some counties have said they won't post results on election night but will announce them by June 30. A limited number of polling places were open for voters who wanted to cast ballots early or on Election Day.